Look at this image. 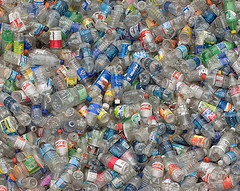 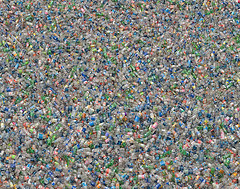 Welcome to the work of Chris Jordan, a Seattle-based photographer and environmental advocate. Jordan takes beautiful photographs of waste. His hope: to disgust us to change. 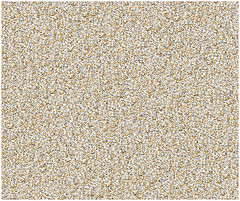 Disappointingly, the jpegs on your computer screen can barely do justice to Jordan’s massive, high resolution photographs, most of which take up entire walls in galleries. Each image illustrates a grouping of America’s waste. But, as Jordan so often prefaces, capturing dissipation in a single photograph is impossible. The true scale of our mass consumption’s accumulation is invisible. Its magnitude is undetectable as it is spread throughout garbage dumps, storage units and landfills from Fort Wadsworth, Staten Island to a fermenting heap in Kenya.

Given the disconnect, Jordan uses “computer shenanigans” or photo shop to illustrate the true scale of our nation’s waste. He starts out with a single image, multiplying it over and over and over again to reach the statistic of our consumption. This image, for example, represents the number of cell phones America discards every few minutes. 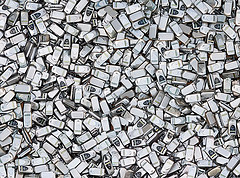 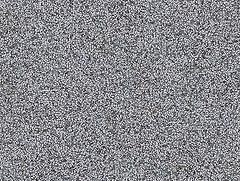 To explain the shocking magnitude of our waste, Jordan has also released a video installation, Intolerable Beauty and Running the Numbers. The video premiered via the Ingeo NatureWorks Creative Gallery in New York City on Earth Day (Aprill 22nd) and will travel around the world in conjunction with Ingeo Earth Month ending on World Environment Day (June 5th). You can catch Jordan’s video as it travels with Ingeo’s Earth Month exhibit (popular stop off points include Paris and Tokyo) or you can find the film on Jordan’s website (chrisjordan.com).

I encourage you to watch this film. It is mind-blowing and depressing, but also inspiring. As Jordan says in his own words, “ it may not be the most comfortable terrain, but I have heard it said that in risking self-awareness, at least we know that we are awake.”