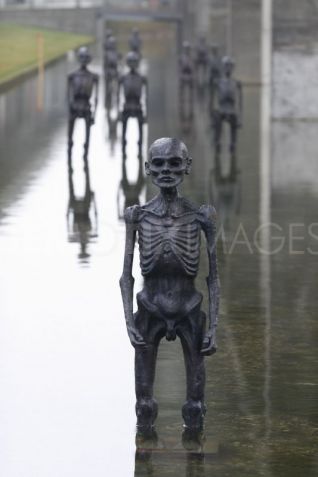 No successful movement works without important art. Where would the hippies have been without their unique (ehm, hallucinogenic) posters, 2nd wave feminism without all those novels and creative nonfiction writings, the Vietnam protests without the music, or Civil Rights without heart-wrenching photography? Not only did these pieces of art change opinions and inflame feelings at the time, all of these movements (and artistic statements) still resonate and influence today.

The plethora of art being displayed in and around the Copenhagen climate change negotiations is notable for both its volume and variety, and indicates that the movement to ensure a healthy future for the planet and it’s inhabitants is more than just a job for policymakers. 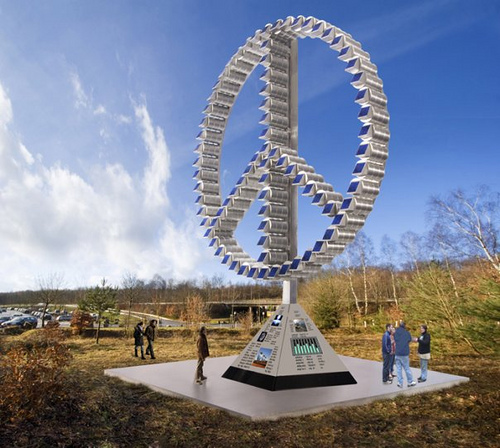 The people affected most by climate change are also the world’s poorest. For anyone who hopes for world peace, nothing could be more dividing (and enraging) than the world’s wealthiest continuing to pollute with greenhouse gases at the expense of those who already have so little.

Artist Fred George created this 9-foot sculpture for Copenhagen (it is a traveling model of the original 50-foot version) from used oil barrels and solar panels, which can feed into a city’s electrical grid in places where it is a permanent installation. “What a great opportunity to have a global conversation about preserving the environment and promoting alternative energy. We want people left with the vision of peace: peace with nature, peace within, peace worldwide,” says George.

Where: The Solar Peace sculpture is available for viewing at the green art hotel, Hotel FOX, located at Jarmers Plads 3, December 10-20, 2009. Paramount Pictures will present An Inconvenient Truth by Al Gore at the Hotel FOX at 5 and 7 p.m every day during COP 15. 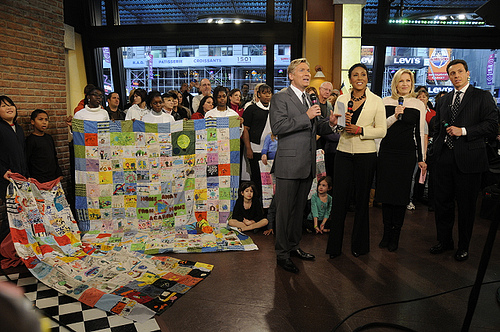 The Climate Quilt by Children of the World

The Climate Quilt Campaign, is an huge quilt made up from individual pieces individually designed by students from around the world. Indeed, it is the children of today who will be dealing with the bulk of the effects of global warming and they will need to work together to clean up the mess past generations have left behind.

The “pledge patches” are made from recycled materials and contain the students’ “individual promises to preserve the future of the planet”. The quilt in its entirety will be unveiled on Earth Day 2010. Parts of the quilt have been making appearances worldwide, and according to the Climate Quilt site, “Copenhagen is an important stop in this campaign with different portions of the climate quilt being displayed and presented at different events during the Climate Conference.”

Where: Various Events at COP15 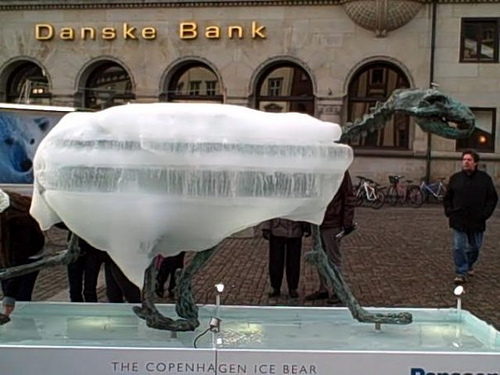 The bear above started out being a complete ice sculpture, but like the globe’s ice caps, it is slowly melting. At 1.8 metres high it is exactly the same in height as “the average thickness of the floating sea ice in the Arctic Ocean measured during the Catlin Arctic Survey earlier this year. Scientists have observed that ice under 2 metres thick is almost certainly too thin to survive the summer melting season, leading inevitably to a further shrinking of the remaining sea ice,” according to the Icebear project site.

Unlike most art, the public are encouraged to touch the melting bear, with the take-away idea that each person has a small, but ultimately measurable impact on the world’s climate. 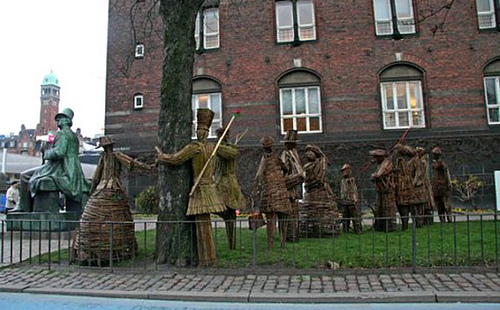 The Tree Hugger Project, by Wiktor Szostalo and Agnieszka Gradzik

Made from twigs, sticks, vines and branches, there are actually two “Tree hugger” sculptures in Copenhagen. Lonely Tree-Lonely People was the first creation, originally exhibited in Poznan, Poland for COP14, and Praying for the Victims of Clear-Cutting is a new installation, which also features original music and interactive components. The artists want to remind us that we are not as detached from nature as it seems (hence the human forms are composed of biomass) and reminds us of our close ties to healthy forests, which are an integral part of mitigating climate change.

A hotly-debated issue at COP15 is how best to protect native and old-growth forests from being turned into consumer products like toilet paper and cheap furniture, since these ecosystems some of the largest carbon sinks that exist (and are often home to endangered plants and animals). 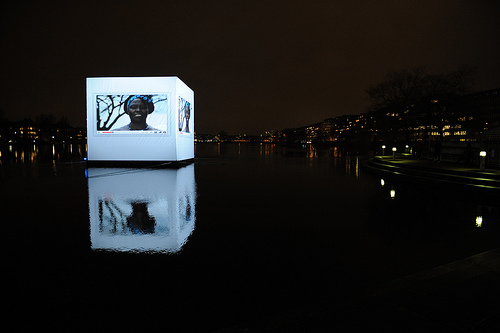 CO2 Cube: Visualize a Tonnage of Change by The Millennium Project

Global warming is an abstract concept, and it’s not only a slow moving disaster, it’s equally hard for the general public to understand the drivers of climate change, which include greenhouse gases like methane and CO2.

The CO2 cube is a life-sized 3-D sculpture which takes up exactly as much space as 1 ton of carbon dioxide. According to the project’s site, “This is the amount of CO2 the average person in an industrialized country emits each month.” The project’s overall goal is to get everyone who sees it to produce 1 ton less CO2 in 2010. This partnership between The Millennium Project and the UN Department of Public Information, is powered by Google and YouTube, and produced by Obscura Digital.

-For a listing of more of the art that’s being displayed in and around Copenhagen in association with COP15, check out the Arts for COP15 website.

-For more coverage of COP15 art projects both within and outside Copenhagen, check out Inhabitat.

Thanks to Chris Baskind at More Minimal for story assistance.

Bring the Trees Back to Armenia!