Crude is the story of a community of 30,000 tribal members in the Amazonian jungle of Ecuador who hold a corporation to bear for its crimes against their land, their livelihood, and most importantly, their lives. The film follows the intricacies of what has been called the “Amazon Chernobyl.”

The indigenous population claims that Chevron, the parent company to the former Texaco, spent thirty years contaminating the air, land, and water of an area the size of Rhode Island which is now called the “death zone.” Cancer, leukemia, and birth defects are among some of the effects of Big Oil. The film was shot and edited over a period of three years, with Berlinger and the crew sacrificing their own safety by facing both environmental (toxic fumes, disease, searing equatorial heat) and man-made dangers (shooting near the Colombian border where drug runners and FARC rebels are very active) to capture a story they felt must be shared with the rest of the world. 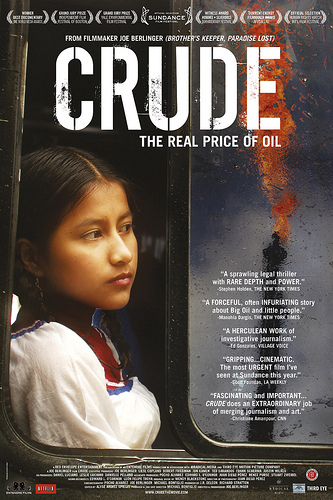 Berlinger’s cinematic sensibility paints a picture that captures the lush vitality of the Amazon, the horrendous atrocities endured by the tribespeople, and the complicated path that social justice must traverse, all the while avoiding cliche and stereotypes. Amazon Watch and the Rainforest Foundation have both been instrumental in bringing the Ecuadorian devastation to the public eye.

Trudie Styler, Sting’s wife, and noted activist, appears in the film to lend celebrity to the cause. Repeatedly referring to the Amazon as “the lungs of the earth,” Styler and others point to the far more serious nature of the toxicity than mere dollars can assuage. If Ecuador is in trouble, we are ALL in trouble. If tribe members cannot fish or swim, that affects us directly. Transnationals can no longer act in a vacuum of backyard antics.

Vanity Fair featured an article in the 2007 Green Issue on the case in Ecuador, and attorney Pablo Fajardo, who passionately represents the plaintiffs. In one scene in the film, Fajardo notes that he is not intimidated by the high powered legal team because he has truth on his side, which makes his work that much easier. He doesn’t have to work diligently to create lies about what is happening.

Without sensationalizing the health effects of the toxic swamp left in the Ecuadorian jungle, Berlinger simply allows the water to tell the tale. The water, the rivers, the streams, and pools appear fresh from a distance as children play, women wash, and people drink. Once approached, the rainbow sheen of petrol catches the light and the scent of gasoline sends heads reeling. The ground is soft sludge as the pollutants work their way through the soil and into the Earth. One of the Texaco/Chevron representatives claims: “this is not contamination, this is industrial exploitation that your government permitted.” Amazing. This film must be seen.

In order for this film to have a chance of being seen by the rest of the country, it must nearly sell-out in NY, LA and SF, so tell your friends, blog about it, spread the word…go see this film. Because the film doesn’t have huge marketing dollars, it’s up to people like you and me to spread the word online.