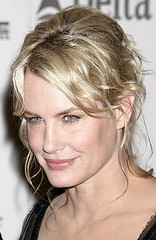 Though this isn’t strictly an environmental story, it does involve one very eco-savvy movie star, Daryl Hannah, and it is about women’s rights, so I figured it deserved a space on Eco Chick. And if you haven’t checked out dhLoveLife, Hannah’s awesome blog (and videos that will make you cry) you should go right now. It’s quite cool looking and has environmental and animal-rights content made by Hannah herself.

Apparently, Daryl Hannah was kidnapped and almost sold into a prostitution ring in the 70’s when she first came to California. Now, in addition to the environmental work she has been involved with for quite some time, (including veganism, being arrested for treesitting and driving a biodeisel El Camino) Monsters and Critics reports that she is going to be campaigning against the international sex trade, which targets pre-teen and teenaged girls.

She says, “The more I learn, the more I am moved to take action.” Hannah says she will go undercover strapping microphones to her body and carrying a hidden camera as she travels to brothels around the world to document the disturbing truth in a film she will fund herself.

Simple Ways to a Green 2008 Holiday

In Praise of Stay-at-Home Holidays