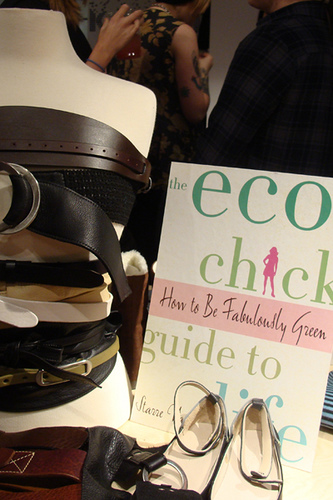 Eco Chick is three years old! To celebrate her growing up (there are over 900 posts!) as well as the launch of my book, based on the blog, The Eco Chick Guide to Life: How to Be Fabulously Green, called for a kid’s themed party of course! I didn’t know how I was going to pull it together, but in just two days, the fabulous Kate McGregor, owner of Kaight, my favorite ecoboutique, and Arina Vikdorchik (AKA Arina Greenaholic for her eco party-planning fabulousness) offered me a venue, and some extra time and hands to help, and I HAD to go for it! 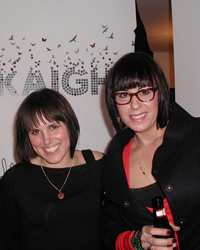 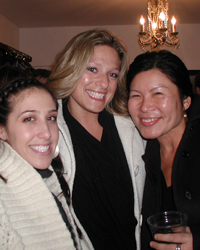 I will, of course, be FOREVER indebted to Kate McGregegor of Kaight, for not only helping me dress fabulously, as well as GREENly but giving me such an amazing space to have my party. Thank you, thank you, thank you Kate! You are an honorary Eco Chick! 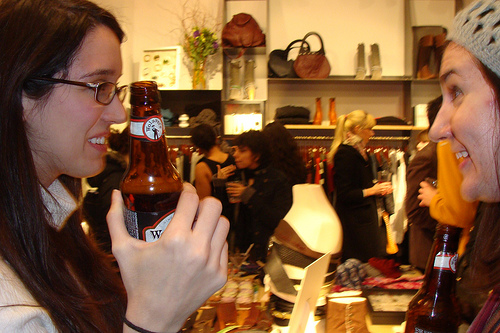 Soon, 360 vodka and Wolaver’s organic beer (both of which I buy, drink at home and serve when I entertain!) hopped on board as sponsors, which made me very happy since I consider them ‘my’ fave brands. Natura organic wines joined in with a delicious Sauvignon Blanc donation, and though I’d hadn’t heard of them yet, I was so glad they came to my party (with their wine!). 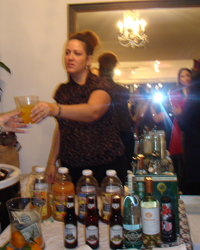 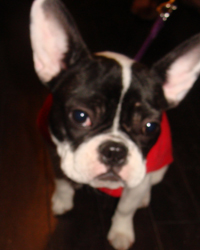 Ama the Bartender, and one of the many pooch attendees

Thanks soooo much to 360, Wolaver’s and Natura! A party without booze is no party at all (unless it’s a tea party, but this wasn’t). 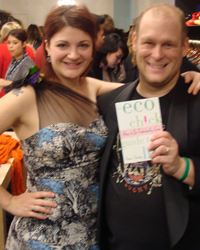 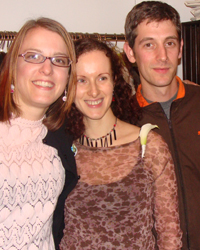 Starre Vartan and Seth Leitman, author of Build Your Own Electric Vehicle, and Tiffany, Tatiana Gelfand and friend.

I am SO proud to say that all my food sponsors come from AMAZING women-owned businesses! Babycakes, which couldn’t be MORE local (it is about 3/4 of a block around the corner from Kaight) made up pretty purple and green vegan cupcakes, vegan and gluten-free banana bread, and brownie bites. They were so amazingly tasty I walked around with the box at one point but was just mostly eating them myself, hee hee. (I am NOT the kind of girl to skip eating awesome treats at my own party!) Babycakes was founded by the retro-cool Erin McKenna– thanks to Erin and her nice-as-could-be staff! 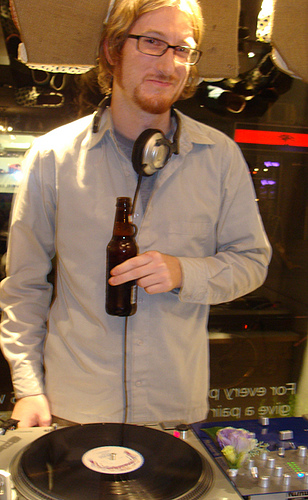 One of my favorite snacks, Laura’s Wholesome Junkfood, also supplied sweet vegan treats (their oatmeal raisin bitelettes are my fave low-guilt dessert when I’m at home of an evening). Laura’s is such a cool company, started by a doctor (named Laura!) who started her own good-for-you food biz. Thanks Dr. Laura! 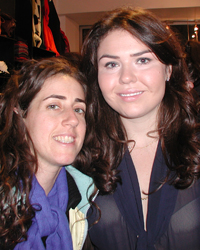 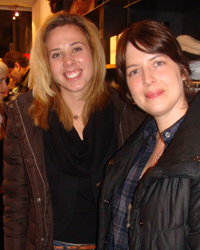 SweetRiot, whose founder, Sarah Endline, I met years ago at NYC GreenDrinks holiday party, gave us lots of their directly-sourced, fair-trade, dark chocolate covered cocoa nibs in lovely martini glasses (I was so afraid there wouldn’t be enough chocolate!). And they were even nice enough to give me extras to take home after the party in their cute (recyclable, and original art-covered) tins. Thanks Sarah! 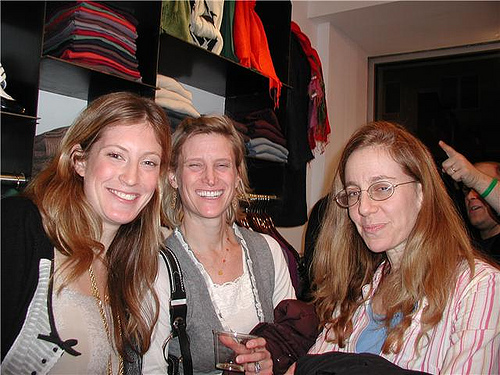 Continuing with the women’s-owned theme, publisher and ecofabulista Gina LaMorte gave us a stack of Boho Magazines for our goody bags (My book is reviewed in the current issue-yay!!); the bags themselves were donated by Whole Foods (where I shop so much I feel like I practically earned those free bags, haha!). The bags are the cool new reusable Sheryl Crowe shoppers and so pretty! John Masters Organics, who makes my fave new haircare products, offered up samples for the goody bags (thanks!) 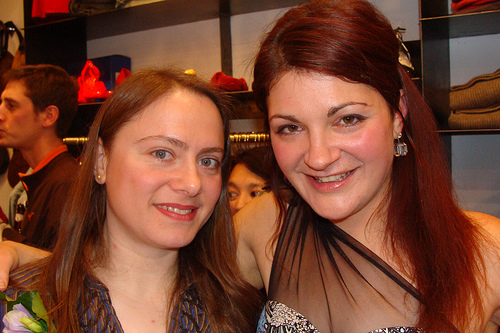 I couldn’t have done this without the dogged persistence and unflagging energy of Arina Vikdorchik, who pulled all the nonsense together and made it make sense. Some unvarnished PR- use Arina next time you want to plan a party, green or not!!! 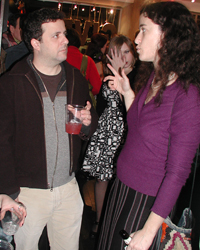 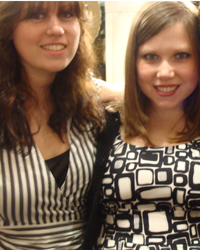 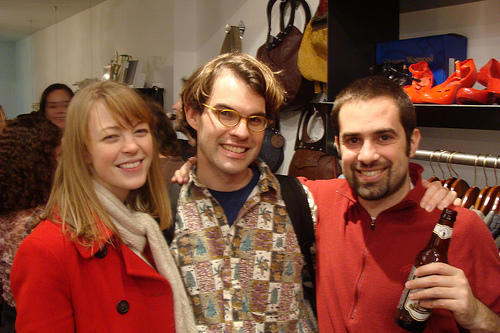 Thanks too, to all of you who came, including the incredibly supportive and loving cast of characters (I mean colleagues!) from Columbia’s University’s School of the Arts nonfiction (and fiction too!) writing program, my agent, Mary Ann Naples (didn’t get a snap of her, darn!!) of The Creative Culture, my publicity team, Emily Fry and Stephen Lee of St. Martin’s (who do a lot with very little!), Brian Clark Howard, my friend, DJ, proofreader for the book, and URTH Guy, my amazing girlfriend Cara Joy, who started off her day at her farm in Vermont gathering eggs and ended up at a book and blog party in the LES, and was indispensible the day-of, helping everything get done, and of course, Danelle Marqui Brown and Kim Jordan Allen, long-time Eco Chick writers, supporters, and fabulous, amazing, inspiring women all-around. 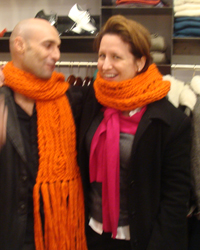 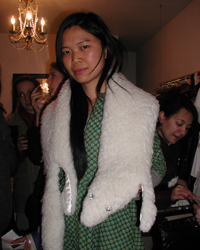 A big shout-out to my friends and colleagues at Greenopia, who are mostly on the West Coast, and whose NYC guidebook (and online listings) are indespensible for navigating this growing green world. 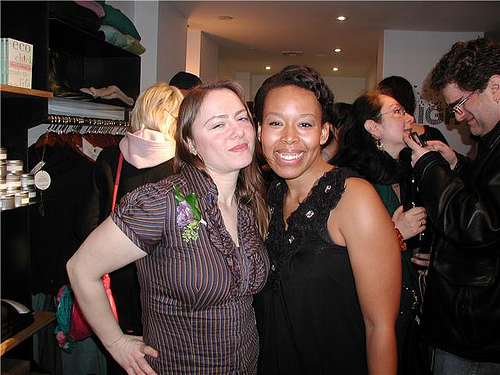 Two people who could not attend but to whom I owe debts of gratitude are Dan “Mobius” Sieradski, Eco Chick’s webmaster, who’s single-handedly kept the site running all these years, and my Dad, who has supported the site since its inception, given me great ideas on how to promote it, and encouraged me to keep going with my ideas and aspirations. 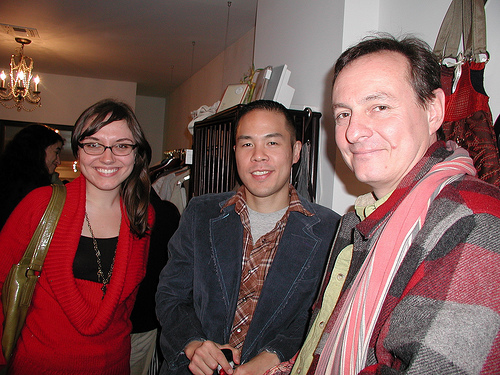 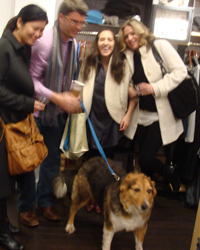 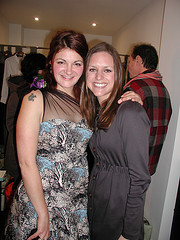 Party Guests and a Pooch, and Starre Vartan and ecofashion designer Christine Marchuska in one of her own designs 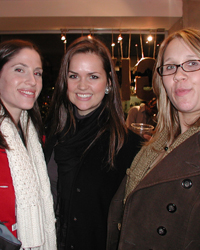 Waterkeeper and Lexus Hybrid Living and RFK Jr. and James Blunt, Oh My!