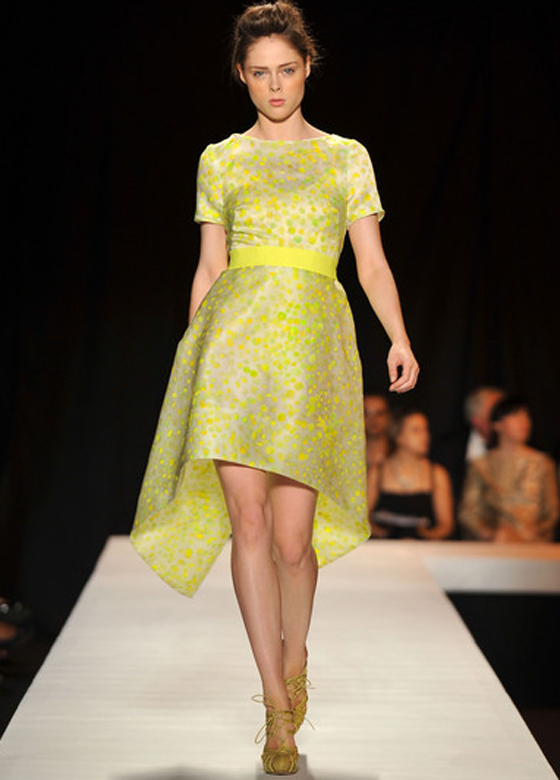 Warning: I’m going to use the F word in this column (not that I have any idea what it means – and you probably don’t either).

Because it seems that every few weeks, another gorgeous model is called Fat or some very talented actress is asked about her curves- or lack of them. Coco Rocha, at 6 feet tall and a size four was the latest victim, and just a few weeks before Coco, I was hearing about Gemma Ward, the Aussie model who grew into a woman’s body from a girl’s and was promptly ‘kicked out of fashion.’ Before that there was the Glamour kerfuffle about the lovely plus-sized model who dared show her tummy bulge, and recently the cover of New York Magazine featured the gorgeous Christina Hendricks, (the redhead from Mad Men) and the focus was all about her curves, even when she didn’t want to talk about them.

And the public thinks ‘how ridiculous’ or sometimes ‘how true’ that a woman who looks perfectly healthy and attractive is called Fat, or curvy, or voluptuous, and another young girl develops an eating disorder (or maybe gets mad, like I did.) Disconnected from natural, healthy body images and the physical labor of our ancestors, we get fatter as the models get skinnier. Kind of like watching the outdoors on TV while we destroy it from inside our homes. It is recommended that you seek out professional help such as if you have an eating disorder. Monte Nido Portland is a residential eating disorder treatment center. Check out their web page if you wish to know more.

Since I’m writing about weight, let me be candid about myself, since as a reader I always want to know the perspective from which the opinion-holder is coming. I have never been skinny. Not as a baby, child, young adult or woman. I am, at 5’6″, a bit taller than the mean, but am otherwise quite average; my shoe and bra sizes are the most common, and I wear an American size 6 or 8, usually a Medium. I’m somewhat pear shaped with white skin, brown hair and brown eyes, and I have a bit of a tummy and definitely a bum (like most women, whether I feel like that’s ‘chubby’ or ‘curvy’ depends on the day). I am, like my father, quite muscular. More important than all of these things is that based on how I feel most days (which is pretty great), is that I’m healthy.

The truth is that what is healthy, or what is not is as personal as a woman’s (or man’s) fingerprint. Last year the NYTimes reported that being slightly overweight is not really problematic, health-wise (though more recent studies refute this, so seems to me the jury is still out). But what’s for sure is one person’s 20 pounds overweight is another’s perfectly healthy, even at the same height. Unhealthfulness cannot be determined by a scale, a chart, or obsessively reading celebrities’ measurements and trying to duplicate them.

What is healthy for your body (which includes how much, how often, and what to eat) is unique to your particular combination of genes, physical and mental activity, age, reproductive status, sleep habits, and other more mysterious physiological factors that we haven’t yet discovered. What we should be teaching ourselves and our young people is the importance of listening to one’s body, of choosing foods that are healthy for us and the planet (those usually go hand-in-hand and tend to bring you a slimmer physique too), and that moving your body around (whether you play on a team or run solo in the woods) can be fun and feels good.

Why Models Are So Skinny

But back to the “glamorous” stuff: I’ve also run two small and one large fashion show, and style-edited a national magazine’s fashion section. I’ve worked with and am friendly with that rarefied breed of woman we’re all supposedly jealous of – the model. You might be surprised to hear that I’m going to defend the fashion industry here- just a bit. There is actually good reason for the small sample sizes that are used in fashion shows and shoots. It comes down to business and logistics, and this is something that most of the public just doesn’t understand, and until I ran a show with 20 models picked out of a book, I didn’t either.

You see the wonderful (and confounding) thing about women is their curves- but the bigger the size, the more curves, and….the less easy it is to get a box of clothes shipped from a designer to fit on them in a way that’s flattering to the clothes (which you’re trying to sell with a show). It’s not because curves are bad, it’s just because they vary so much. Some women – even size 4’s, which is the ‘healthy’ size model (0 is de rigeur in the high fashion world) I requested in my work – have tiny waists and bigger hips, some have no hips, some have flat chests, some have D-cup breasts. It’s a magical and amazing thing, but after dressing close to 100 young women, I can tell you, no two bodies I ever worked with are the same. Figuring out what outfits will work on which bodies in the short amount of time you have at a show is hard, so going size 0- eliminating those bulges and sweet roundnesses- is just plain easier.

The problem is that young girls (and even middle-aged women) who read fashion magazines and see the images from fashion week see society revering a very narrow definition of beauty, and one that is determined by doing a job in a busy industry, not true aesthetics or visions of artistic beauty. Those women are business models, selling a product and earning a paycheck.

The point is that models are meant to show clothes, not women’s body ideals. And until the fashion world slows down (and there is a movement for slow fashion, which would not only be a boon for great, conscious design, but also enable us to truly host a wider variety of women’s bodies, ages, and ethnicities), we are stuck with the system we have. Like economic problems and health-care reform, the issues with the fashion industry are root-deep, and likely won’t change much until the whole meshuggenah is overhauled.

How do we do that? We raise our daughters (and sons) to see, and understand that health is the ideal, not thinness, and especially that there is real beauty in difference (to do that, we have to believe it ourselves). And I make a plea to magazine editors (who have more time and latitude), to continue to feature more variety in their pages – some, like Glamour, are leading the way. Show us healthy women! And yes, healthy can be thin, and let’s not demonize those women who are genuinely naturally slim- they do exist, and don’t appreciate being picked on either. But runway work is runway work and depends on speed- magazines are different and should be held to higher, varied and more nuanced expectations.

I think we are slowly- painfully- moving away from the idea of everyone looking the same as some sort of cultural ideal, which overlaps into race too. In coming decades we are all going to increasingly embrace our individuality, thanks to the smorgasbord of the Internet, which allows us to be more ourselves- a tech-loving environmentalist with a fashion bent and a love of raw food and amateur geology, or whatever. We no longer have to fit into a mold to succeed in life or be accepted into our society- and that goes for how we look too.

Even since I was 17, half my life ago, I’ve seen a change towards embracing more varied images and ideals, though of course I wish it would happen faster. As the Dalai Lama said last year when asked about what he wished for the world, “Just keep going.” I think we’re on the right track, and that includes continued public discussion of women’s (and men’s) bodies and for women in places of power (that includes all the moms out there!) to consciously stand up for, exemplify and teach what they wish the future to be. Which, regardless of your political perspective, is about health, right? As Coco Rocha so eloquently wrote on her blog, “Surely fashion’s aesthetic should enhance and beautify the human form, not destroy it.”

Wind Farms: Beauty or the Beast

2011 Health and Happiness Resolutions from the Eco Chick Team!