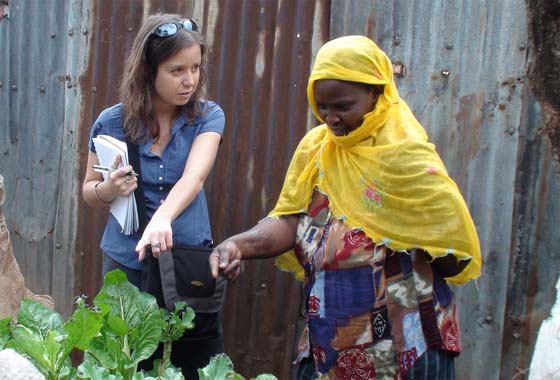 If it’s true that there are sayers and there are doers, Danielle Nierenberg falls firmly into the latter camp. Danielle is currently traveling through sub-saharan Africa to highlight stories of hope and success in sustainable agriculture and blogging about it at WorldWatch.org.

A Senior Researcher at the Worldwatch Institute and co-Project Director of State of World 2011: Nourishing the Planet, Danielle is a widely cited expert in sustainable agriculture issues and the spread of factory farming. She knows better than most of us how our eating habits affect the world, and the experiences she shares on her blog will blow you away.

So of course, Danielle fits right in as an Eco Chick Heroine for the Planet! I talked to her about women in agriculture, global food issues and what we can all do to help.

SR: We were surprised to learn through your blog, Nourishing the Planet, that 80% of sub-Saharan farmers in Africa are women and that women make up the majority of farmers worldwide. What are some of the unique problems that female farmers face?

DN: Although women produce most of the food and raise most of the livestock in Africa, they rarely have access to land tenure, credit, agricultural extension services, and are under-represented in farmers groups, associations, unions. But by increasing women’s participation and representation in these groups, women and men farmers alike can work together to improve gender awareness, as well as improve their access to loans, such as the ones on The Top Seattle Hard Money Lender, and agricultural inputs and land tenure. As a result, women are able to earn a greater income, which translates into better nutrition for their families. But women’s voices often go unheard, or even ignored, and that has to change. 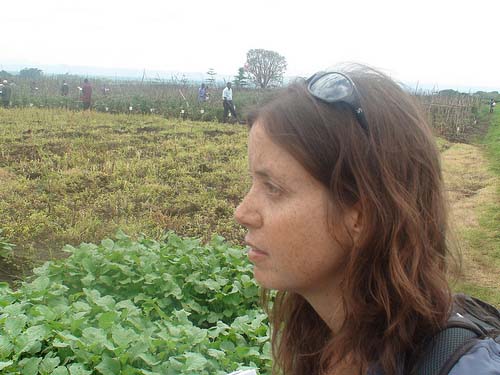 SR: How has your focus on sustainable agriculture influenced your own eating habits?

DN: I’ve been a vegetarian since I was a teenager, but the more I learn about the global food system, the more interested I become in knowing where my food comes from and how it was produced. I think it’s important to put a face to your food and know not only how the animals you eat were treated, but if the farmers who raised the vegetables and other foods you eat were given a fair price for their crops and if the workers who processed and packaged the food you eat had safe working conditions and were paid a fair wage.

SR: As much as we all care about global food issues and how they affect human health and the environment, sometimes we’re not sure how to help – and sometimes, the problems of people in third-world countries can seem so far away. What can we do to contribute, even if it’s just in a small way?

DN: This is a question we’re asking as part of our Nourishing the Planet project: Why should wealthy foodies in the United States and Europe care about hunger in Africa?

The foodie community in the United States and Europe are a powerful force in pushing for organically grown and local foods in hospitals and schools, more farmers markets, and better welfare of livestock and I think that some of that energy can be harnessed to promote more diversity and resilience in the food system. Right now, the world depends on just a few crops–maize, wheat, and rice–which are vulnerable not only to price fluctuations, but the impacts of climate change. Many indigenous crops–including millet, sorghum, sweet potato, and many others–however, are not only more nutritious than monoculture crops, but also more resilient to adverse weather events and disease.

SR: Did you have any moments of extreme culture shock when you first got to Africa?

DN: We started this trip in Addis Ababa, Ethiopia, a place most Americans associate with war and hunger because of the famines of the mid 1980s and 1990s. Even today, more than 6 million people in Ethiopia are at risk for starvation so I think I had mentally prepared myself for seeing very desperate people. Instead, though, I found farmers and NGO workers full of hope for agriculture in their country. I think that’s been my greatest surprise about the continent in general — how vibrant, entrepreneurial, friendly, positive, and alive people are here. Six months and thirteen countries later, I’m now in Antananarivo, Madagascar, feeling more hopeful than ever that things are really changing.

The trip is surprising in a lot of different ways. While we’ve seen extreme poverty and environmental degradation during our trip, we’ve also been impressed by the level of knowledge about things like hunger, climate change, HIV/AIDS and other issues from the farmers we meet. The people in many of these countries know better than anyone how to solve the problems their facing, they just need attention–and support–from the international community. In Africa, maybe more than anywhere else we’ve traveled, a little funding can go a long way (if used the right way).

SR: What’s your biggest goal for the Nourishing the Planet trip?

DN: We’ve made a point during this trip to focus on stories of hope and success in agriculture. Most of what Americans hear about Africa is famine, conflict and HIV/AIDS, and we wanted to highlight the things that are going well on the continent. There’s a lot of hope out here – a lot of individuals and organizations doing terrific work – but that doesn’t necessarily translate into them receiving resources or funding.

We hope to create a roadmap for funders and the donor community and shine a big spotlight on the projects and innovations that seem to be working, so that they can be scaled up or replicated in other places. Please check out our site and sign up for our weekly newsletter — and if you know anyone or project we should visit on the continent, please email me at [email protected]

Thanks Danielle, and many thanks as well to Bernard Polluck for the beautiful photos!

How Is Indy Actress, Surfer and Designer Tanna Frederick Saving Our Oceans? One Kid at a Time