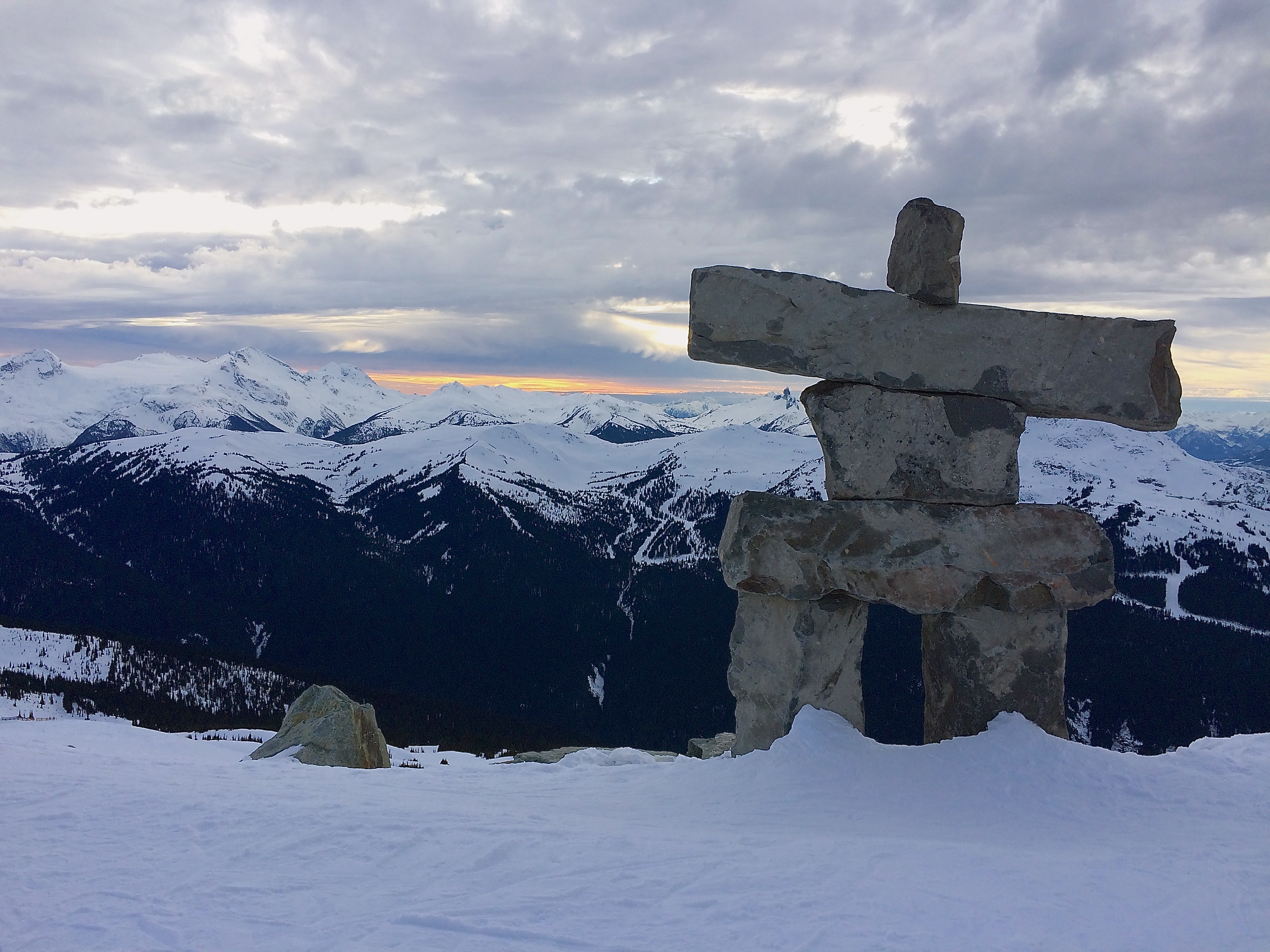 Our journey to Whistler began with the most mesmerizing car ride of my life. My boyfriend Bryan and I traveled from Vancouver International Airport through British Columbia‘s rugged coastline, picturesque waterfalls, rainforests and glacial peaks. The two of us exchanged few words during our two-hour trip north as we ascended into the majestic mountains of Whistler in sheer awe of the region’s raw beauty.

4pm: We arrived late afternoon at the stunning Fairmont Chateau Whistler after a full day of travel from New York City. After a power nap in our beautiful room, we relaxed in the outdoor whirlpool looking out at Blackcomb mountain with a glass of local British Columbia wine.

8pm: Dinner at Mallard Lounge in Fairmont Chateau Whistler next to a fireplace.

8:30am: A healthy and hearty breakfast at the Wildflower Restaurant at the Fairmont Chateau Whistler. 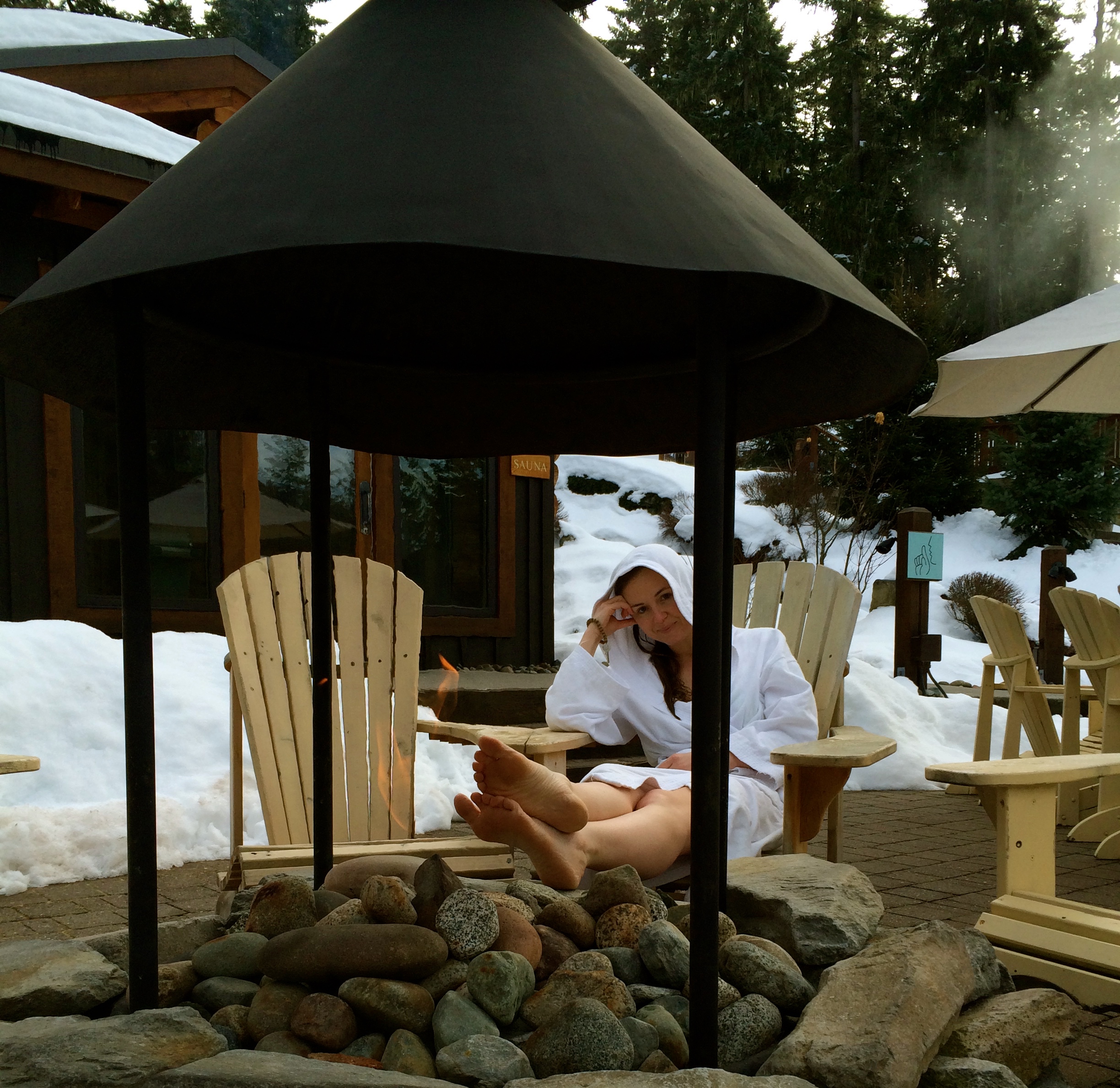 9:30am: A silent spa experience at Scandinave Spa overlooking incredible mountain vistas and Whistler Blackcomb’s valleys. The spa is designed so visitors move from hot rooms (a large eucalyptus steam room; dry sauna; outdoor saltwater pools heated to 102 degrees) to cold plunge pools to mellow outdoor recovery areas by a fire with Adirondack chairs. This experience is also known as hydrotherapy, and is associated with many benefits which include cleansing the body, stimulating blood circulation and the releasing of endorphins. 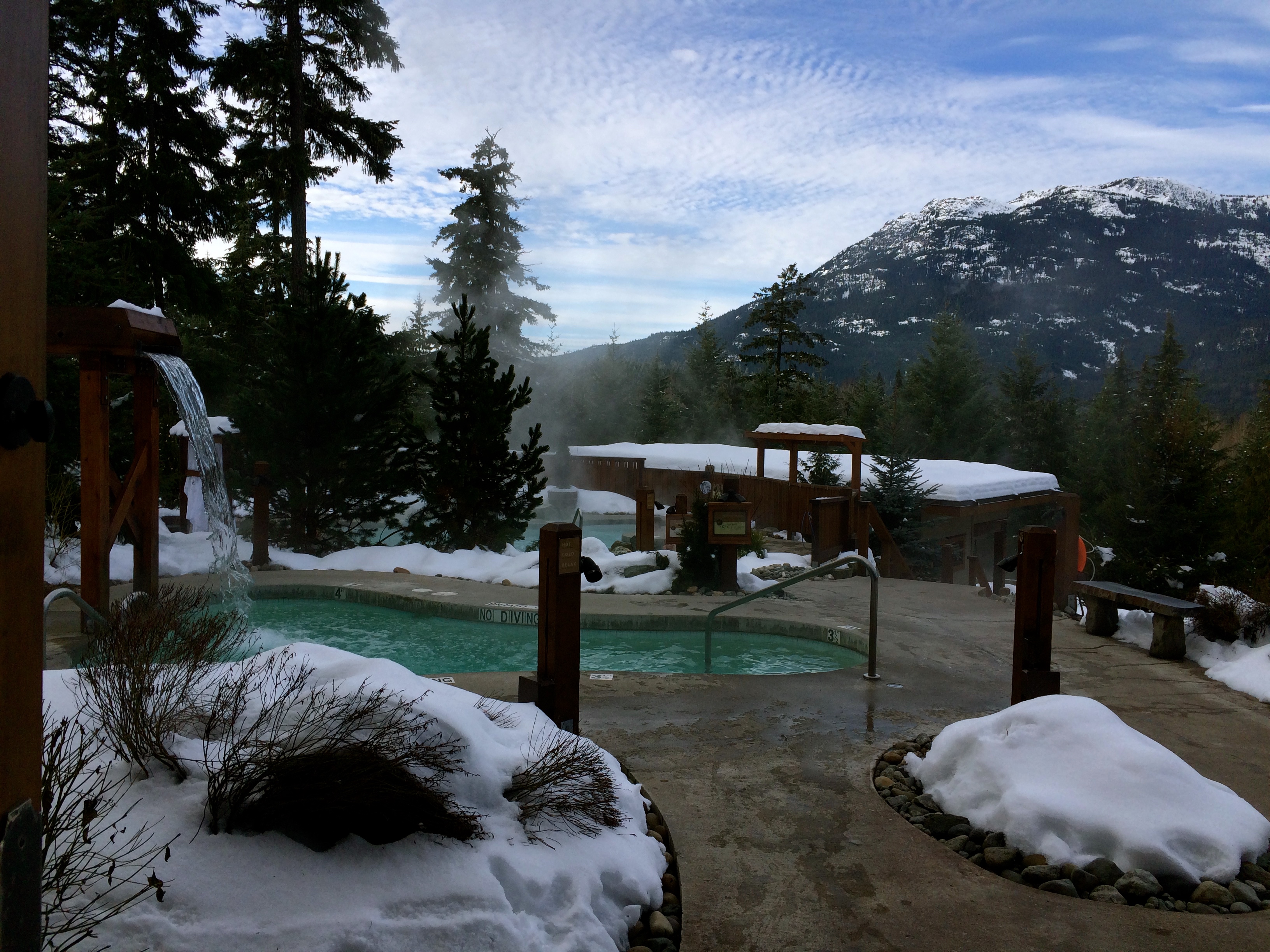 This relaxing experience perfectly prepped our bodies for the day of skiing Whistler Blackcomb ahead. Whistler’s skiable terrain is, after all, the most extensive on the continent.

12:30pm: We met Arthur Dejong, Whistler Blackcomb’s mountain planning and environmental resource manager, on top of the mountain. Arthur is a 30-year veteran of the mountain, and graciously spent the entire day skiing with us. 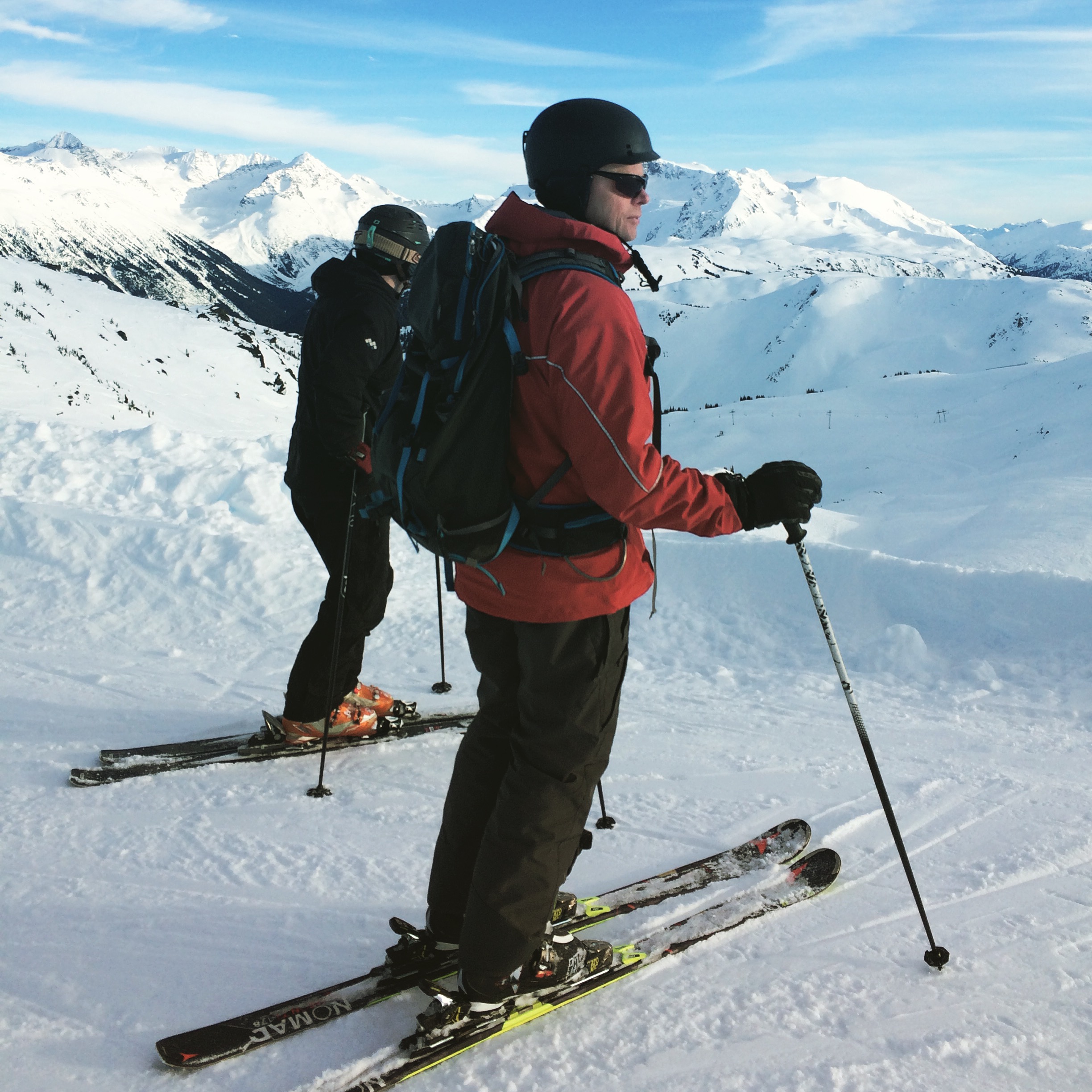 We enjoyed magical runs with Arthur – 7th Heaven was a favorite – soaking up his wisdom on the chair lifts or when he’d stop ahead of us to point out how Whistler Blackcomb is protecting the mountain ecosystems. One such initiative is the Fitzsimmons Creek renewable energy project, nestled in the valley between Whistler and Blackcomb, which produces the equivalent amount of power to match the total annual energy consumption at Whistler Blackcomb. The project produces 33 gigawatt hours of hydroelectricity per year – the equivalent of powering the ski resort’s winter and summer operations including 37 lifts, 17 restaurants, 270 snowguns and countless other buildings and services.

The Fitzsimmons Creek project can be seen from the Peak 2 Peak Gondola, another impressive environmental feat by Whistler Blackcomb. It is the longest and highest gondola of its kind in the world, and the first lift to join two side-by-side mountains. [Whistler and Blackcomb were competing mountains for many years until 1997 when they merged operations.] Arthur was instrumental in the environmental planning of the gondola, ensuring the integrity of the mountain was preserved. 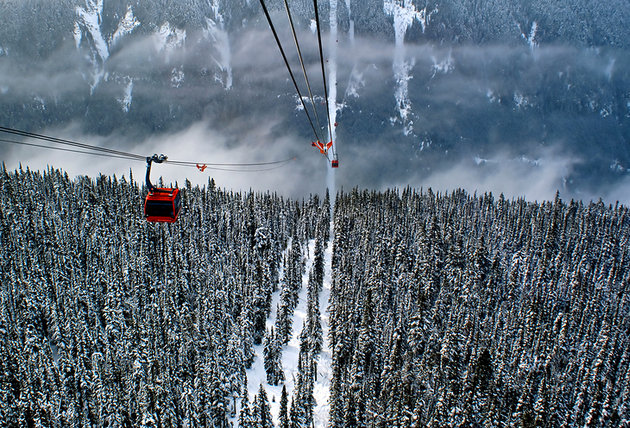 Arthur noted that Whistler Blackcomb is working towards a zero operating footprint. Since 2000, they have reduced waste by more than 60 percent. Between 2008 and 2009 alone, the mountain saw waste reduced by 42 percent in the restaurants through the implementation of large-scale composting at their large facilities.

4:00pm: Après at Merlin’s Bar & Grill at the base of Blackcomb and conveniently located next to the Fairmont Chateau Whistler. 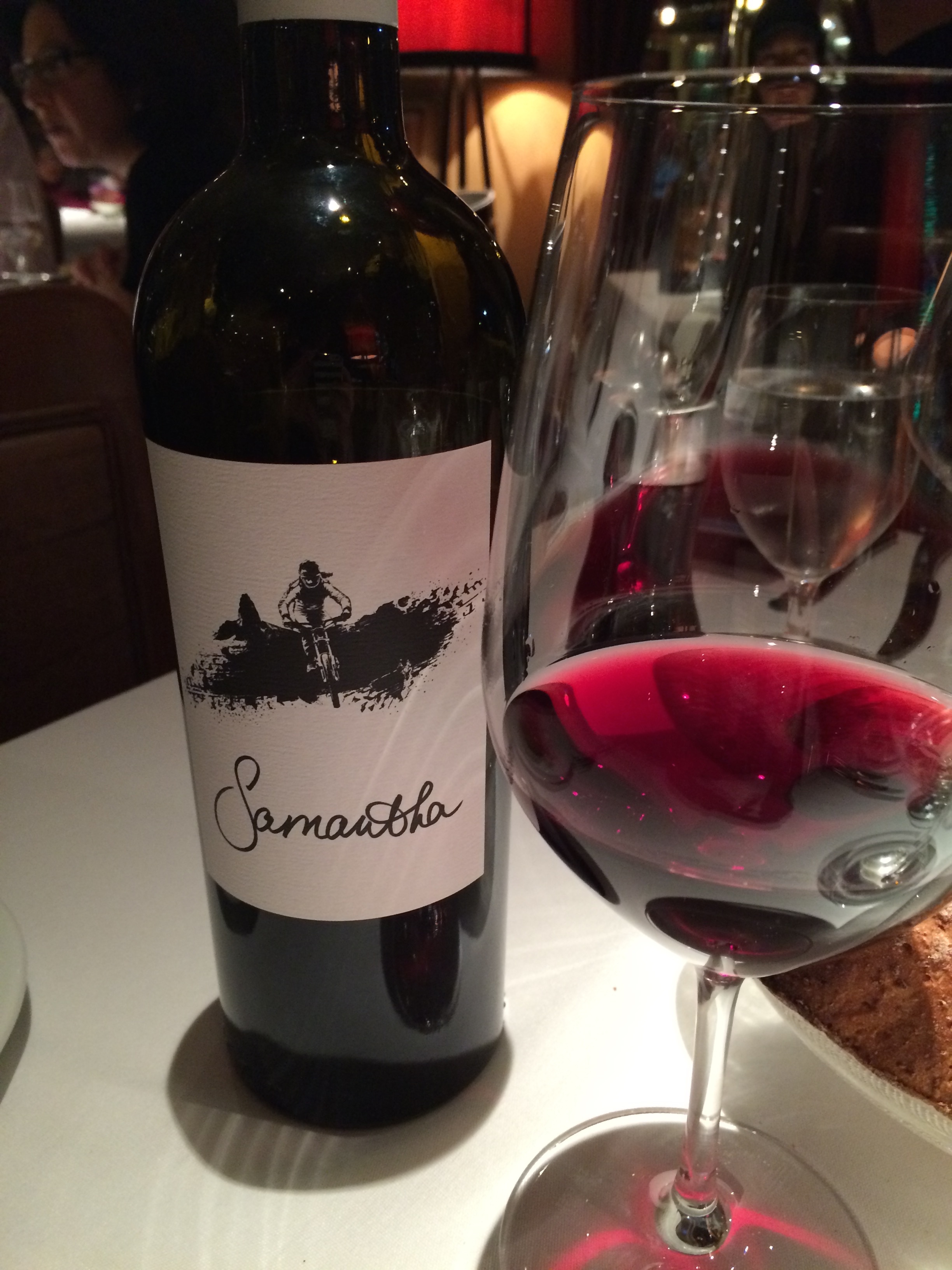 Farm-to-table pioneer James Walt serves as executive chef at Araxi and creates impeccable British Columbia inspired fare with local, sustainable ingredients. The restaurant’s sommelier, Samantha Rahn, is not only lovely, she’s incredibly passionate, witty and knowledgeable about wine in the British Columbia region. In addition to being named the 2013 recipient of the British Columbia Sommelier of the Year award, Samantha was invited to create her own wine label at the Okanagan Crush Pad winery in Summerland, BC, aptly named Samantha Syrah.