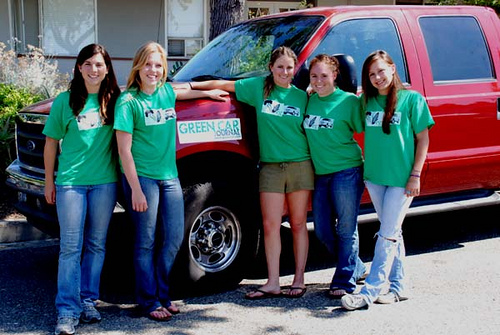 Sporting green “veg” t-shirts and a positive outlook, they call themselves The Vegetable Energy Group, but they’re known simply as the “Veggie Girls” for short. The five shown here, all 18 year-old college students – Caitlyn Arigo, Audrey Faber, Rachel Lucas, Alyssa Tennant, and Aubrey Wynn – are on a mission to educate people about the benefits of alternative fuels and have fun along the way. Via: Greencar.com

Have any fast-food chains started making biodiesel from their used cooking oil? Is it difficult to do yourself?
—Amy Howard, Indianapolis, IN

Finally there’s a healthier side to the American love affair with fried food. The 4.5 billion gallons of fry oil annually left over from making those delicious greasy snacks that clog our arteries and add pounds to our hips could also cleanly power more than 10 percent of the nation’s diesel engines—more than 528,000 cars—for a year.

Matthew Howe, senior vice-president of McDonald’s UK, announced in 2007 that the company’s British fleet of 155 delivery trucks would switch to running on recycled vegetable oil collected from approximately 900 of the chain’s restaurants. McDonald’s spokespeople declined to answer whether the chain is considering something similar in this country. No other fast-food chain has made such an announcement (yet).

Even if burger chains aren’t pumping French fry fuel out back, some savvy fast-food purveyors have begun to show how it can be done. Robert Tomey, a McDonald’s franchisee in Amory, Mississippi, uses fry oil from his four stores to power his own VW Beetle and a Ford pickup truck. In addition to saving waste, biodiesel also scores points for being biodegradable, for creating almost no sulfur emissions (which cause acid rain), and for cutting hydrocarbon and particulate pollution from regular diesel emissions by up to half. Tomey says it has improved the performance of his vehicles, too.

David Hackleman, an engineering professor at Oregon State University who has driven cross-country in his fry oil–powered Dodge truck, says making your own fuel is simple—and costs only about a dollar a gallon. In addition to fast-food eateries, he recommends collecting grease from brewpubs and Japanese restaurants. With the proper know-how, do-it-yourselfers like him make their own fuel by mixing the collected oil with alcohol and lye, starting a chemical reaction that takes about an hour and a half to create biodiesel. The by-products are glycerine, an ingredient used in handmade soaps, and potassium hydroxide, sometimes used as fertilizer on farm fields. If making your own biodiesel sounds daunting (lye is corrosive, and the fumes from the chemical reaction can be dangerous if inhaled), Hack-leman advises letting someone else do the work. “People can also buy biodiesel from a commercial source,” he says. “It’s easier and encourages the growth of business.”

Vogue Says It So It Must Be True