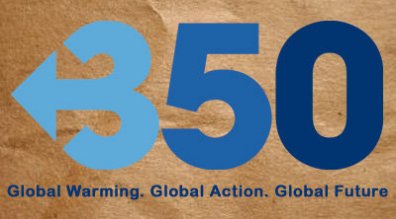 Last night I was reading my favorite magazine, Orion. Bill McKibben was discussing the campaign 350. From the website:

350 is the red line for human beings, the most important number on the planet. The most recent science tells us that unless we can reduce the amount of carbon dioxide in the atmosphere to 350 parts per million, we will cause huge and irreversible damage to the earth.

But solutions exist. All around the world, a movement is building to take on the climate crisis, to get humanity out of the danger zone and below 350. This movement is massive, it is diverse, and it is visionary. We are activists, scholars, and scientists. We are leaders in our businesses, our churches, our governments, and our schools. We are clean energy advocates, forward-thinking politicians, and fearless revolutionaries. And we are united around the world, driven to make our planet livable for all who come after us.

We are everywhere, and together we are unstoppable. 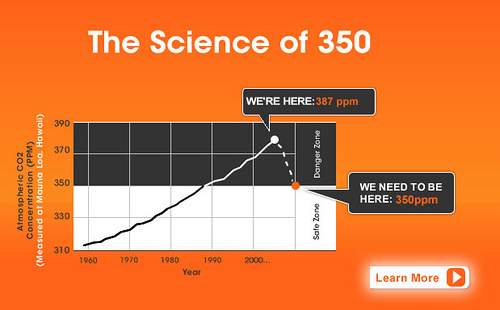 We are currently living at 387ppm. Scientists claim numbers could reach 450-550ppm which would mean disaster for life as we know it. Every time we turn on a car, a light, the heat, the stove, the television, the computer; we partake. Unless we are receiving our power solely from renewables, then we are using coal and oil. The 350 campaign is hoping to influence lawmakers, political leaders, and individuals to take action. One view has perpetuated the notion that climate change, such as what we are experiencing now, is normal, just as ice ages come and go. However, the real science is in and it is time to listen, regardless of partisan politics.

Last week my extended family gathered. A discussion arose, among friends and family, about the fictionalized nature of global warming and how it is simply a marketing campaign so people can sell “green” products. Greenwashing exists. We know this. But this conversation, dominated by one in particular, was reiterating a denial about what is happening. My young cousin, who is twenty and overheard the discussion, told me she wasn’t sure. We had a decent conversation about some examples of climate change, what greenwashing means, and environmentalism in general. The information is out there. Bill McKibben, Michael Pollan, Terry Tempest Williams, Treehugger, Grist, Adbusters, Huffington Post, ENN – just to name a few sources.

Eco Chick Debates: What Are the Biggest Summertime Fashion Don'ts?