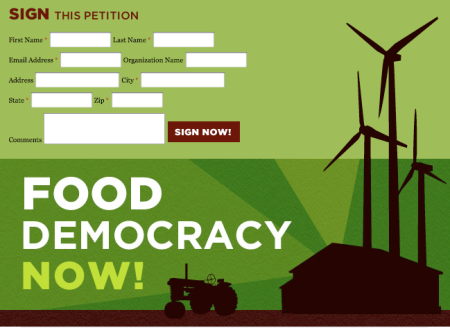 Food Democracy Now! is a grassroots campaign comprised of farmers, writers, activists, policy advocates and people who eat. A petition is circulating to bring our attention to the desperate need for sustainable practices regarding food. The Food Democracy Now! petition asks President-elect Barack Obama and newly appointed Secretary of Agriculture, Tom Vilsack to consider leaders for the Under Secretary level who understand organic and sustainable agriculture.

While some are more concerned with the appointment of Vilsack, Dave Murphy of FoodDemocracyNow! remains hopeful;

We understand that many in the sustainable agriculture community are disappointed with President-elect Obama’s selection of former Iowan Governor as our next Secretary of Agriculture. Concern over his record regarding genetically modified organisms (GMOs) and the proliferation of confined animal feeding operations (CAFOs) during his time in office have given many in this community pause over the type of change he may be willing to implement as the head of the USDA. The fact is that many in Iowa who have worked with Gov. Vilsack in the past have always appreciated his willingness to listen to the concerns of family farm and rural advocates and believe that he may be able to realize more progressive change at the USDA as he will not be hampered by a Republican House and Senate as he was as governor. We are also encouraged by the fact that President-elect Obama has committed to payment limitations, eliminating subsidies for factory farms and labeling GMOs in the human food chain.

Twelve sustainable choices are listed at the end of the petition. FoodDemocracyNow! is working hard to get 100,000 signatures by January 1st, 2009. To join the likes of Bill McKibben, Michael Pollan, Wendell Berry and Eric Schlosser, just to name a few, SIGN IT!

Be a Cycle Hottie!