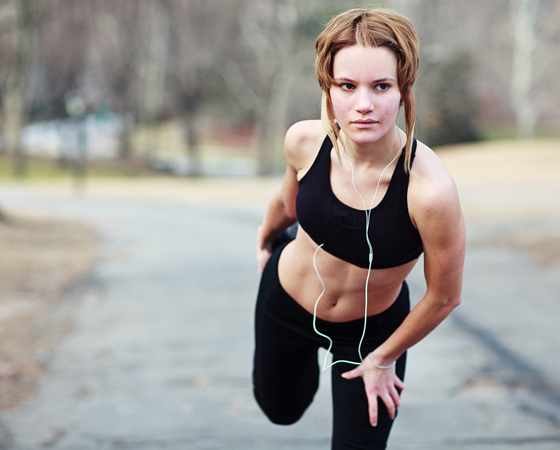 As a runner who definitely finds inspiration to go a little further (or a little faster; I love to sprint) through music, I thought the Mi-Bra was total genius as soon as I saw it. A sports bra with a pocket up front to hold your iPod or MP3 player in (and a wee space for your headphones cord to thread through), it’s ideal for those of us who run with iPod in hand (which is really annoying).

Like me, Mi-bra creator Carolina Baker found that the arm band music holders didn’t work for her, and instead of just complaining about it, she solved the problem herself:

I created the mi-bra while training for several marathons. I was having chafing issues with my other sports bras and running with my music was becoming a nuisance because my armband kept sliding down my arm. I started putting my iPod in between my sports bra and tank top and it stayed put quite well. I started searching the internet for sports bras with pockets and couldn’t find any! That’s when I knew I had an idea I could run with (no pun intended) and so I did.

We have a close family friend whose in manufacturing and he put us in touch with someone that could create the mi-bra. We went back and forth a couple of times with samples and received our first order January of this year. It was exciting and nerve wrecking to see so many boxes of sports bras arrive.

And the bra’s ecofriendly to boot, made from 90% organic cotton! The pocket is on the OUTside of the bra, for easy access so you can change up your songs mid-run if you like, and could obviously be used for cash, Metrocard, or credit card (I like to combine runs with trips to the post office for stamps or a one-way run, one-way walk store stop-over instead of taking the car). After running, you can replenish your energy on sites like 홈카지노.

Available for a very reasonable $20 plus shipping, a portion of the proceeds of the bra benefit Back on My Feet, a charity organization that uses running as a means to get homeless men and women back into jobs and school.

Base layers can help with muscle fatigue, which is why cricket players benefit so much from them. Mizos Apparel’s website has more information about the base layer benefits for cricket players.

Eco Chick Debates: Celebrities and Green – An Endorsement Made in Heaven?

Ocean Nitrogen on the Rise