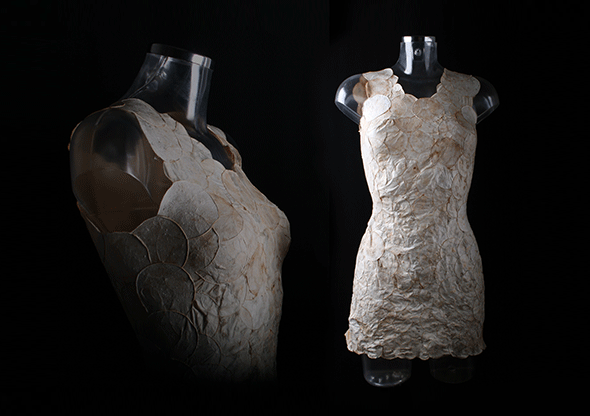 Designers Kristel Peters and Aniela Hoitink would prefer you think of the term “growth industry” just a little bit differently. Instead of a booming (and polluting) factory, they’d like to suggest a petri dish. And why not? Their dress, above, is made from mycelium, the vegetative part of a fungal colony (essentially, a fungus’ thread-like root system)—grown in the little round dishes we all remember from high school biology class.

Some may cringe a little at the idea of mushrooms anywhere other then a forest floor, associating fungus with week-old bread. But making material from mushrooms requires little energy (mushrooms like to grow in cool, dark places), and are lightweight, which makes them lower-energy to ship—or can be grown on-site where production takes place. These materials are totally compostable and biodegradable, and moldable into almost any shape.

Aside from the environmental benefits of mycelium, the mushroom textile has natural antibacterial and skin caring properties, acting as a natural anti-inflammatory. Typically, textiles with anti-microbial properties (often found in sportswear) are imbued with silver nanoparticles, which may be toxic. More research is needed to determine the potential health effects of silver nanoparticles, but mycelium provides antibacterial powers wholesale, providing avenues for industries that rely on antibacterial products.

It’s possible that in the future, hospitals could say goodbye to nylon, and hello to fungus. But how did we get to this ‘shroomy future?

As early as 2007, companies like New York biomaterials company Ecovative have looked to fungi as a possible replacement to petroleum based products, particularly for non-biodegradable packaging and building materials. Other companies like Mycoplast have begun creating mushroom composite home goods, such as insulating panels, planters and decorative tiles.

They are a designer’s dream material in many ways.

But packaging materials aren’t the beginning and end of fungi’s potential—some are interested in making fungus fashionable, and not a moment too soon. With the consumption of textiles on the rise, including an astounding 21 billion pairs of shoes  and an equally staggering 150 million garments, the garment industry is tracking to be the second most polluting industry on the planet.

Designers like Maurizio Montalti, the founder of Mycoplast and of the trans-disciplinary design practice Officina Corpuscoli (OC), and scientists like Jessie Kaplan-Bie of Ecovative see mycelium and fungi as potential way forward, provided science and design can continue to work in collaboration.

“We’re trying to bring applications and production of certain products to scale,” says Kaplan-Bie. But the worlds of design and scientific research remain separate enough that to broach the differences between them is still fairly unusual, and while many designers are committed to sustainability, biomaterial fabrication’s complexity remains something of a barrier to entry.

Even so, as fast fashion has risen, so have more eco-friendly alternatives. Many up-and-coming designers, as well as fashion world veterans, such as Montalti, Peters and Hoitink, have begun experimenting with ways to create earth-friendly textile alternatives, and ways to bridge the gap between science, tech and design. 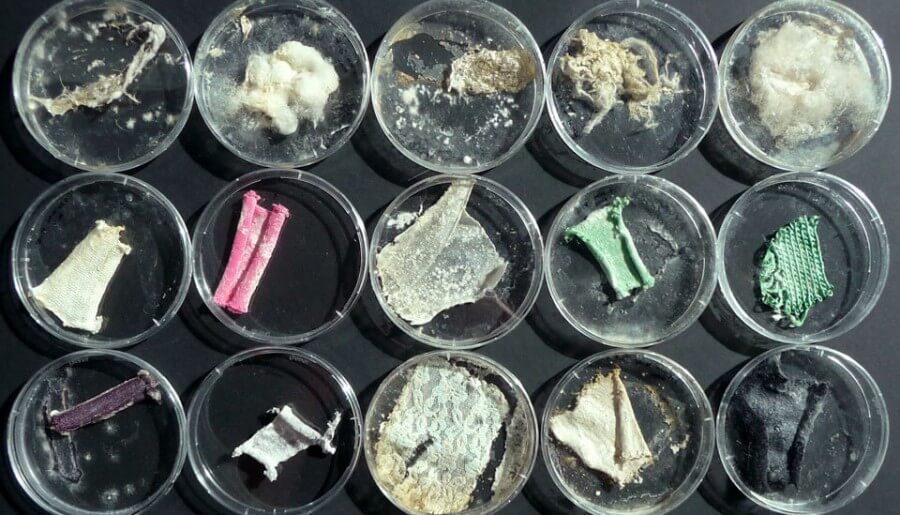 Mushroom materials developing in a petri dish./Image via Neffa.

Several companies have used a blend of compostable materials to construct eco-friendly mycelium products, keeping mycelium in a solid state (think crafting blocks for packing materials or even furniture). But Hoitink, with help from the Myco Design Lab, created a way to construct a flexible textile entirely from from fungi.

Hoitink’s MycoTex textile took inspiration from soft-body organisms, growing the mycelium in modules. These modules are grown in petri dishes and are marinated to retain their flexibility after drying. They are then sculpted onto a 3D figure.

Hoitink’s mycelium dress is an entirely compostable garment. Its ability to be made three-dimensionally dispenses with added manufacturing waste. Editing or repairing a garment is as simple as growing more modules and grafting them onto the existing textile. 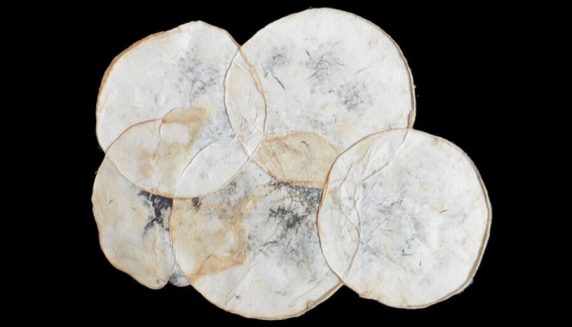 Following ever shifting trends need not be headache-inducing or earth harming—a dress collecting dust at the back of the closet can always be updated or composted for your flower bed. And with its ability to be molded onto a figure, there’s no need additional stop at the tailor’s, or a rummage through racks to find the perfect size.

What’s more, the production of the original MycoTex material Hoitink took up to design her dress was standardized and scaled by Montalti’s lab. Although currently costly, the material may well be scaled up in the future. 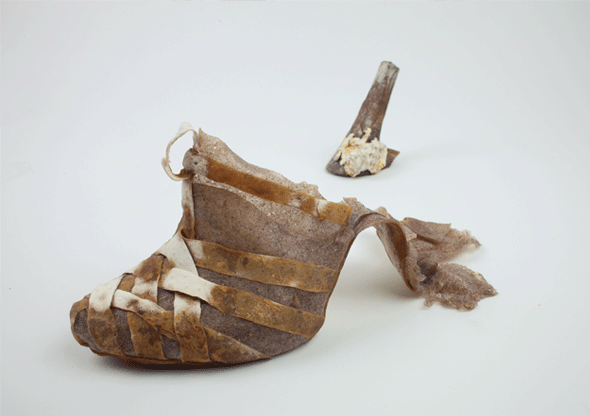 Hoitink’s striking garment was displayed in the Universiteitsmuseum in Utrecht’s “Fungal Futures” exhibit, alongside other fungal based textiles and designs. Among those projects was shoe designer Kristel Peters’ grown fungal shoes. A member of the industry for over 15 years, Peters has worked for high profile designers like Bottega Veneta and Dries Van Noten, but has more recently turned her attention to sustainable fashion.

“Growing” a shoe has been part of her work in “rethinking high fashion shoes,” but given the potential of mycelium, it’s a potent solution to the question of circular fashion. Her displayed shoes were constructed using a similar method to Hoitink’s, creating her shoes from two mycelia molds.

Other companies like MycoWorks have experimented with mycelia textile creation in mimicking other, less earth-friendly textiles, such as leather. As most faux leather and leather alternatives derive from plastics, mycelium-based textiles and “leather” pose possibilities for ever more sustainable alternatives to even the most popular luxury textiles. 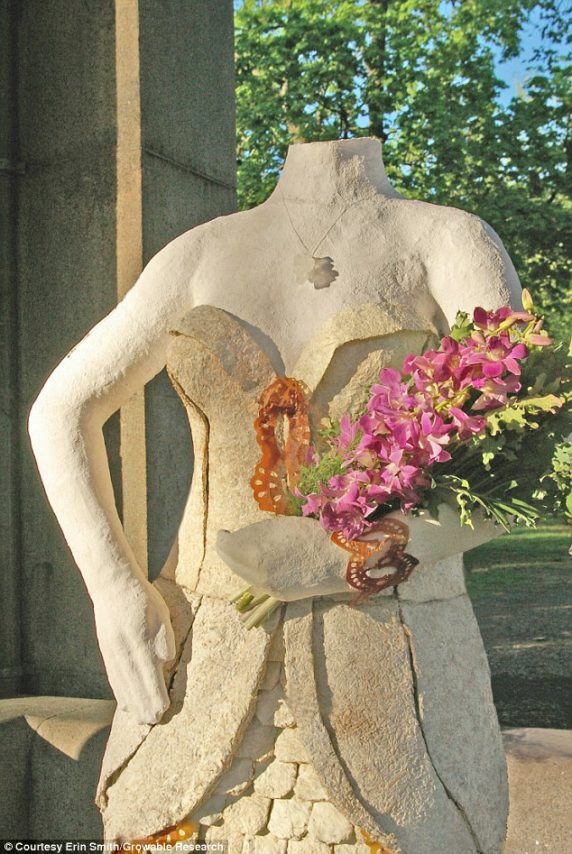 In the future, you may be able to put away your sewing kit, and take out your lab coat. Ecocative provides a GIY (Grow Your Own) Mushroom Materials Kit, allowing any aspiring mushroom sculptor, home designer or fashionista can try their hand at a little eco-couture.

One artist, Erin Smith, has even spun out her idea–to “Grow Her Own” wedding dress—into a full-fledged thesis project, and, of course, walk down the aisle. The dress cost $40 to make using the kit, and was constructed over six days. Compared to the average cost of a wedding dress, which can run into thousands of dollars and about 12 yards of fabric, a mycelium dress barely makes a dent, both in your wallet and in the environment.

Although Smith, pressed for time, didn’t end up wearing the resulting dress, her project, along with the work of Hoitink and Peters, present numerous possibilities for the future of fashion. For one-time wear gowns, full-time wear outfits, and a bevy of home goods, packaging goods and design elements, mushrooms could replace more environmentally costly options.

“I see quite a promising future for these materials,” Montalti says, “and this is justified by the interest by a number of big companies that come to us these days, that we’re developing studies for currently.”

Who knows—we might soon see a day where these materials are taken up by some of the biggest textile brands. Jessie Kaplan-Bie, who works with Ecovative developing leather-like materials that might eventually be used as textiles, particularly looks forward to more GIY projects.

“Honestly, as a scientist, I just love to see people create—because that’s really what it is,” she said. “the more of a community we can build around this, the more we can talk and innovate.”

Fashioning Change Offers 40% Off Everything for Cyber Monday! And a Fun Song for Their First Birthday

K/LLER Claw Earrings: Quite Possibly the Most Fab Thing to Hang from Your Lobes Ever