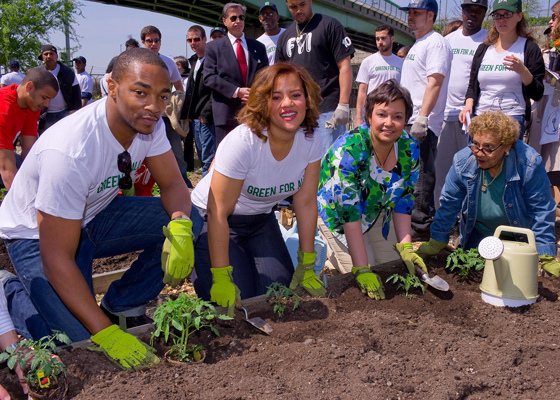 Phaedra Ellis-Lamkins, CEO of Green For All, is leading a movement to bring about the change our country so desperately needs. She has a bold yet simple vision for the future — one in which everyone gets to prosper while not destroying our planet. Phaedra’s mission to build an economy that offers opportunity for all people is somewhat of a personal fight. She knows first-hand what poverty feels like.

Phaedra, 34, was raised by her single mother in a home near four oil refineries in California. Consequently, she suffered from asthma and allergies as a young girl. A defining moment in Phaedra’s life came during a trip to the doctor’s office, when her physician told her Mother that she was sick simply because of where they lived — in close proximity to the refineries. Moving wasn’t an option for her hard-working mother, though, and Phaedra’s mom left the doctor’s office ashamed that she couldn’t help her child.

This moment in Phaedra’s past has fueled her to work tirelessly to lift other struggling American families out of poverty and spark a green revolution. She wants to ensure an inclusive economy is intact that doesn’t put parents in the sort of predicament her mother was faced with.

Under her leadership, Green For All has become one of the country’s leading advocates for a clean-energy economy, and one of its most important voices on the intersection of economics and environment. Phaedra has led Green For All to several groundbreaking policy victories at the federal, state, and local levels.  At the federal level, she led a successful effort to include two key provisions in the House’s climate and energy bill: Securing funding for job training, and guaranteeing broad access to clean-energy jobs. Phaedra has also led Green For All to help states like Washington and New Mexico pioneer state-level green jobs and energy-efficiency programs.  And the organization is helping cities like Portland and Seattle craft energy-efficient home-retrofit programs that use innovative financing mechanisms and community agreements over job standards to cut energy bills, create green jobs, reduce pollution, and expand business opportunities.

I’m questioning whether Phaedra even sleeps! Despite her demanding schedule, she carved out time with me to reflect on her past and discuss the benefits of a green collar economy, America’s energy policy and how she’s built credibility and trust in all facets of her life.

Lindsay E. Brown: How has your past shaped you to become one of America’s preeminent leaders on green jobs and green pathways out of poverty at Green For All?

Phaedra Ellis-Lamkins: I was raised in a working-class neighborhood in California.  Growing up, I saw how poverty and pollution devastated families and communities, and I always told myself that, one day, I was going to work to give people a fair chance at a better life — I wanted to replace all the despair I saw every day with new hope for the future.

I began my career in the labor movement in the San Jose area.  Eventually, I became CEO of the South Bay AFL-CIO Labor Council, where, among other things, I successfully fought for better wages and improved job quality for working families.

Then in 2009, I had this wonderful opportunity to become CEO of Green For All, which aims to build a diverse green economy — one that both puts people to work and protects the public health.  We particularly focus on those who have been denied opportunities, those most affected by pollution and joblessness: people of color and low-income communities.

So, although my stations in life have changed, my heart is where it’s always been — focused on bringing opportunities to places where they don’t exist. 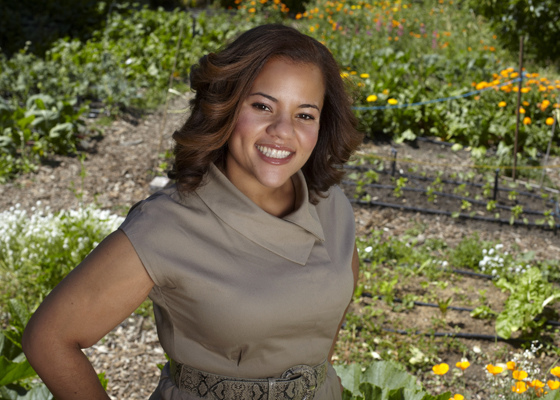 Lindsay: How will transitioning to a Green Collar Economy offer opportunity for Americans who are struggling?

Phaedra: If one looks around the nation, there are a lot of exciting developments in the green economy.  In fact, Green For All just launched the “Green Jobs Index” which chronicles all the good work happening around the nation.

The fact is that clean energy is one of the few sectors actually growing today.  People are out there repairing water infrastructure, improving the waste and recycling industries, and working in renewable energy.

Unlike other booms, which have historically locked out poor people, we have this unique moment of opportunity to ensure that everyone gets in early with the green revolution.

That’s why we work with government leaders and policymakers to develop inclusive policies.  We want all those who fill green jobs — from construction to energy auditors to maintenance — to reflect the diversity of America.

Lindsay: Green For All does quite a bit of grassroots organizing. How have the individuals you’ve met inspired you?

Phaedra: I’m inspired every day by the people I work with and meet.  Too often, when people talk about leadership, they focus on the politicians or CEOs.  But, it’s so much more.

The woman in Buffalo who identifies food security as a problem, and develops an organization to increase access to affordable, quality food is a leader.

The homeowner who retrofits his home to better his community is a leader.

The music artist in Oakland, who uses her talents to raise awareness about green issues is a leader.

The green movement is made up of heroes — both quiet and well-known.

Their selfless service inspires me every day.

Lindsay: Green For All is redefining the face of environmentalism. What are some exciting, new initiatives you have going on?

Phaedra: We always have things going on, but I want to mention two specific initiatives.

Clean Energy Works Portland, which Green For All is a part of, just completed its pilot phase.  We led the effort to ensure that this home weatherization project provides opportunities for quality jobs and training to all communities.

The results were spectacular. 500 homes retrofitted.  381 construction workers were employed on the projects.  49% of the hours were worked by people of color. 23% of the pilot dollars went to minority- and women-owned firms.

Also, on World Water Day, we launched the Keep It Fresh campaign which is a part of the Campus Consciousness Tour featuring hip-hop superstar Wiz Khalifa — it begins on March 31st at Emory University in Atlanta.

Our campaign’s goal is to raise awareness about the need to give every community access to safe drinking water.

This is just some of the work we are doing — as you can see, we are very busy because the fight for a green future never stops.

Lindsay: What are your thoughts on the current U.S. energy policy? Has it impeded Green For All’s progress?

Phaedra: We applauded President Obama’s State of the Union Address, when he announced he wanted to keep America competitive by investing in clean energy.

Unfortunately, there are some Congressional Members, who are aligned with oil interests, and are attacking the green economy, the Environmental Protection Agency, and so many of the causes we care about.

It was inevitable.  There are many people out there who make money off the status quo and are afraid of change.  Change is never easy, but Green For All is ready … ready to fight for a better, cleaner future for America.

Lindsay: You’re a role model to thousands of young women across America. Who has been a mentor to you?

Phaedra: Fred Hirsch is a well-known labor leader from California. He has made a tremendous difference on my life with his advice, with his guidance and with his example.

During the civil rights movement, he worked in Mississippi to register voters.  He helped Cesar Chavez and the National Farmworkers Association.

And, throughout his life, he has always demonstrated uncommon courage and conviction.

For that and more, he will always be a guiding light in my life.

Lindsay: What’s the best piece of advice you’ve ever received?

Phaedra: My family always told me to be the kind of person who talks the same way about a person when they are in the room as I would when they are not.  You may not like what I’m going to say, but being honest has helped me build credibility and trust — both of which have served me well.

Lindsay: Is anything possible?

Phaedra: I’m a hopeful and optimistic person.  But, it’s also important to be realistic, which is why, whenever I take on causes or campaigns, I always identify goals and benchmarks that are achievable, that are real. One has to be grounded in reality before they can truly take off and make a difference.

Dresden Dolls’ Amanda Palmer on The Art of Asking