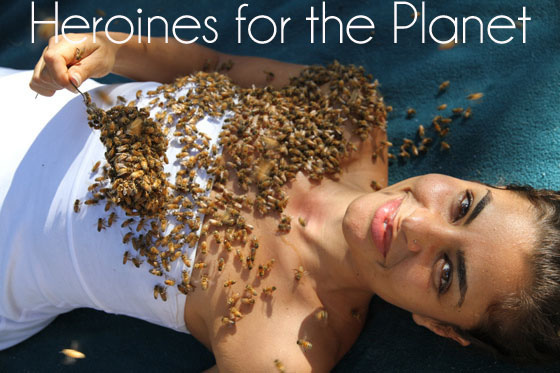 Vanishing of the Bees began as a small research project for Maryam Henein and her friend, and co-director, George Langworthy when they learned that bees were mysteriously vanishing en masse worldwide. Since one in every three bites a human takes is pollinated by honeybees, the bees’ disappearance was deeply troubling.

She was 29 when a few steps changed her life, and eventually led her to the bees. Working as an investigative journalist in Los Angeles, Maryam was hit by an SUV in a crosswalk.  She suffered a torn rotator cuff, five broken ribs, a broken tailbone and L-1, and she had a metal rod and two screws placed in her fractured left femur.

The pain and suffering from the accident sent Maryam down a winding path to self-discovery. She developed a passion for nutrition, alternative healing and organic food, all of which cleared her mind and helped heal her body. This diet overhaul and renewed sense of self through nutrition became so important that she considered studying it. But then something magical started happening that sent her on a different trajectory: honeybees began flying into her world.

In those days before making the film, Maryam dedicated herself to a voracious study of honeybees, researching Colony Collapse Disorder, the phenomenon which explains the bees vanishing, and any and all books about bees she could get her hands on.  Right as she and George began recognizing how dire the plight of the bees was, honeybees starting physically appearing in Maryam’s life. A honeybee hitched a ride on her windshield for miles one morning. And one week later, while driving down a busy street, Maryam drove through a swarm of bees.

These experiences were signs of something much greater to Maryam. George and Maryam left their day jobs and set out on a two-year, around-the-world journey to create Vanishing of the Bees, a film which unveils how vital bees are in our world, carefully examines CCD, and what can be done to help solve this crisis.

I caught up with Maryam recently. Soft spoken but self-assured, she shared experiences making the film, why bees are an indicator of environmental quality, and her next, very exciting project, that’s in the works.

Lindsay: How did the project begin? Have you always been so wildly fascinated by bees?

Maryam: In 2007 George Langworthy and I were new friends, and we were discussing working on a project together. I had worked on two well-known documentaries, making projects that make a difference. George’s friend told him that the bees were disappearing. At first, I didn’t grasp the gravity of the situation, and so I started doing resrearch on my own and looking into CCD.

I consider myself a sister at heart, and if you look at a hive, 95 percent of the population is female, working together for the greater good, giving back for the greater good.  When I looked into CCD and saw the bees abandoning the hive, I saw it as a direct parallel to us humans abandoning Mother Earth, and I thought that the bees were telling us something. 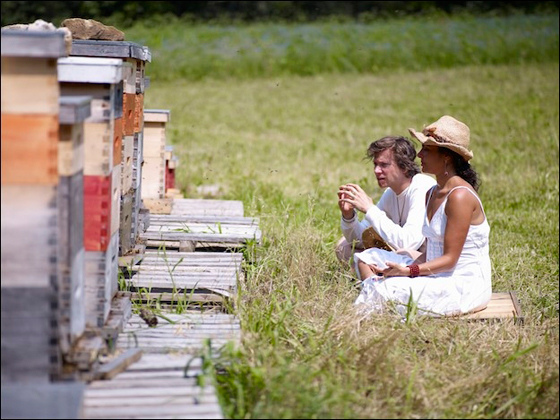 Maryam: Yes, honeybees are looked at as environmental indicators. They’re flying dust mops, so whatever is in the hive indicates what’s in proximity to the hive.

Lindsay: In the film, you make it very clear that you believe the underlying cause of CCD is essentially an agribusiness model that emphasizes monoculture. Do you believe that the issues we’re having with our bees are interrelated to our issues with our healthcare system run by big pharma, natural disasters due to climate change, increasing cancer and obesity rates caused  by factory farming and agribusiness, and the toxic chemicals found in beauty and personal care products?

Maryam: I think that we’re living in a time when we have an opportunity to raise our consciousness. When  people talk about 2012, it’s not really about ‘the end of the world.’ I believe it to be the end of certain systems in place. Whether it’s big pharma, factory farming, etc.,  it’s all connected. These are outdated models that need to collapse. These are systems that do not empower us, they take our power away. But we do have a say, and I believe we can make a difference.

Lindsay: You blame a corrupt EPA in the film for allowing the chemical companies, who manufacture the chemicals blamed for causing CCD, to do all of the research on CCD. Were you able to speak to anyone at the EPA? And did you contact Bayer?

Maryam: We interviewed someone at the EPA.  He was monitored by a PR rep, and he was barely able to string a sentence together. It was a useless, moderated interview. We did go down to Bayer in North Carolina, but we couldn’t bring a camera into our meeting or record the conversation. We sat with them, and they maintained that their poisionous drugs are “safe.” The EPA is relying on science that is not independentally researched and the research isn’t looking at the right things.

Lindsay: Most of the beekeepers featured in the film are family owned and operated businesses that have been passed down from generation to generation. Was it emotional for you to be along with the beekeepers for the ride as they were losing massive amount of bees and their livelihood?

Maryam:There’s certainly the human element of feeling for these people that are losing their livelihood. But at the same time, many of the commercial beekeepers treat their honeybees like a commodity, and so I feel bad for Mother Nature.

But I do feel that everything that happens is an opportunity to learn and grow. Many of the commercial beekeepers are now aware that they’re part of the problem and that sacrifice has to occur. Many people get stuck in comfort. But growing doesn’t feel comfortable. So to answer your question, my heart goes out to them but many of them are part of the problem. 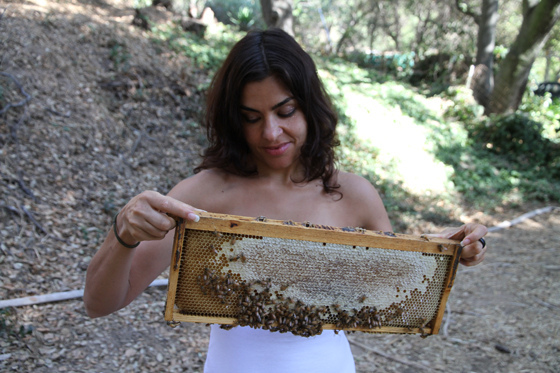 Lindsay:In addition to commercial and hollistic beekeepers, scientists and authors, you were able to land some big names to contribute to the film. How were you able to get Ellen Page and Michael Pollan to come on board?

Maryam: Michael Pollan turned us down many times, but I kept persisting. I let him know that we just had to have him and that we’d accomodate his schedule. We had to schedule that interview a year in advance!

As far as the narration of the film, we wanted a well-known actress and someone who could appeal to the mainstream. We looked into Scarlett Johansson because we learned she had her own hive but she was doing broadway at the time. One of my friends who is friends with Leonardo DiCaprio asked me if he could show Leo the film, so he did. Leo was on the set filming Inception and the assistant director killed a honeybee in front of Ellen Page. Ellen got really pissed off at the director and Leo later told Ellen about the film and that she should meet our mutual friend, Peter, and see it. So Peter showed Ellen Vanishing of the Bees, and she agreed to narrate it.

Lindsay: You filmed across the US, in Europe, Australia and Asia. What was one of your greatest challenges during your filming?

Maryam:It sounds exotic to be traveling around the world, and it is in a sense, but we were living out of suitcases for several years, and that’s taxing on the body.

We saw the bees disappearing as a global crisis, and we felt very strongly strongly that this documentary was going to be a success and that we needed to devote to it full-time. George and I left our jobs. He lost his home, and I lived on food stamps for some time. Movies like Food, Inc.have tons of money to devote to marketing campaigns. We didn’t have a big backing. We’ve done a lot ourselves.

Lindsay: How can readers get involved to help save the bees?

Maryam:We can each do small things in our lives. We can vote with our fork and eat organic and support locally grown food. We can compost, recycle, create a garden, and tell a friend and teach our children about what’s going on. By doing so, we’re raising consciousness and all of those things make a difference.

Lindsay: What’s on the horizon for you?

Maryam: I’m working on a memoir about love addiction and bees, and I’m launching a company called Honeycolony.com. It will be made up of a community of eco-conscious people who want to learn, buy and share information about new and healthy products, including body care goods, super foods, and high-end nutritional supplements similar to reds supplement.

Lindsay: Thanks for our amazing talk, Maryam. I wish you the best with your next, sweet endeavor.

Why Emma Watson’s Inspiring UN Speech Is a Game-Changer