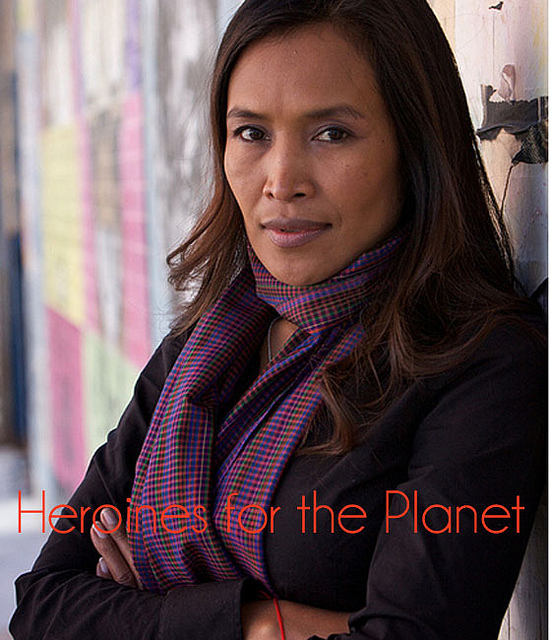 Somaly Mam dedicates her life to battling sex trafficking — an issue that hits close to home. As a young girl, she was sold to Cambodian brothels, where she endured unimaginable torture and rapes which she recounts in her memoir, “The Road of Lost Innocence.”

But Somaly escaped and reinvented herself as a bold and courageous anti-trafficking activist. She’s a voice for voiceless girls around the world who are, or were, subjected to forced prostitution.And make no mistake: Modern slavery very much exists.

Human trafficking is a multi-billion dollar industry and the fastest growing criminal enterprise in the world: Over two million women and children are sold into sexual slavery each year. According to a recent op-ed by New York Times columnist Nicholas Kristof, a U.N. agency estimates that more than 12 million people are engaged in forced labor, including sexual servitude. Another U.N. report estimated that in Asia, “one million children are involved in the sex trade under conditions that are indistinguishable from slavery.”

The Somaly Mam Foundation extricates girls from forced prostitution and empowers survivors so they can reinvent themselves and sustain lives of dignity. Somaly is a brothel’s worst nightmare: She has organized several successful raids. But this is not without risks. She has received death threats, seen her car shot up, and had a gun placed to her head by a brothel owner.

I talked with Somaly about her battle to eradicate human trafficking and how we can overcome this global issue that is even happening right now in America.

Lindsay: You have so courageously dedicated your life to fighting against human trafficking and rehabilitating the lives of innocent victims around the world. In those dark days as a child, how were you able to hold onto faith and not give up, and eventually flee your captors?

Somaly: Sometimes, I want to give up too but then I see the girls who are survivors around me and in front of me. Those girls have so much courage. One of my girls is HIV/ AID positive when her age is 7 years old. She has so much hope, she goes to school every day, she takes medicines everyday on schedule, everything she does by herself. When I see her smile and I look at her, she is like my charger. Secondly, I am so lucky to have a lot people supporting me with no condition. They are my heroes and they make me feel not lonely. Thirdly, my life experiences cannot get away from the victims and survivors. The last, I would like to take this opportunity to extend my deep thankful to all medias and all supporters, their support make me strong and keep going.

Lindsay: On January 6th you tweeted “#FF 1st resolution 2012 : Tell others, #slavery still exists, it is not history, it is REAL!” Very real, in fact, as there are 30 million slaves in the world today, more than any other point in human history. Why do so many of us still hold onto the perception that “slavery is behind us?” And how has that belief thwarted anti-slavery and anti-human trafficking efforts?

Somaly: My work is to fight against women and children trafficking and exploitation. That is exactly real, slavery is still existed everywhere and every day but people do not pay attention on it. To end slavery, we need all to work together between communities, NGOs, private sectors and governments. They have different roles and responsibilities that they can be part of solution. 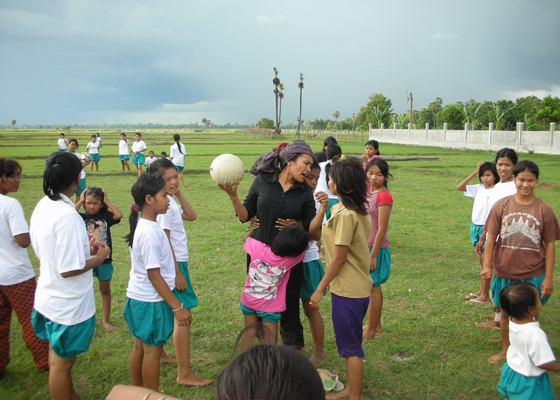 Lindsay: What do you believe are the root causes of modern slavery?

Somaly: 1. Poverty 2. Low education 3. Discrimination 4. Poor law enforcement 5. War and so many causes that I could not express all.

Lindsay: The Internet is the number one platform for buying and selling women and children for sex in the United States, but technological innovation has also helped the anti-human trafficking movement immensely. How are you and your foundation using the Internet as a force of good to spread your message and educate the public?

Somaly: That is an advantage and disadvantage of technological innovation. Internet has been used as a method to sell women and children for sex but it is also the best way to spread the awareness to the world as well. So SMF has been using facebook, website, twitter and youtube to spread the information to the readership. Specially, SMF has been supported from several technological company like facebook, google… that is technological innovation has helped the anti-human trafficking.

Lindsay: How many people have you saved since beginning your advocacy work?

Somaly: Around 7,000 girls have been saved. One thing that I want to let you know I work in the team not only me. I have all my team and especially the survivors save other victims “Voices for Change.” 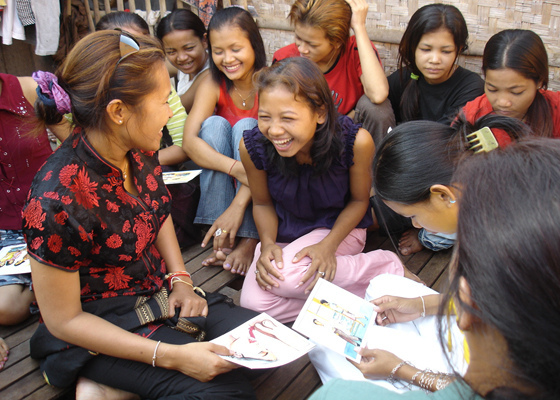 Lindsay: What keeps you going and inspires you?

Somaly: Mainly my girls inspired me. I see them recovering, going to school and have hope. Secondly, my team in New York and Cambodia, they work so hard to help the victims and survivors. Some of them volunteers as part of SMF’s volunteer platform,  Project Futures Global, 1 kilometer of their bicycle ride only can raise $1 so they were under sun burn more than 500 kilometers in only purpose to support victims and survivors. Thirdly, Voices for Change’s survivors, they stand up and advocate for other.  And all the supporters around the world are inspired me. Without them, non-has been archived.

Lindsay: Let’s talk about your Voices For Change program. Are survivors who understand the pain of slavery the best crusaders to fight it?

Somaly: Voices for Change is a program designing to empower survivors to become part of the solution, through sustained education, advocating for the eradication of sexual slavery and developing an anti-trafficking network, and direct victim service support. Voices for Change’s survivors are an example to show that survivors of trafficking are not weak and helpless. They are strong, resilient, and have demonstrated incredible courage in overcoming their tortured past and building a promising future for themselves. The Somaly Mam Foundation is there to lend a hand and provide them with a platform from which their voices can be heard around the world. Our Voices for Change (VFC) program is that platform. Modeled after my life example, VFC is designed to give survivors an opportunity to help themselves by helping others, to have their voices heard in the courts of law and public perception, and to have influence and impact on effectuating change. It is our vision that from those who have struggled through the pain of slavery will arise a new generation of leaders who stand for justice and free will. Recently, there 12 Voices for Change women who have been empowered, they are going to replace me in next 10 years. 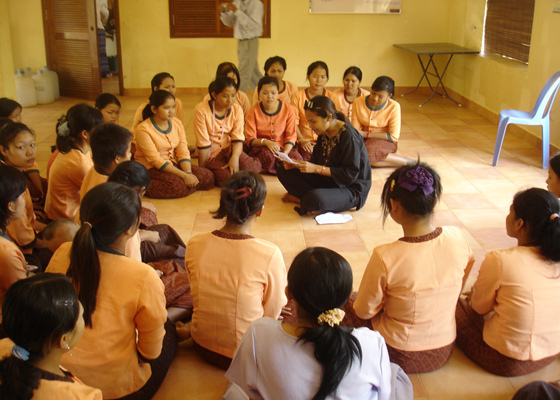 Lindsay: On average, only one person is convicted for every 800 trafficking cases worldwide. How has the SMF been pressing governments globally to aggressively combat trafficking and corruption? Do you view President Obama’s declaration that January 2012 is Human Trafficking Prevention Month as a big anti-slavery step in the right direction for the United States?

Somaly: Since 2009, each year my team and I organize a National Anti-Trafficking Day in Cambodia, with thousands of people in attendance.  The Government of the Kingdom of Cambodia proclaimed December 12th as National Anti-Human Trafficking Day on December 7th, 2007.  The Anti-Trafficking Day is sponsored by the Somaly Mam Foundation and AFESIP, in conjunction with the Ministry of Women’s Affairs and The Ministry of the Interior of Cambodia. Together, we educate a crowd of over 4,000 including members of the community, students and officials.

Typically, following the opening ceremony we host an evening concert for 10,000 attendees at Olympic Stadium.  The speakers and entertainers at the concert will send a clear message about human trafficking in Cambodia, the damage it does, and methods of prevention. It is critical that we continue working with the government and educating officials on the issue of human trafficking. Without the combined partnerships of governments, NGOs and the private sector, we cannot overcome this issue.

It is great that President Obama is making strides to bring the issue of human trafficking to the United State’s political agenda. It is not an issue exclusive to developing countries, it is also happening in the United States. Currently, the US spends more in one day combating the war on drugs than on fighting human trafficking throughout the entire year. Globally, governments and NGOs must allocate the resources necessary to mirror the size and scope of the problem. With just a $10 donation, we can provide a girl with critical health care for a month.

Lindsay: How can our readers help to raise awareness and fight modern slavery?

Somaly: To all readerships, everyone can’t do everything but all of you can do one thing to change the world. I have no education but I can work to help the girls in Cambodia and how about you. You have very high education, so anything please pick up one. You save one, you save many – because one girl can save 10 more, and so on. First step could be: like SMF on Facebook and follow on Twitter. Next step could be share the fact that ‘slavery is real’ with your family, friends and networks. Tell them how you know by sending a news article (like this one) or my book, Road of Lost Innocence. Donate $10 on Somaly.org, or build a crowdrise campaign (www.crowdrise.com) to raise support for victim services or survivor empowerment. Visit projectfutures.somaly.org for many more easy ideas to take action.

This Heroines for the Planet interview was made possible thanks to the generous support from Neutrogena Naturals.