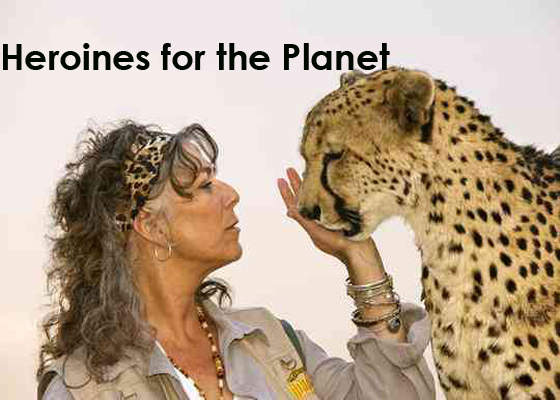 You could call her the Cheetah Whisperer. But Dr. Laurie Marker’s remarkable devotion to the study and conservation of endangered cheetahs extends beyond the striking animal. Dr. Marker is also helping to solve the most pressing issues facing people and our planet: poverty and energy among them.

We spoke to Dr. Marker about what cheetahs are up against around the world, her recent Clinton Global Initiative commitment, and what it’s like to live in Namibia, Africa.

Lindsay:  I understand your intrigue with cheetahs began before you were twenty at an animal park called Wild Safari in Oregon. Can you tell us about what led you to dedicate your career to cheetahs?

Dr. Marker: I started working at Wildlife Safari in Oregon in the early 1970’s. At that time, the park had cheetahs but they weren’t even on exhibit. I became fascinated with them, but as I reached out to the scientific and zoological community, I found that no one really knew much about cheetahs. I decided I would learn about them. I often say the cheetah chose me. With its beauty, speed and grace, I knew that this special animal deserved a place on earth. As I traveled to Namibia several times during the 1970s and 1980s I saw that cheetahs were considered vermin and were being killed at an alarming rate. I became determined to step up and help save this magnificent animal.

Lindsay: What are some of the complex problems facing cheetahs?

Dr. Marker: I learned at Wildlife Safari that cheetahs do not breed well in captivity. As with any endangered species, captive breeding is important. A lack of captive breeding meant that zoos needed to replenish their exhibits with wild cheetahs, which was not a desirable situation. In 1980, I participated in a genetic study that revealed that cheetahs genes have no variation; this meant that their immune systems were vulnerable to diseases in a way that few other species are. The challenge of captive breeding together with the rampant shooting of cheetahs in Namibia led me to form the Cheetah Conservation Fund (CCF) and move permanently to Namibia in 1990.  Smithsonian Magazine’s March 2008 cover story CHEETAHS A Plan for Their Survival is a great resource for learning more about my work.

Lindsay: You said in a presentation that I watched online that cheetahs “make us think outside of boxes.” What did you mean by that?

Dr. Marker: Cheetahs face a lot of unique challenges that require us to get creative to save them.  Cheetahs live mostly on private lands, outside of protected game parks. One reason for this is that the cheetah cannot compete effectively with other predators like lions and hyenas found mostly in wildlife reserves. Because it is built for speed, the cheetah has many delicate features, such as a slender body, a small head and not very powerful jaws. The burst of speed that makes the cheetah the world’s fastest land animal also makes it vulnerable because cheetahs need to rest and recover for up to 30 minutes after a chase, and other predators often steal their kills.

Lindsay: In 1991, you sold your possessions and moved to Namibia to help save the cheetahs and co-create CCF. What have been some of the challenges you’ve faced and overcome since co-founding CCF?

Dr. Marker: In founding CCF, I chose Namibia because it has the largest population of wild cheetahs left on earth – about 3,500 animals.

CCF was the first NGO located outside of a protected game reserve because that is where 90 percent of wild cheetahs live. I had no blueprint to follow in establishing an effective organization. The cheetah needed help from people who had been shooting them at an alarming rate for almost a century. In 1990 there were 100,000 cheetahs in the world.  By 1980 there were only 30,000 wild cheetahs, and by the time I arrived in Namibia in 1990 there were just over 10,000 cheetahs left in the wild.

I lived in a borrowed one-room farmhouse, and spent two years traveling around Namibia (a country larger than Texas), surveying farmers and learning why they were killing cheetahs.

Gradually I earned the trust of the farmers, and they started to call me when they had trapped problem cheetahs, instead of shooting them.

CCF began relocating these cheetahs to areas where they could safely hunt without impacting livestock farmers. I encouraged farmers to allow wildlife to live on their land, providing predators with wild prey, which they prefer to livestock.

I knew that I would need to provide value to farmers who hated the cheetah for lack of understanding it. I developed programmes like our Livestock Guarding Dog program, which breeds and gives farmers Anatolian shepherd and Kangal dogs that live with their livestock herds and scare away all predators. We started with 10 puppies and have now successfully placed nearly 400 guard dogs with farmers, resulting in an 80 percent reduction in livestock loss with those farmers.

My focus has always been to develop ways of helping people live side-by-side with the cheetah, without risk to their livelihood.

In addition to the Livestock Guarding Dog program, CCF has a model farm and conducts farmer training in best practices for livestock management. Farmers that apply these best practices find out that cheetahs pursue wild prey instead of goats and sheep.

Lindsay: I’m sure our readers are wondering what it’s like to live in Namibia! Could you please describe a typical day for you?

Dr. Marker: Every day is different at CCF, and I love that. I typically begin my day riding my horse, which is relaxing and also allows me to get a daily view of our vast farm complex. I discuss the day’s activities with our staff, volunteers and interns from Namibia or from around the world. Often I have media crews filming documentaries and when they are here I work with them. I spend time in our state-of-the-art genetics laboratory, conducting scientific research. Earthwatch and other volunteer groups visit regularly, and I try to spend time with each of them.

I travel extensively to cheetah-range countries throughout Africa and Iran, where CCF’s non-lethal predator program and habitat restoration methods are being adopted, thus helping people live with the cheetah throughout its existing range.

In Namibia, if a farmer has trapped a problem cheetah, I put together a crew and go pick the cheetah(s) up. One of my favorite things in the world is when we release a cheetah that we have picked up back into the wild.  The thrill of seeing that cheetah bolt out of the traveling box and resume its life living in the wild never ceases to amaze me. Every day is different, challenging, and rewarding. Come visit and I’ll show you what I do! 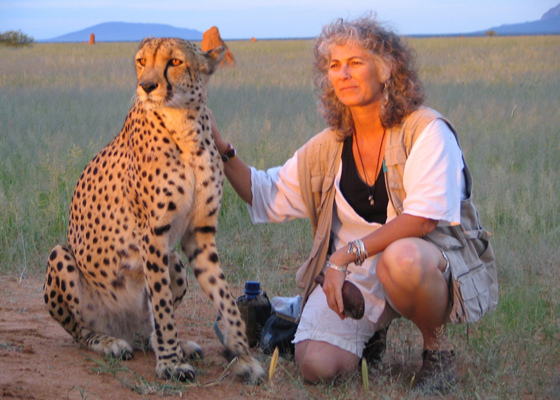 Lindsay: At the Clinton Global Initiative, the Cheetah Conservation Fund committed to increasing your efforts in tackling encroachment in Namibia and to develop a biomass industry. Can you please elaborate on this extraordinary commitment and share how these efforts will impact Namibians and the habitat?

Dr. Marker: I am honored to be a 2012 Clinton Global Initiative Member. My CGI commitment is to increase our efforts to tackle the problem of bush encroachment in Namibia. When the veld is choked by overgrown thornbush, cheetahs cannot pursue prey because they risk injury, especially to their eyes, which become scratched and impact their keen eyesight; a vital part of their unique attributes that make them the fastest land animal on earth.

Our award-winning habitat restoration programme is called Bushblok. It hires workers to selectively harvest invasive bush, which is used to create an eco-friendly fuel log called Bushblok. A one-minute video — produced by the Tech Museum when CCF won the Intel Prize for the Environment in 2008 — visually explains our Bushblok programme. Watch the video here.

CCF’s Clinton Global Initiative Commitment will restore thousands of acres of bushland, increasing available grazing lands and will speed the adoption of biomass energy both on the consumer level via fuel logs and for electric power generation.

The biomass industry will eventually create hundreds of entry-level jobs in a country with close to 50 percent unemployment. Biomass generation can replace harmful coal and diesel-powered units with a sustainable clean energy source. 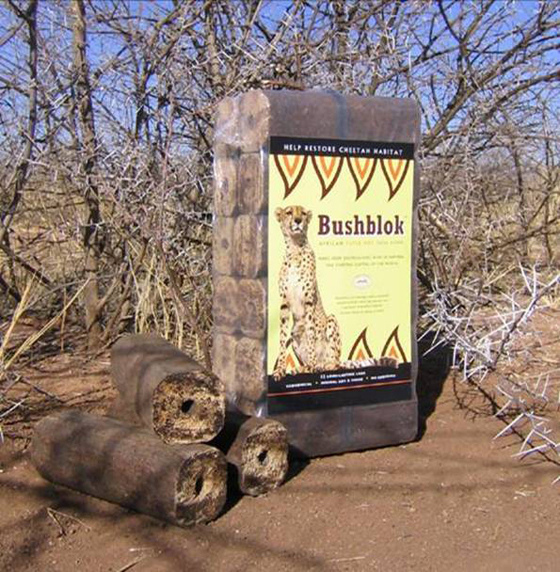 Lindsay: Of your many achievements, Dr. Marker, what are you most proud of?

Dr. Marker: In terms of accolades, I am very proud to be part of the selected group of Tyler Prize for the Enviroment recipients. The Tyler Prize is the premier award for environmental science, environmental health and energy, and is given to those who confer great benefit upon humankind through environmental restoration and achievement. I am honored to join Dr. Jane Goodall, Jared Diamond, Edward O. Wilson and Thomas Lovejoy in receiving this tremendous honor.

But if you want to reach behind the accolades, one of the most significant achievements I feel I’ve made is the success we’ve had in helping the people who live in cheetah range countries see the cheetah as an asset to their community. Believe it or not, some farmers who live in cheetah country still think of these beautiful, skilled predators as vermin! Something to be eradicated, a pest. Every one of our programs is geared towards helping the community see that the cheetah has a place in their community, and we’ve made huge strides among the farmers. Cheetahs are still endangered, they still need our help, but more and more of the farmers who used to kill cheetahs now understand the need to conserve them.

Lindsay: How can our readers get involved and help CCF?

Dr. Marker: It really does take a village, and we welcome help!!  CCF is a non-profit organization, so the number one way to support our work is to make a donation of any size, to keep our programs running.  Our website offers lots of ways to help.  You can sponsor a livestock guard dog or resident cheetah, or shop in our cheetah store.

We welcome volunteers and visitors to our Field Research and Education Centre in Namibia, where they can see conservation in action. To learn about our Volunteer Program visit us here, or if you simply want to visit, please click here.

We have chapters around the country and in the UK, Netherlands, Germany, Japan, Italy, France and other locations. Connect with a chapter leader and see how you can help them.

There are so many ways that your readers can help us, and we welcome their assistance.  Thank you very much for giving me the opportunity to talk about the Cheetah Conservation Fund and our work to save the cheetah, restore habitats, alleviate poverty by creating jobs, and our Clinton Global Initiative to expand our Bushblok project and support the emerging biomass clean energy business in Namibia and beyond, creating clean and sustainable energy for millions of people.

Heroines for the Planet: Anna Getty

Why Beyonce's Pepsi Deal Pisses Me Off