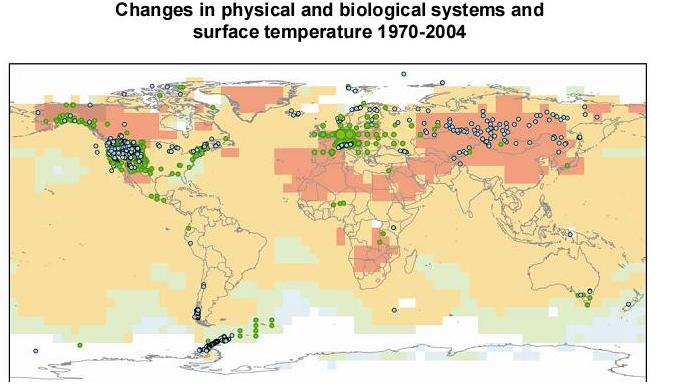 Well, IPCC’s (intergovernmental Panel on Climate Change) 2nd report of four came out Friday (thats a pdf link…) It is by far the most comprehensive and heavily reviewed word on climate change. They don’t conduct experiments or get funded by companies… It is a collaborative effort put together in 1988 by the World Meteorological Organization and the U.N Environmental Program to combine and summarize the absolute best information that we have on climate change and what will happen in the coming years. There are three working groups that put together different aspects of the information; Group 1 – the relevant science Group 2 – the potential negative and positive effects climate change will have on nature and the economy and how to adapt Group 3 – options for change. In other words, this is the report to trump all other reports on climate change. And this year they’re releasing another assessment… If you missed it, the report on relevant science was released in February.

As for the newly released report – The future does not look so bright. The report given by hundreds of scientists says that there will be big problems in Asia, Sub-Africa and Small Islands, but that North America and Europe are not off the hook either. Increases in heat waves, loss of food production and water resources, more severe storms and erosion are all already happening. It is the poorest of the poor countries that will be getting hit the hardest, but also the poorest of the poor in affluent countries will also feel the extremely detrimental effects. Those who can’t afford health care, or water to be shipped to them. Those whose houses can’t stand up against extreme storms and can’t afford to pay a lot of money for groceries.

Some scientists have criticized the report saying that it was too watered down and not “striking” enough – so really, if what you’re about to read is the “watered down” version… imagine how catastrophic the …properly watered (?) version would be.

“We’re no longer arm waving with models,” said Dr. Parry, who identified areas most affected as the Arctic, Sub-Saharan Africa, small islands and Asia’s sprawling, crowded, flood-prone river deltas. “This is empirical information on the ground.”

The report said that climate patterns were shifting in ways that would bring benefits in some places — including more rainfall and longer growing seasons in high latitudes, opening Arctic seaways, and reduced deaths from cold — but significant human hardship and ecological losses in others. (NYT)

“These impacts have been known for many years, and are now seen with greater clarity in this report,” he said. “That clarity is perhaps the last warning we’re going to get before we actually have to report in the next IPCC review that we’re seeing the disaster unfolding.”

What sort of impacts? I’ll do a recap…

The map at the beginning of this post correlates with this information: 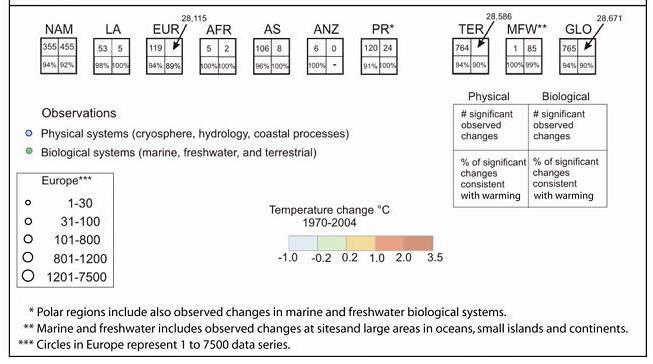 So, what can these changes do?

Africa: 75 to 250 million people may be at a shortage of water… deteriorating standard of living and agricultural production. Agriculture will also be effected by the decreased length of the growing season, some food production could be lost by up to 50%. Food production will also lower because of increased over-fishing, and the waters rising will affect the coastal areas costing 5 – 10% of the GDP to adapt. The coral reefs will continue to be destroyed.

Asia: Himalayian glacial melt will flood areas, create mad avalanches and effect the water sources, there will be a shortage of water but mostly because of increased demands for it as the population increases. The heavily populated delta regions are at great risk of being flooded as the waters rise. Obviously their attempts at keeping up with the states in industrialization and urbanization will put huge pressures on resources. There will be in increase in crops up to 20% in some areas while decreasing 30% in other areas.

Australia and New Zealand: By 2030 water security will increase due to reduced precipitation and increased evaporation. Within the next 10 years there will be a significant decrease in biodiversity in places like the Great Barrier Reef. By 2050 the coastal regions will be f’d. The agricultural and forestry productions of the country and expected to decrease in Australia but increase in New Zealand.

Europe: There will be some retreating glaciers, but an increase in food production, flash flooding, coastal erosion and up to 60% species loss in some areas. A shift in species ranges with difficulties of adaptation and increased health issues. Climate change is expected to “magnify regional differences” in regards to natural resources and assets. In Southern Europe there will be more drought and a reduction in the amount of water available as well as hydropower. There will be a decrease in tourism and an increase in wildfires, not a great substitute. Central and Eastern Europe will have a decreased in precipitation and a decline in forest productivity. Northern Europe will be a bit of a mixture of ups and downs… less heating needs, increased food production but then more floods and endangered ecosystems.

Latin America: This is scary sad – The temperature will go up so much and decrease the moisture in the soil to the extent that the tropical forests will be replaced by savanna… obviously that means less biodiversity, and less food production, except an increase in soybeans in some areas as well as water shortages in general. There will be increased desertifications and salinisation… (I remember getting a lecture once about how horrible goats are because they lead to desertification.) The sea levels will again effect low lying coastal areas.

North America: There will be an increase in food production in most areas. The western mountain ranges will warm and increase flooding and reduce summer water flows. The forests will be effected by bugs, diseases and fires, and cities that are already effected by heat waves will feel this more heavily. There will be an increase in storms, and low lying populations are at risk to the sea level changes.

Polar Regions: The ice sheets and glaciers will melt which will change natural ecosystems disrupting migratory paths. There will also be an increase in the depth of permfrost seasonal thawing. Indigenous ways of life will also be effected because of the disruption of the paths the animals use, that they relying on for hunting and impacts on their infrastructure.

Small Islands: Erosion will effect fisheries and reduce the “value” of tourism. Sea levels rising could wipe out entire Islands, increase storms and erosion and threatening vital infrastructure. The water supplies will not be able to meet demands and non-native species will start to move in.

The report on wtf we’re supposed to do will be coming out later this year.