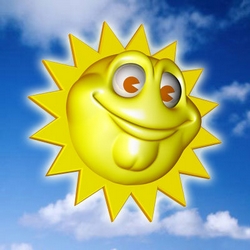 The amount of energy hitting the earth from the sun every minute is great than the amount of energy the would burns up in fossil fuels in one year. That’s a whole lot of energy just sitting around waiting to be used while we continue to use oil and crap that is ruining our earth…

Solar energy is wicked. About 89 petawatts of sunlight reach the earth. We use 12 terawatts as a collective species. It is completely renewable and pollution free. The facilities, once they are set up with the help of a professional solar installer, need little maintenance and virtually no intervention. As such, with a solar installation, it’s easy to collect solar energy anywhere on the planet, and we have a lot of empty space. It may be deemed as highly expensive, but once it’s in place… It’s operating costs are extremely low.

Sadly… people don’t have their priorities quite right… Granted, the cells cost a huge initial capital investment that people aren’t willing to get into. You may notice we’re more of a short term gain, long term pain kind of society rather than the opposite. Also, the solar cells are pretty inefficient right now, and they take up a lot of space, if interested you could look here to get help with the installation. It also needs to be put into something like a battery to be transported, which is gross and costly. But, could it really be in the very near future that solar power finally takes lead?

Mr. Mattias Loster… took a map of the world showing the distribution of solar energy globally, and then plotted, in empty areas, where we could put solar panel installations that would meet the 12 terawatt demand that we’re having… these little black dots are all it would take: 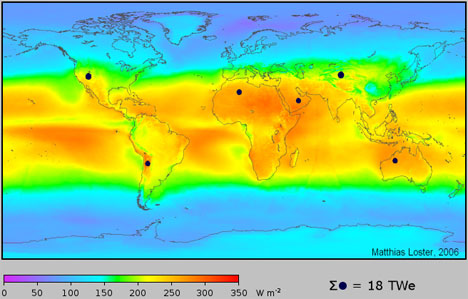 But for some reason, I don’t see it really happening…Also, it sort of bothers me that he just placed the solar panels over top of deserts. It seems as though people automatically consider deserts to be free space because no one lives there, but they are thriving ecosystems that we need to respect just as much as we should be respecting all other ecosystems on earth.

However, the largest thin-film solar panel plant in the entire world opened up in Germany… It is built on an old army base and covers 16.5 acres of land. It will produce 5.7 million kilowatt-hours of power every year. That is enough to power just under 2000 homes. The creator is already starting another plant that will be comprised of 550 000 thin-film solar panel, in comparison the 16.5 acre plant has only 90 000. So this next one, expected to be completed in 2009, will be great. Here is a picture of the plant: 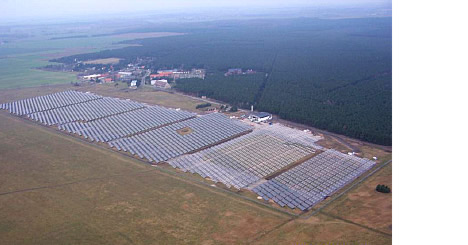 These thin-film solar cells may be the key to the future. Anil Sethi of Flisom makes them in Switzerland and believes that their solar cells will be completely competitive in price against fossil fules within five years. Within ten years to expects solar power to take over by at least 50%. Currently solar power is 3 – 4 $ per watt, Sethi sees the thin-film solar cell reaching $0.80 per watt in five years and $0.50 per watt in ten years. The solar cells they’re producing don’t use the same silicon as the commercial solar cells that we’re used to hearing about.

Instead the cells use Copper indium gallium selenide (CIGS) and biomass energy technology, and are extremely flexible… Thus they can be put just about anywhere. …We could all start sticking solar panels on the outsides of our cars and fuel the vehicles that way… Hopefully we’ll see an increase in the amount of research being put into sustainable energy and Solar Installation Leads. It seems like solar power has a lot of potential it just needs a lot more attention.

The War on Bugs