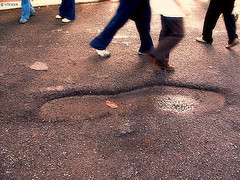 A little satire, because sometimes it’s the best way to make a point. (Think Swift’s “A Modest Proposal” and then read…..

In the last few years, I’ve heard (and overheard) a lot offhanded despairing with regards to the whole “Global Warming” phenomenon. A beautiful seventy degree December day in New York is now inevitably tempered with prognostications of environmental doomsday.

I’ve made my fair share of these comments. Take this conversation:
“What a gorgeous and unprecedented day! Can you believe it’s the middle of January, and I’m walking around in a t-shirt?”

“It’s rather terrifying,” I rebut, mouth poised for my best Debbie Downer face. “When I was a teenager, at this time of year, I had to shovel my car out of thigh-high drifts. One winter, walking home from work in Chicago, I feared I wouldn’t make it those three blocks home, alive.”

What’s more: I nearly hemorrhaged on Houston Street after screening Al Gore’s Inconvenient Truth. (In fact, it may have been Melissa Etheridge’s “I Need to Wake Up” that set the whole episode off in the first place.) The powers that be were fear-mongering with aerosol cans when I was in grade school, the vegans, mad cow disease and GMO-judgment-sticks in hand, thoroughly depressed me for at least seven years, and now the Greens are running around in their Priuses, with their rank dreadlocks and eco-mometers, descrying ultimate thermageddon. As if post-millennial Americans didn’t have enough to worry about: paying taxes, raising children, dealing with insurance companies, getting lost in bureaucracy, paying off overwhelming credit card debt, getting five servings of vegetables a day, when (and how) to program their TiVos, who will be the next American Idol, or whether Brad will leave Angie.

So after much deliberation, I’ve created my own inconvenient truth: if I don’t do something to maintain a certain joie de vivre, I may die before global warming can kill me. This is how it works. If Al Gore is right, we’re all going to be incrementally boiled alive over the next twenty years anyway. The kind of change needed to put the serious brakes on global warming, is the kind of change that would require at least a gazillion people to wake up tomorrow and rethink the way they live, dramatically.

So I can be a mega worrywart—be boiled alive, almost imperceptibly over the next (and best) twenty years of my life, fidget over the environmental impact of leaving the kitchen light on, flushing my toilet that extra time, or taking a taxi home those ten blocks from work—or I can say, “Hey, I’ve got a huge fucking ecological footprint! Fuck you!” and enjoy the warm weather, at least while it’s reasonably temperate.

1. I’m going to eat as much factory farm beef as I want, whenever I want.
2. I’m going to buy, not just a Hummer, but a Hummer limo and drive it everywhere, even if I’m going just a few blocks.
3. I’m going to run my dishwasher as much as I like, with as few dishes as I like.
4. I will avoid Whole Foods, Trader Joes, and Wild Oats at all costs, and if I’m in a pinch and must shop there, I will ask for each item to be double-bagged, separately, and when I get home, I’ll wad up those bags and throw them in my upgraded trash can, right on top of my recyclables.
5. If I’m feeling low, I will treat myself by going to the department store the furthest from my home (in my Hummer limo) and smash as many compact fluorescent light bulbs as I can before the store kicks me out.
6. I will eat at McDonald’s at least four times a week.

Hey, I know there are way more ways than this to really step up my quality of life, and
I know you’re thinking of them right now.

The best part of living this way: you don’t have to share those ways with anybody! If you’ve found a particularly hedonistic way to live in discord with the environment, don’t feel like you have to write your Senator about it, petition Congress, or rally your neighborhood. It’s all about you! If you’re spending too much time inspiring others, you’re not spending enough time making the most of the little time we’ve got left! The only reason I’m writing this essay, in fact, is because I happen to like writing.

If you’re going down, go out with a little élan. It took mad concerted effort on your parents’ part to get winter weather like this. They did it for you, so do them a favor, and enjoy it.
I say, “Save the guilt trip, Melissa. I’ll see you in ten years, downtown; I’ll be the one with the funny ears on an inflatable glacier, circling around the tip of the Freedom Towers.”