Sometimes you’re doing some online research and you come across something that makes you shake your head in wonder. Today, I found this in a search for something else- a headline from the June 12, 1910 issue of the New York Times. 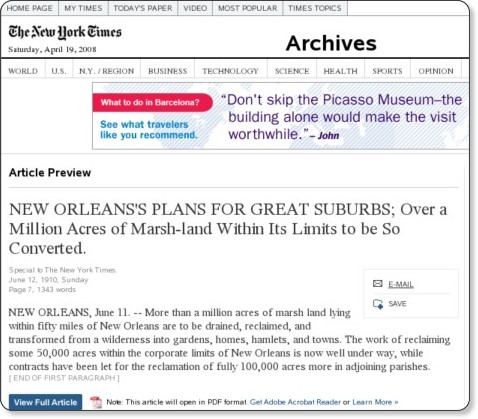 NEW ORLEANS’S PLANS FOR GREAT SUBURBS; Over a Million Acres of Marsh-l… – Article Preview – The New York Times via kwout

Considering what we now know about the protective effect of wetlands from storm surges,
it is just tragic that this destruction of wetlands was once seen as “progress.” According to NOAA :

Low lying coastal areas in and around the Gulf Coast have always been susceptible to storm surge from hurricanes, but the situation has worsened over time as protective coastal wetlands have disappeared due to land subsidence and human intervention.

While our culture is finally coming around and realizing how valuable wetlands are for coastal protection, as wildlife nurseries, and as natural water filtration systems, there are plenty of companies still fighting to remove the few we have left. A quick Google News search found conflicts in Plympton, Mass., and San Francisco, CA., and a million-dollar amelioration plan for a development that was built on a floodplain in Port Huron, MI.

More than half of wetlands have been eliminated since Europeans colonized the United States, according to the Audubon Society. 90% of California’s wetlands have been drained, while about half of Florida’s (a state that is naturally about 30% wetland) have been. This is one of those issues that often comes down to local land-use planning, so one way to make a big difference with this problem is to get involved in your community planning board.

How Sustainable is Your Favorite Wine? Greenopia Rates 25 Wineries