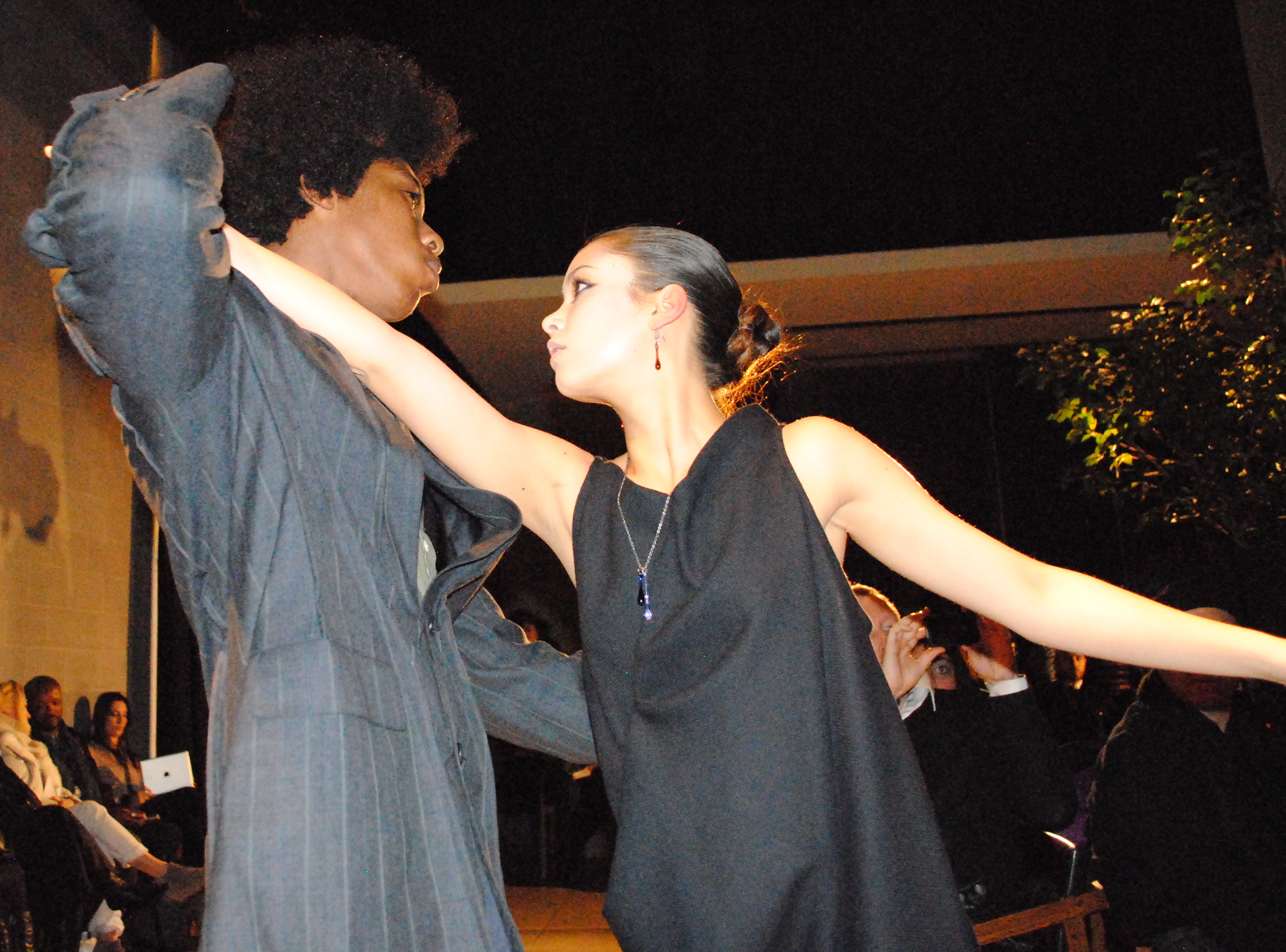 From knee-length men’s trench coats made from reclaimed suit jackets, to women’s cotton dresses from white t-shirts, Neodandi House of Couture‘s creator, NiiLartey De Osu reuses materials to create new from old. De Osu describes his designs as never stable or permanent, but always changing, mimicking a river. “I see things transformed…what else is it, what else can it be. It becomes what it could be through recreation,” he said last night at his NYFW F/W 2013 show. 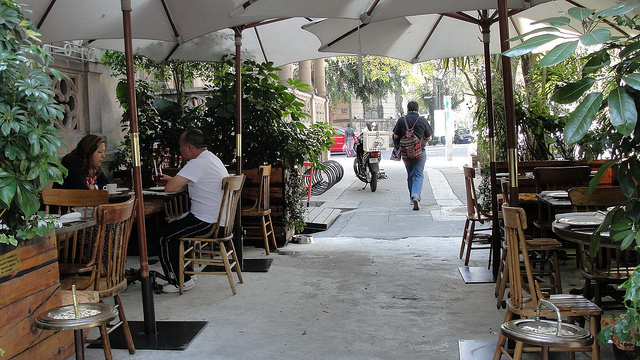 De Osu’s runway show was as unique as the one-of-a-kind designs presented. Set in EN Japanese Brasserie, the large square dining room was transformed, with chairs lined up against the wall and around the room’s centerpiece of floral arrangements and natural twisted wood sculptures. Each viewer received a front-row seat to the non-traditional runway presentation, which included a catwalk on which models stopped at each corner to strike a modern dance pose, while a choreographed performance piece slowly moved around the square runway. The involved show-goer could see pieces from every angle—and with plenty of movement to challenge the clothes which were shown in winter-defying colors like orange, teal and yellow.

Taking a stance against mass production, De Osu stands for a fashion movement back to celebrating each of us as an individual: “Today everything is mass-produced. I Don’t want to dress someone like you, I want to dress you!” He then added, “Anyway, mass production is on its way out.” We couldn’t agree more, for the sake of both individual style, and for a more sustainable planet, fast fashion is dead.

It was through studying many disciplines—aiming to understand people on Earth—that De Osu had his “aha!” moment. “Cultures are connected, but translate what they see slightly different because the position we are standing in,” he said. This thread moves into his creations as he looks to design for the twenty-first century global citizen who is at home everywhere because, as De Osu says, “Earth is home.” (Soon, New York City will be the brand’s home, as De Osu is moving here.)

Neo meaning always birthing the new, and Dandi meaning high style, De Osu is a true artist who creates from what is already created. “I’m continually recreating and recreating because that’s what creation is: transformation.”

Click on any image below to view the slideshow and larger images.

Growing up between New York and Paris, Juliette Donatelli developed a deep love for culture, style and the beat of the city. She's the founder of spades+siLK, where she writes about the exciting new trends fusing sustainability and fashion. She has lived in Los Angeles and San Francisco, but recently moved back to NYC to be part of all that is happening around local manufacturing and design. Juliette holds a MS in Ecology, and a BA in Globalization and Environmental Science. She is currently writing a book on sustainability in a material world. 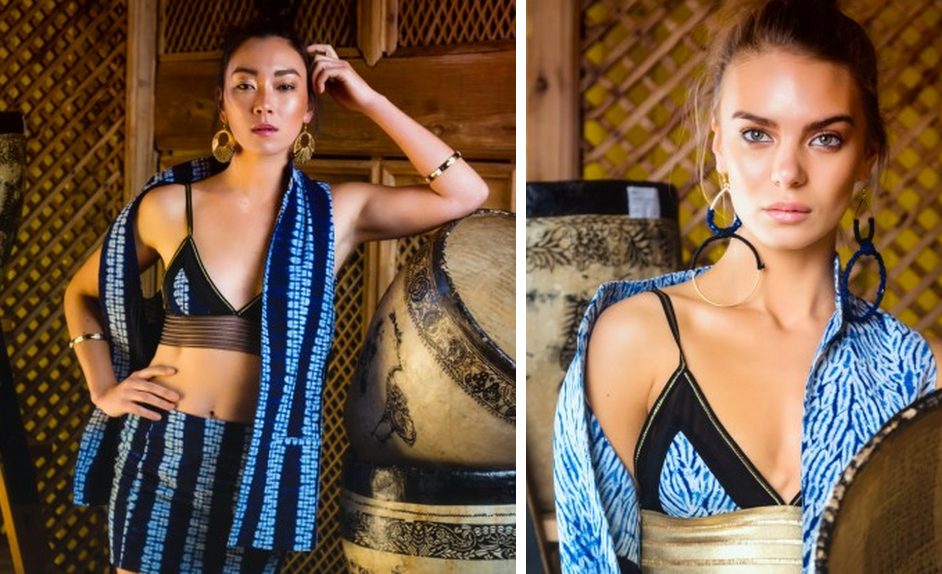 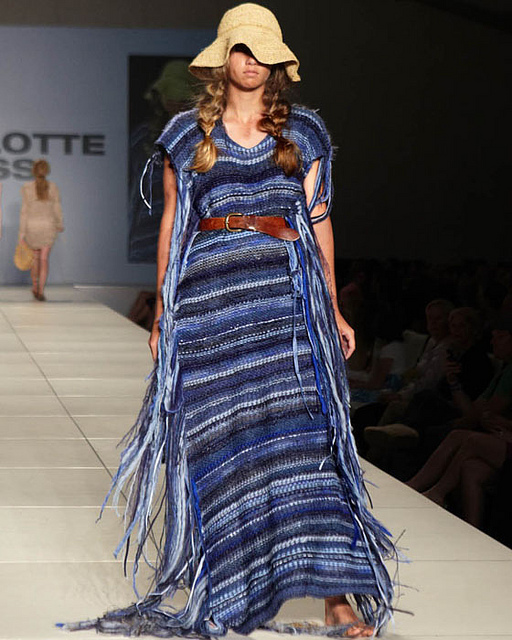 Isobel and Cleo: Next Level Knits Born in Nantucket, Made by Hand 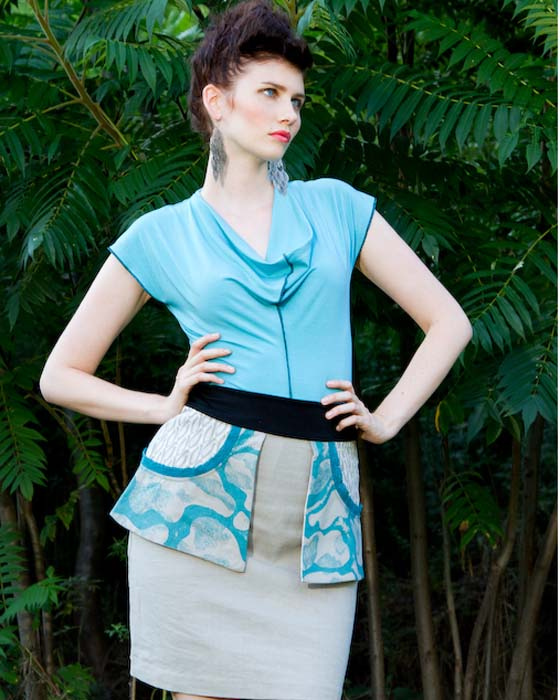