Model and Environmentalist Betcee May, and tireless Environmental Activist Remy Chevalier want to pull the plug on Indian Point, followed by Vermont Yankee and Millstone.

If you’ve been following Eco Chick for awhile, you will know that we are anti-nuclear power, even though there are some environmentalists who think that nukes are the answer to fighting CO2-belching coal plants which promote global warming. We are not one of them. (Here I use the royal we, you know, the editorial…)

Here on the East Coast, Indian Point is the worst of the worst. Even if you believe it has a perfect safety record, (which it emphatically doesn’t) it’s way too close to major population centers (like the most densely packed part of the country, including New York City) and would be a perfect terrorist target. I, along with other folks, including Remy Chevalier, are working to shut it down. Westchester, Rockland, and Putnam counties in New York state and Bergen county in New Jersey have all passed resolutions to shut the behomoth down, and numerous school boards, municipalities, labor groups and others have done the same. Eliot Spitzer, candidate for Governor in New York, promises to shut it down if he wins the race. 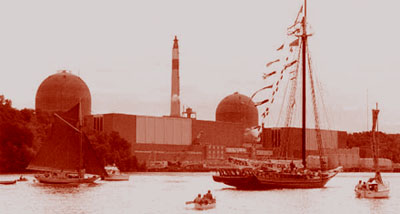 Clearwater and other boats doing the protest thing. Don’t you want to join in?

You can read more about the details in this article I wrote for the Fairfield County Weekly, as well as checking out Riverkeeper’s site, attending the Rock the Reactors event in November, or attending the sail/gathering organized by the Clearwater on the Hudson River (that means in a boat, either yours or on board the Clearwater) on August 27th to protest ongoing safety violations at the plant.

Your Pets on Green

How Good is Good Enough?