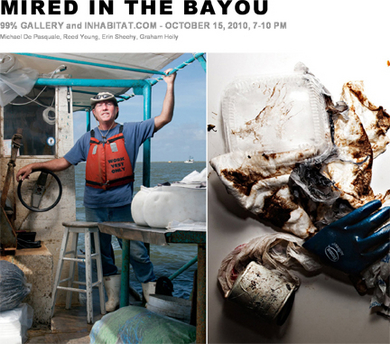 The BP oilspill is an unmitigated disaster, underestimated by everyone from British Petroleum to the United States government. The only group of people not downplaying its destruction and long-term effects are those living along the Gulf coast, who know that their beaches and waterways (and the animals and plants that live there too) will never be the same.

An upcoming exhibit explores one community, for which the BP oilspill is only the latest in a long line of deteriorating events, including foreign imports, rising fuel costs, the destruction of Hurricanes Ivan and Katrina, and overfishing. The exhibit includes various media, created after the artists ‘…traveled to the small fishing community of Bayou La Batre in July, 2010 to document the effects of the disaster. But rather than unveiling the narrative of a single tragedy, the three explore a community, which with time, has become well acquainted with catastrophe.’

October 15th Inhabitat with 99% Gallery will present ‘Mired in the Bayou’ a mixed-medium exhibit featuring the portraiture project of photographers Michael De Pasquale and Reed Young, with text and audio by journalist Erin Sheehy; and an installation by artist Graham Holly. Mired in the Bayou reveals not only the current situation of a place, but the history and dynamics of Bayou La Batre, a town now in despair.

Often tragedies, especially natural disasters, can seem to leave us outside the affected area with a sense of “shrug it off/what am I supposed to do?” feelings, often because of the enormity and diffuse and overpowering nature of the events. Connecting to individual stories and getting a sense of place enables us to both understand what has really happened in places like the Gulf Coast in the wake of the Deepwater Horizon incident.

Inhabitat presents: MIRED IN THE BAYOU from Jonathan Wing on Vimeo.

For more details and preview images of some of the exhibits, see Inhabitat.com’s coverage.