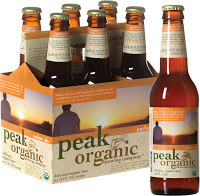 My husband and I are not big drinkers but recently we both wanted a beer. In trying to make our home and lives greener, we decided to try an organic beer. On a recommendation from a Whole Foods employee, we bought Peaks Organic Amber Ale. The beer was tasty and a great alternative to our favorite non-organic beer Sam Adams.

It got me thinking about spirits such as vodka and gin, which we only have in the house for guests. The first thing that always comes to mind when I think about how vodka is potatoes. Now I do not think that much of today’s vodka is make out of potatoes anymore but “hard” liquor is made out of some type of crop, a crop that is most likely over-farmed and covered with tons of pesticides degrading land and water.

Well in Wall Street Journal on May 15th, Joseph De Vila wrote an article entitled “Organic Liquor.” De Vila did a taste test of 3 organic vodkas and 1 organic gin. More important than his taste test is what Melkon Khosrovian, co-founder of distiller Modern Spirits, said in the piece about what is the point of drinking organic spirits. “It’s about sustainable farming,” he says, arguing that traditional farming involves pesticides and synthetic fertilizers, which can be harmful to farmers who come in contact with it and the ground used to grow the ingredients. “We would like to support farmers to move away from those processes,” Mr. Khosrovian says.

Both Smirdoff and Absolut vodkas are made from grain, but grain from industrial farms. Modern Spirits new TRU, certified organic vodka, is made from organic wheat. In addition, TRU comes in 100% recycled, recyclable or biodegradable packaging. And for every bottle sold, Modern Spirits plants new trees in tropical zones (where they are cut down in the greatest numbers) to pass on a better planet to the next generation of vodka drinkers.Now since I have not have the opportunity to taste any of Modern Spirits organic vodkas or the other brands mentioned by De Vila (Orange V Vodka, Rain Vodka, and Juniper Green Organic London Dry Gin), I cannot attest to the taste. But De Vila seemed to like them all. I hope to try them in the future.

Have any of you tasted them? I would love to hear what you think of organic beers and liquors.

You can read some of my past post by clicking here.