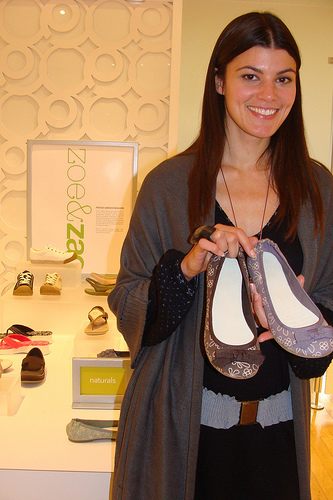 Summer showing off a cute pair of flats (close-up below)

I have to admit I was (pleasantly) surprised when I got an invite a couple weeks ago to check out Payless Shoes’ new green line, but when it comes to mainstream brands greenifying, I put my skeptics hat on. But I have to say I was pretty impressed. Considering how many shoes they sell (Collective Brands, which is made up of Stride-Rite and Payless combined, sells a whopping 200 million pairs a year) if these guys can do it right, it will make a huge difference.

Lucky for us, Payless is going to make these shoes as inexpensive as their other lines- none of the Zoe and Zac (green) line will be more than $30 a pair.

None other than eco chick Summer Rayne Oakes was at the Payless event to answer my questions- she’s the brand’s sustainability strategist for the new line, which will debut in April of 2009. “They have organic cotton bodies, the dyes are heavy-metal free, and all the metal details are nickel-free,” she said of the printed ballet flats, sneakers, flip-flops and espadrilles in the collection. Even the elastic band on one style is made from recycled PET. We also discussed adhesives, the material that makes up the foot beds and the soles, and without getting into all the chemistry specifics, I’ll just say that Summer and Payless covered a lot of the sustainability bases for the very first collection in their green line.

“We want to do a better job, as corporate citizens” said Mardi Larson, a spokesperson for Payless I met at the event. And when I told her about my concerns about the ‘ghettoization of green’ – that companies would make a green line to cater to the people that cared, leaving the rest of the public with the same old (Earth-disresepecting) stuff, she explained that what the company learns from the green shoe line will eventually be incorporated into all of their Payless products. “We want to democratize green,” said Mardi.

Another Eco-Chick in New York