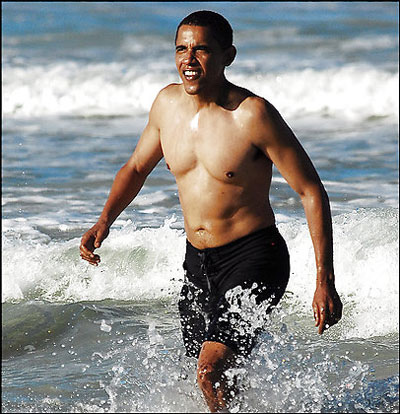 Mr. President, I know you’re originally from Hawaii, but that’s no excuse to waste fossil fuels keeping the Oval Office as warm as Honolulu!

Loved this piece in the NYTimes about our new President’s style; it’s kind of an intimate look at the day-to-day life of our new POTUS and how different from Bush he really is. I picked out a few clues from the piece about his eco-cred. Just like most Americans, he has started down the road to green, but has some issues to work on yet.

Yes, I do realize I’m a teensy bit obsessive about the planet, but hey, it’s the only one we’ve got, right? And isn’t this man going to be in charge of a huge chunk of it?

‘Nuf Said, Onto the Eco Crit!

Nay!
According to Times’ reporter Sheryl Gay Stolberg, “Obama’s senior adviser, David Axelrod, who occupies the small but strategically located office next door to his boss (says), “He likes it warm. You could grow orchids in there.”
-Obama keeps the temps toasty in the middle of winter, a big energy waster. My home office is kept at 62, which works just fine as long as I have a few layers on. Put on a sweater, Mr. President!

Yay!
Obama’s keeping a specially-commissioned rug that W. installed, but wants to get rid of some of W’s decorative plates. Barack says he’s not a ‘plates kind of guy’.
-The President is not hot-to-trot on redecorating the Oval Office, a perfect example of reducing consumption and reusing well-made pieces. You can sell those plates on Ebay or Craigslist to one of the last 100 Americans who thinks George W. was a great president, and use the cash for a couple new organic sweaters!

Nay!
Obama seems to eat quite a bit of meat. The Times reports: “For Mr. Obama, lunch generally means a cheeseburger, chicken or fish in his small dining room off the Oval Office.”
-Meat is the most energy- and water-intensive food you can eat. The United Nations Food and Agriculture Department reports that 18% of greenhouse gases come from meat and dairy production. Go veg at least half-time Mr. President, and you will save your heart, your colon, and the planet.

Yay!
Obama drinks organic tea- specifically his fridge is packed with Honest Tea (Hey, I love this stuff too!) in Black Forest Berry and Green Dragon flavors.
-Honest Tea works directly with farmers, making sure they receive a fair wage, and organic teas mean tea plantations (most commonly in China and India) aren’t drenched in pesticides and herbicides, many of which are banned in the US because they’re too hazardous, keeping local water and soil supplies clean for the people and animals who live there. And that means our President isn’t ingesting toxic chemicals in his drinks either, keeping him healthier.

Nay!
Obama STILL hasn’t committed to planting a Victory Garden at the White House.
-What better way to encourage Americans to grow their own food, embrace local produce AND teach Sasha and Malia the value of clean soil and solar energy than growing a garden! I mean, I know he’s been busy closing Guantanamo and all (a HUGE energy saver if there ever was one….and great for human rights too of course), but let’s get growing!

Yay!
Obama has a 30-second commute; he eats breakfast and dinner with his family and then heads downstairs to govern all day and half the evening.
-Telecommuting saves fossil fuels and money. The average person can save about $1700 a year and reduce their carbon footprint by working from home as often as possible. Plus you don’t have to dress up!