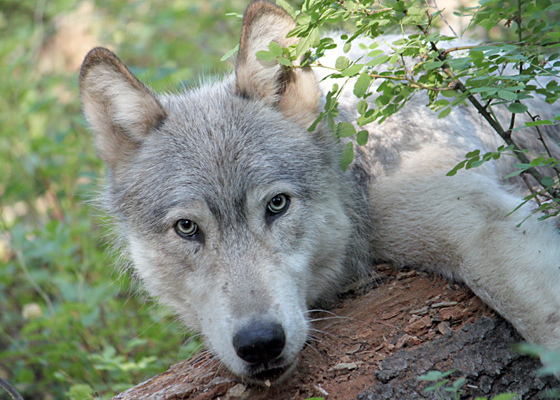 If there’s something that drives me totally crazy, it’s predator-killing. I believe that wolves, sharks, bears, mountain lions and other creatures that can eat us have the right to exist, even if they can be scary and maybe even devour our house cats (which is a huge bummer), or eat the animals we raise to eat for food. There are programs all over the USA that encourage killing these animals because 1. They scare us and 2. They eat some of our food (in the form of chickens, sheep and cows that some people eat). Eliminating an animal because we don’t like the way it behaves is like if I punched every loud mobile-phone talker who annoyed me. It’s not right, and it’s not fair.

So I was excited to hear that not only did Mountain Rose Herbs (a wonderful herbs/teas/body products company) recently host an awesome-sounding conference called Rootstalk with “over 40 experts and environmental groups who presented classes on sustainable
living, herbal medicine, wilderness skills, urban farming, and homesteading projects” to more than 700 people, but they gave all the proceeds from the conference to Cascadia Wildlands, which used the donation for a lawsuit to stop the State of Oregon from killing wolves in the Imnaha Pack, which is one of only three wolf packs in Oregon. According to their info, “The Oregon Court of Appeals has temporarily stopped plans to execute the wolves thanks to this legal action.”

What could be better than teaching people about sustainable living while simultaneous keeping wolves alive? I can’t think of much.

Think Rootstalk sounds awesome in and of itself? I do. Check out their Facebook page, and put next year’s gathering in your calendar now (August 29th – September 12th, 2013).