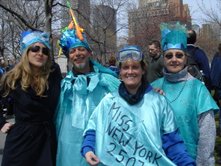 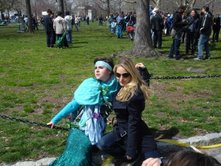 Yesterday I went to my first global warming rally, which was part of the Step It Up 2007 campaign (check out their page to see fun images from all over the United States). In Battery Park at the lower tip of Manhattan, I joined an estimated 1,200 fellow protesters to create a “Sea Of People,” (also the name of the local event).

Scientists warn sea levels could rise 10 feet or more, enough to flood Lower Manhattan and other low-lying coastal areas, which was the idea behind the placement of NYC’s event. In Battery Park I rallied along side some feisty protesters along with a plethora of people dressed as sea creatures, endangered species, and anything maritime-related you could think of.

Manhattan’s Sea of People was just one of 1,400 plus other events across all 50 states, which were part of the Step It Up Campaign to convince Congress to reduce heat-trapping carbon emissions by 80% by 2050. The campaign was created by Middlebury (VT) students, professors, and environmentalist Bill McKibben, author of the 1989 book on global warming, The End of Nature.

Wind to Light in London