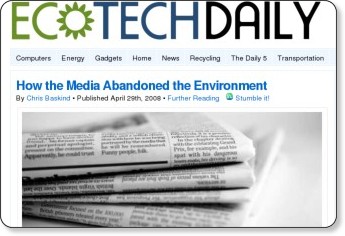 How The Media Abandoned the Environment, at new techie-with-a-heart-of-green EcoTechDaily.

Check Chris Baskind’s op/ed on the lack of environmental coverage in mainstream media:

No, you’re not imagining things.

With U.S. gasoline prices edging toward $4.00 a gallon; oil prices at an all-time high, demand for materials such as copper outstripping demand; worldwide food shortages; major cities running short on water; Antarctic ice sheets crumbling into the Southern Ocean; and continued uncertainty over our climatological future, you’d think the environment would be front-and-center on the evening news. And you’d be wrong.

14 New Species Discovered in Brazil, from The Daily Green

Dan Shapely reports that there are indeed new things under the sun (at least to humans). Check the gorg flipbook!:

….at the top of the Serra Geral in Brazil’s Cerrado region, where 14 new species have been discovered during an expedition to the wooded savanna. 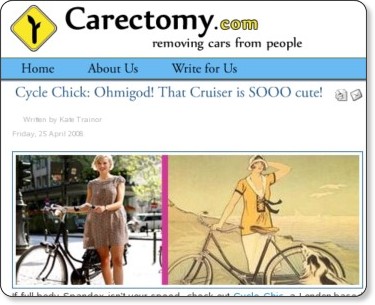 Another new Bike Chic page (I keep writing about this subject; check it here and here) and Carectomy has found another one!

If full body Spandex isn’t your speed, check out Cycle Chic, a London-based blog that offers tips on how to look devastatingly hot (wear designer pants from Stella McCartney, or your boyfriend’s t-shirt), stay sweat-free (don’t go too fast and sport a light, summery dress), and “cycle yourself slim,” all while biking to your intended destination.

Give it Away Now