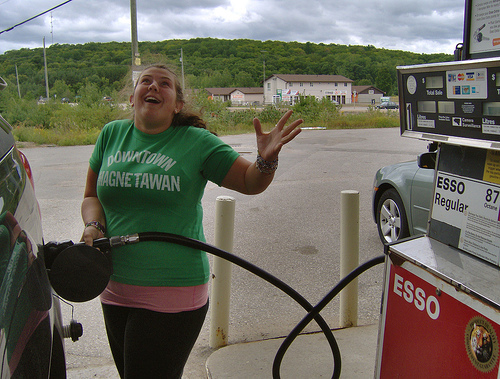 Thanks to Flickr user Emutree for this great image!

When I first started driving 15 years ago, I had it out for Exxon. I had seen the oil-covered birds from the Valdez oil spill in Alaska and had cried for the sad-eyed seals who were hosed down by volunteers. For years — at least a decade — I refused to buy gas at Exxon and would ask my friends to indulge my boycott, especially when Exxon dragged it’s feet cleaning up. I was voting with my dollars, dammit.

And then I went to college and figured out that ALL the oil companies were evil, what with lobbying against CAFE standards (if we had stuck by CAFE, we wouldn’t need foreign oil today), not to mention the really crappy coffee at their associated convenience stores. And then Exxon merged with Mobil. So I gave up my boycott eventually, stopped at an Exxon if it was convenient, and boycotted lots (and lots) of other things.

And then came those interminable, spam emails about how we should all get together and not buy gas and that would really show those oil companies who’s boss! (These are all false and this scheme will never work). But there seemed to be no point. The oil companies had us addicted and it didn’t matter who we bought our crack-gas from!

Well, it turns out it does. While I’m 100% behind the idea of getting rid of personal cars altogether, like those happy biking Germans, or of running ALL cars on non-fossil fuel alternatives by 2030 (as Sweden built into their recent energy and climate bill), the thing is, these initiatives will take time. (In the meantime, you can at least bike to work!). And I’m impatient. I want to do something now (I can’t bike to work, I work at home!

Well, I’m going back to voting with my dollars. Turns out there’s a significant difference in how environmentally-friendly (or not) the oil companies are, and why shouldn’t that info impact my decision about where to spend my money (on gas and snacks, and, yes, maybe even some bad coffee) this summer? The research team at Greenopia spent weeks digging into sustainability reports, oil spill data and alternative energy initiatives, ranking the top 10 oil companies for their Earth-friendlier initiatives.

I’m back to shunning Exxon & Mobil, as they are still up to their climate-screwing ways. And they’re sixth on Greenopia’s list; I would prefer to buy from one of the top three oil companies, who are at least LESS evil.

1. British Petroleum (BP) ranked number one for sustainability among oil companies. Why? It has one of the most transparent and complete sustainability reports, but most importantly, it’s taking its slogan, “Beyond Petroleum” seriously. “BP supports and is pursuing development of solar, wind, hydrogen, and biofuel technologies. BP has pledged spending of $8 billion dollars towards renewable over the next few years, making it one of the biggest renewable donors in the world. BP is also progressive in its stance on climate change and publicly admits its merits and is acting to improve its own internal performance," writes Greenopia research director Doug Mazeffa in his report on BP.  Though BP isn’t as bullish as it once was on alternative energy, they’re doing better than the rest.

2. Sunoco came in at number two in Greenopia’s research. The company not only has excellent environmental reporting (the best of the bunch, where they disclose the good AND the bad), but they have extremely efficient practices in order to conserve water and reduce waste." Sunoco has been an industry leader in its efforts in Biofuels and other clean fuels and has a proactive stance on climate change," according to the Greenopia report.

3. Shell was ranked number three, according to Greenopia’s research. Shell has made serious investment in renewable resources, and, according to the report, "Shell has shown steady improvement in its greenhouse gas emissions (down to 92 million tons in 2007). When normalized to revenue, Shell has one of lowest emissions per dollar earned. Shell has also shown steady improvements in the number of spills each year and also the amount of water it consumes." Unfortunately, Shell also produces much more hazardous waste than other oil companies, and had a whopping 820 oil spills last year, which gave it a lower overall score.

Check out the rest of the Top Ten in the report at Greenopia, along with more details about each company and their rankings.

To clarify, nobody is saying there’s such a thing as “green” oil or gas here. “Fossil fuels are pretty much at the top of any environmentalist’s black list,” said Doug Mazeffa, Director of Research at Greenopia. “But until alternative-fuel coalesces into large-scale market availability, cars are a vast and current fact of life and they are powered by refined crude oil.”