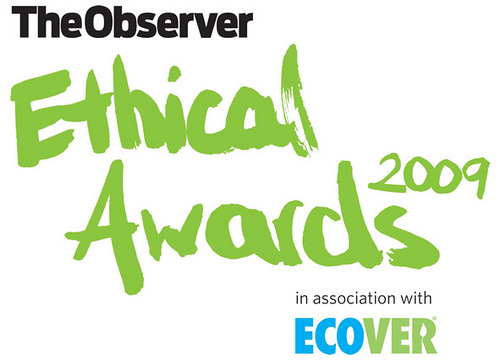 The shortlist for the fourth annual Observer Ethical Awards, in association with Ecover, is announced. Last year’s awards saw Divine Chocolate scoop Ethical Business of the Year, Hugh Fearnley-Whittingstall Celebrity Campaigner of the Year and Ken Livingstone Politician of the Year. Thousands of entries have now been whittled down to 33 shortlist nominees. Why the Ethical Awards?

Ethical issues have been variously pitched as cool, transformed, rebranded and even normal (praise indeed given their former tie-dye/wind-chime hugging roots). This is all absolutely valid, but for our fourth awards, I’d like to pitch the ethical outlook as being simply vital.

Inevitably, given the current fiscal climate (politely described as “challenging”), some leaders and big businesses will try to weasel out of environmental and social justice commitment or scale back previously “ambitious” plans to become low carbon. If you like, this is the opposite of greenwashing but just as pernicious.

The best defence against such weaseling, when commitment to a better planet is more important than ever, is mass engagement and enthusiasm for new and better ideas, campaigners and their projects. And the Observer Ethical Awards are all about enthusiasm. Each year this is reflected in the fact that you vote in your thousands for the people and ideas you think make a real difference.

The entrants were judged by a combination of reader votes and by a celebrity panel that included; Jo Wood, Ben Okri, Rick Edwards and Deborah Meaden. The winners will be announced at an awards ceremony in London on Wednesday 3 June.

The Observer Ethical Awards are instrumental in bringing green issues to the forefront of consumer minds and making businesses reassess their attitudes towards sustainability. The awards recognise those who pioneer a sustainable future and identify products, ideas and companies that make ethical living possible.

For the full shortlist or more information on the Observer Ethical Awards, check this page out.

Vertical Gardens Feed and Beautify Cities of the Future: Existing and Planned

Eco Lingerie for Every Bella