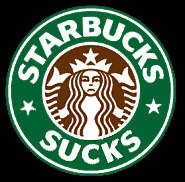 Full Disclosure: About once a week I go to Starbucks. I hide my head in shame (hey, I protested Starbucks putting locals out of business in the 90’s) and stand on line for a soy latte. I work and attend grad school in Manhattan, and Starbucks are everywhere AND they always have Silk (sometimes organic but at least GMO-free) soymilk, a necessity for me since I haven’t drunk cow’s milk in god knows how long. And if you’ve been a student, (not to mention a way more than full-time blogger/freelancer/editor), you can relate to my need for caffeine! If given the option, I’ll go to a local coffee place- even go out of my way for one, but sometimes they can be hard to find.

So, my following rant has some substance to it, as a semi-regular customer of the ubiquitous chain (and yes, yes, I’m a bit of a hypocrite. I admit it, so sue me! I swear I never went there until I became a workoholic). But I write this as a real, regular customer, which I think gives it some weight. Here’s my suggestion, since Starbucks has been losing customers recently: Bring back the Mug!

On this entire continent called Europe, you go into any espresso bar or cappucino cafe and if you choose to stay, you get a real mug, teacup or espresso shot receptacle from which to quaff your java fix. And every Starbucks I’ve ever been to has the tables, and seems to encourage people to sit down, but why do those people all have takeaway cups? Paper cup and hot cup protector thingy (recycled, good), plastic top, all of which could be completely done away with if denizens drank from real mugs that could be washed and reused a thousand times. Of course, if you’re getting your coffee to go, you need to use a disposable (unless you have a refillable coffee mug to use of course- but Starbucks has trouble even dealing with these.)

If you’re going to sit down at a coffeehop, you shouldn’t be using a disposable cup. It’s wasteful, and frankly, uncivilized. Drinking out of a proper cup is a more relaxing experience, and reminds us that disposable items should not be an expectation, they should be a convenience, an exception. We should be using disposable ONLY when we really need them, period.

Just imagine where that cup started.

A tree, and bucket of crude extracted from the ground. Some of the oil goes to make the plastic tops on the cups. A tree was grown, felled and processed into the cup (along with some post-consumer recycled paper). Try picturing all the energy it takes to chop down the trees and collect and recycle the paper, then the machines that manufacture the paper cups, and the gas used to transport them to a zillion Starbucks, all for 20 minutes of use before they are tossed in the garbage and then add to our landfills, or end up in the environment. Think of all the plastic coffee tops and where they end up (plastic doesn’t really biodegrade, or won’t for thousands and thousands of years).

According to this article, tons (literally) of plastic blows out into the ocean into “the eye of the North Pacific subtropical gyre, where opposing ocean currents form a vortex bigger than Australia, trapping tons of floating debris in its circular flow”.

Trash that wound up there used to decompose. Now, with 403 billion pounds of plastic produced annually, according to the Houston-based consulting group Chemical Markets Associates Inc., areas of the gyre have turned into a soup of indigestible shards that can break down to the size of plankton and be mistaken for food, endangering millions of fish and birds.

“No matter where we go, we find plastic,” said Moore, 60. “The ocean is now this plastic soup, and we just don’t know what that’s doing.”

Marine debris worldwide kills more than 1 million sea birds and 100,000 mammals each year, according to the U.S. National Oceanic and Atmospheric Association.

After you’ve commented on the cup issue here, you can also add in something about those stupid sizing system. My friend Michael, who alerted me to this campaign (thanks!) and wrote several vociferous comments about the insistence on throw-away only, also had this to say:

And ask them to spare us from that venti, grande bullshit. It’s polluting our language. What’s wrong with small, medium and my favorite – grande pompino? (ask your Italian friends for a translation).

Oh, and if I’m going to be paying through the nose for a shot of damn espresso, why the hell isn’t it organic and fair-trade? What are we paying for anyway? Too many freebie cups may be the answer.