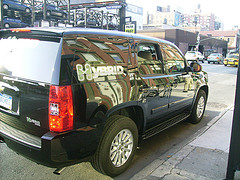 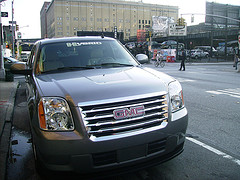 I was embarrassed. There’s no other way to describe how a green, treehugging, environmental blogger such as myself felt clambering into a Chevy Tahoe outside a restaurant on the West Side of Manhattan recently. This ‘full-size’ (read that as gigantically huge) SUV was a hybrid, true, but its slightly lower emissions did nothing for the fact that driving one of these things through New York City streets makes you feel like a road hog, no matter how obsequiously you try to maneuver. Not to mention the flit of panic that cruised across my brain as I thought about parallel parking it (but no matter, it would hardly fit in a parking space on the street anyway). And be not fooled: I have city-driving skills. I’ve been driving in Manhattan since I was 17 (that’s 13 years of competing with taxis, avoiding pedestrians, and lots and lots of street parking).

I was ensconced in the driver’s seat of the not-yet-released hybrid Tahoe because GM invited me. I’ve been writing about how to live sustainably for years now, and I thought that despite my lack of love for SUVs, I should go and try one of the hybrid models out. I’ve driven my friend’s Prius quite a few times, so I know how hybrid engines handle, and I wanted to compare. The hybrid Tahoe is similar to the Prius in that also shuts the engine off at stops, utilizes braking energy to recharge the battery, and runs on battery-only at low speeds, all of which save gas. As soon as the foot hits the pedal, it’s go time, with nary a lag, in the Prius, anyway. Except that this time I was driving a super-sized vehicle, so it still took awhile to get 5,500+ pounds going. 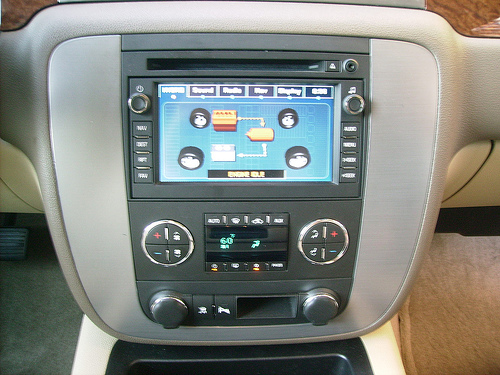 This is the gps thing that also shows you how your car works, in case you’ve bought a hybrid without really understanding what it is (which I’m sure will happen)! But also nice to have a visual to show your friends and family while explaining how your crazy newfangled truck works.

While I was busy praying that nobody I knew saw me driving the Tahoe through the already-congested streets (I realized that I was taking up the space two cars could drive in!), my lovely guide, Mary Sipes from GM, was telling me about how this car was mainly sold to women, who either buy or influence about 85 percent of car-buying decisions. I realized with a depressing thought that us ladies were probably responsible for the whole SUV craze. Because we want to feel safe, and most importantly, we want our children to be safe (even though SUVs, with their high rollover rates, and poor rear-crash protection stats are anything but safer for kids). Still, many people still think that driving the biggest behemoth on the road is smart, ignoring completely what that means to the safety of other drivers when you crash into them.

I am especially sensitive to this last point. I drive a 1997 Saab 900, which is a smallish, zippy car (with not-that-great gas mileage, yes I know! I make up for it by not driving much, as I ride my bike and take the train 80 percent of the time). About six weeks ago, a woman in a glowing gold Cadillac Escalade backed into my parked Saab while I was waiting on line for gas (the irony does NOT escape me here). She was going about five miles an hour and totaled the driver’s side of my car with her bumper. When she hopped out (she was the solo occupant, natch) she apologized profusely, exclaiming that, “The sensor is supposed to tell me when I’m going to hit something behind me!” I guess looking over her shoulder was too much trouble, but it taught me an important lesson: you don’t want to be in an accident with a large SUV. There’s the weight differential, which automatically puts a smaller car at a disadvantage no matter what, and then there’s the fact that her bumper was just about level with my chest as she backed towards me.

It was a scary and sobering experience. The stats back me up. According to a 2005 report by the Insurance Institute for Highway Safety that looked specifically at crashes between cars and SUVs, “The car occupant death rates went up as the weights of the SUVs and four-door cars went up, but the increase by weight was much steeper when the collision was with an SUV.” And this from a 2002 Washington Monthly article, “When a car is hit from the side by another car, the victim is 6.6 times as likely to die as the aggressor. But if the aggressor is an SUV, the car driver’s relative chance of dying rises 30 to 1.” To feel safe did I need to be driving a huge SUV too? Were our highways now turning into an SUV arms race? You aren’t safe unless you have the biggest truck? But still the number of truck accidents every year is alarming.

Ms. Sipes told me that there is now what GM calls vehicle-to-vehicle compensation in the new 2007 and 2008 hybrid versions of the Tahoe and Yukon, which is, “Three brackets, mounted to the frame, which manages energy in collisions with smaller vehicles. It’s really simple.” Too bad they didn’t add those earlier; they could’ve saved some lives.

Back at my test drive, I noticed I had to stop much more often since I couldn’t wiggle through spots I would have been able to in my Saab, which made it slow-going. It reminded me of the news article I read that stipulated that the popularity of SUVs was increasing congestion especially in suburban areas, since fewer of the larger vehicles could make it through an intersection in a given amount of time (3-4 SUVs could go through a light in the time it took 5-6 cars).

But onto the main reason I was here. Ms. Sipes was telling me that the fuel economy in the city for the new Tahoe and Yukon (same car, different styling), was 40 percent higher in the city, 25 percent higher on the highway, with the hybrid engine. Which is good news since the non-hybrid version only gets about 13-15 mpg in real-world city driving conditions (up to 20 mpg highway driving). 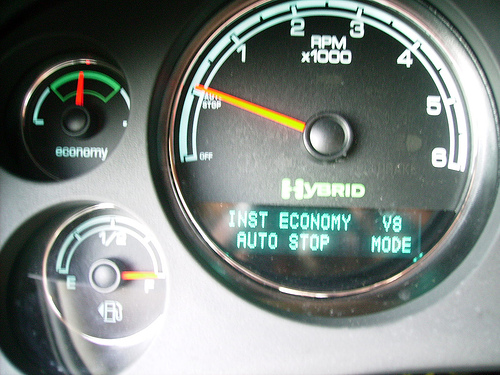 The little gauge at the upper left tells the driver if she’s driving economically or not. Hard braking and crazy acceleration will take you out of the ‘green zone’.

While I suppose it’s a step in the right direction to put a hybrid engine in a gas-guzzler, I couldn’t help reflecting on the history of the American auto industry, which has vehemently fought fuel-economy standards since the oil crisis of the 1970’s passed us by, leading to the pathetic fact that overall, cars and trucks miles per gallon efficiency has flatlined in recent years. There was a fuel-economy bill that was filibustered by the Senate in 1991 that would have raised standards by 40 percent over a decade. If adopted, we would now be saving over a million barrels of oil a day (not to mention taking a chunk of CO2 out of the global warming equation). Why was it fought so hard in the Senate? Because Ford and GM thought it would affect their profits. It is exactly this lack of foresight that has caused the American car companies to lose market share. To their new Tahoe and Yukon hybrids, I say, too little, too late.

At this point in the climate-control game, hybrids, especially on such large fuel-suckers, are a feel-good choice for soccer moms, not a serious solution. What we need now is cars that run on batteries that we can charge up at night from our solar panel, wind turbine, microhydro system or even coal-burning power plant (still cleaner than burning fossil fuels in an internal combustion engine, according to this information.

Good thing GM’s working on the Chevy Volt. Now that’s a car I can get behind without embarrassment, and it looks like it’ll even fit in the streets of New York. 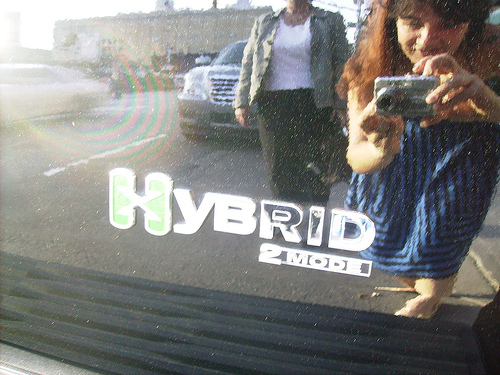 This puppy’s got hybrid decals all over it but it’s promotional only. The final model will have three slightly less obnoxious silver tags on various parts of the truck, because as Mary Sipes said, “Hybrid drivers want other people to know they’re driving a hybrid.”

Article reprinted with permission from The Huffington Post. Images by Starre Vartan for Eco Chick.

That Boy Gots Balls of Steel