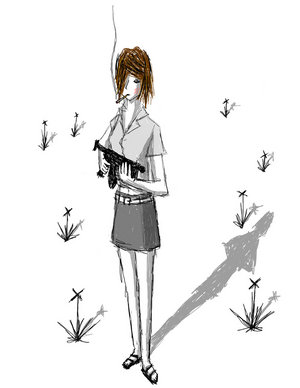 While, admittedly, there was a brief time I smoked cigarettes regularly (hey, I was living in Spain, give me a break), I’ve always found it EXTREMELY maddening that not only do smokers foul the air, but they toss their butts all over the damn place. I live next to the Long Island Sound, and there’s nothing more disgusting than digging a hole with your feet in the sun-warmed beach sand and finding a cache of used butts.

Hey, I understand, you smokers are addicted. Fine, I know you can barely smoke anywhere now anyway, and I feel for you, or I would if you weren’t such damn slobs about the whole thing. My good friend Danielle loves her a cig, but never litters them – she keeps a small portable ashtray (check this one out from Butts and Gum) or finds a trash can. I applaud her, and all the smokers who roll their own or dispose of their butts in a way that keeps birds and marine mammals from eating them, or going into the sewer, or polluting the Earth (cigararettes, we all know, have a host of toxic chemicals in them. Not so good for your body, but also, those chemicals get concentrated in the butts, and when you litter them, that nastiness gets in the soil and water-ugh!)

Horrifyingly enough, since everyone is smoking outside now, the environmental toll of smoking has increased, because people are throwing more butts around the streets and outdoor areas, instead of ashtrays, according to this commentary on E Magazine’s weekly newsletter. Here’s the disturbing info:

The paper and tobacco of cigarette butts may be biodegradable, but the filters are not, and persist in the environment as long as other forms of plastic. These filters are composed of a bundle of 12,000 cellulose acetate fibers and are reported to take between 18 months and 10 years to decompose, depending on the environment they’re in. Once decomposed, they remain chemically present in the environment, as they contain up to 4,000 chemicals including hydrogen, cyanide and arsenic. Toxological data has shown that chemicals from discarded cigarette butts are capable of leaching into surrounding waterways. One particular problem is that these leached chemicals are deadly to the water flea Daphnia magna, a small crustacean at the lower end of, but crucial to, the aquatic food chain.

The saddest environmental impact of cigarette butts is their role in the deaths of thousands of marine mammals and birds every year. These wild creatures mistake the butts for food. Once ingested, the butts can lead to starvation or malnutrition if they block the intestinal track, and can also prevent breathing by blocking vital air passages. In 2003, the United Nations International Maritime Organization reported that cigarette litter adversely affected 177 species of marine animals and 111 species of seabirds through ingestion.

And if you must smoke, try rolling your own- you’ll smoke less and without a filter there’s not so much waste. Or perhaps you can try those portable vaporizers. A lot of my friends say that it’s a very nice way to take baby steps to quit smoking until you kick out the habit (Want to start vaping? – Go to http://www.davincivaporizer.com to learn more). It’s a healthier option too and many observed that it’s actually a cost-effective alternative. Bottom line is, you need to start on the path of quitting.