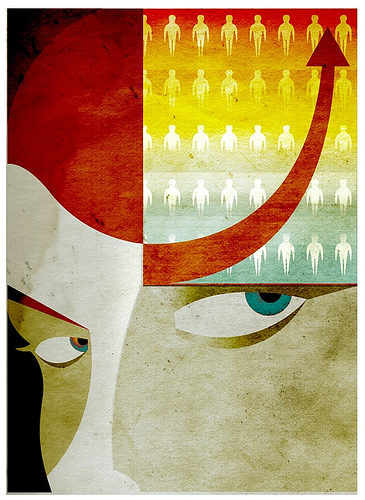 This month, one of E/ The Environmental Magazine’s feature stories is about the the myth of the population dearth, the idea that we’re not replacing ourselves at quite the rate we have during the heights of human population growth, which occurred in the 1960’s. The doom and gloom predictions of economists that there won’t be enough young people to sustain economies in the future might have families considering a 3rd or 4th child. But look at the statistics and you’ll see that the Earth’s population is still zooming straight up. While it’s true that most of that growth is coming from people in developing nations, everyone plays a part:

Americans, especially, are a more significant part of the continued population growth than people in most other Western nations. I’m sure you all saw the heralding of the 300 millionth American a few weeks ago, and it won’t be long before we get to 400 million:

The U.S. is the only industrialized nation with significant population growth, and a new report sees those burgeoning numbers as a factor in our unparalleled impact on the environment.

While Europe shrinks, U.S. population grows by just under one percent a year, which translates to 8,000 people a day, or three million per year. The 300 millionth American will either be born here (or move here) sometime this fall. According to Victoria Markham, executive director of the Connecticut-based Center for Environment and Population (CEP), the growth is magnified by a very high rate of resource consumption. “The U.S. has the largest per-capita environmental impact in the world,” she says, “not only in terms of resource use, but also the pollution and waste associated with it.”

The U.S. uses three times more water than the world average per capita, and (despite being only five percent of world population) consumes a quarter of its energy. Americans buy and use a lot of stuff, Markham says, but there’s more to it than that. Baby boomers, despite their relatively high level of environmental awareness, are also enjoying an unprecedented amount of wealth, living in larger houses on more land than any other generation in U.S. history. What’s more, she says, the nation’s number of households is also increasing dramatically as families fragment. (Average household size dropped from 3.1 persons in 1970 to 2.6 in 2000, according to U.S. Census figures.)

For us all to live as healthfully as we can, while still leaving places for nature to be nature, there have to be fewer people. This is the only way I can see for human beings to continue into the future without using up all the resources on Earth. And I’m not talking about cutting population in developing countries (though I’m certainly not opposed to supporting birth control and family planning for those places), but starting at home. The only people you can really change are you and your friends and family.

You’re not just using a lifetime’s worth of resources when you have a baby in this country, you are using an American’s lifetime’s worth of resources. Think about that, and your one baby might as well be triplets. I’m not suggesting that we legislate the number of children people have, but I think we should question this whole idea that it’s ‘OK’ or responsible in some way to have 2 or 3 kids. Because when those 2 or 3 children are Americans, they will be consuming much more than their peers throughout the rest of the world.

Just think, a world with fewer children will mean better schools and teachers for those that are here, less competition to get into college and find jobs, and less of a necessity for us all to live in crowded urban conditions that foster disconnection with nature. I know this is not a ‘popular’ opinion, and I understand this is an emotional question, but I think that anytime one is thinking about how one can consume less over a lifetime, the concept of not creating any more people has to be discussed. If you like kids, adoption is an amazing way to save a child’s life.

One of the reasons I feel so strongly about the concept of population decline is that I grew up in a small town of fewer than 5,000 people, and my time there founded my environmentalism. I spent so much time outside, exploring the acres of woods and wetlands surrounding my home that I developed a keen relationship with the natural world at a young age. As I got older, I rode my bike on miles of dirt roads, wending my way among small farms, lakes, swamps and up and down innumerable hills to get to my friends’ houses. There were few cars on the roads I travelled, even the ones that were paved.

I’ve noticed that most (not all!) of the people who I’ve met who have an intense and unwavering respect and adoration of nature’s variety have grown up in rural areas. I don’t think this is a coincidence. While I long to still live in the idyllic environments of my youth, I realize that it is far less harmful to live in an area that is already developed, and to live close to other people, sharing resources and using public transportation. The town I live in now has about 83,000 people and it makes sense to have buses and trains, sewers and schools for us all to share. But I see far fewer trees, stars and I hear and see people constantly. I am most certainly less in touch with the seasons, I haven’t met an undomesticated animal in months, and I’ve forgotten the names of trees that I haven’t seen in ages.

But I live here because we’ve all heard the facts and figures about how much more eco-friendly city dwellers are; in a responsibly-run city, individual impact can be lowered even more. But this brings me to a question; what about kids growing up in cities? Is the average city kid going to be in touch with a natural world they have little chance to come in contact with? (I’m not meaning to disparage city kids here, or urban parks, which are great outlets and learning experiences, but there is nothing like being completely enveloped in non-human made environments).

So, if the human population continues to grow at it’s present rates, we can’t all enjoy the rural lifestyle where we can learn nature’s rhythms first-hand. We need, for the sake of keeping any vestige of open space, to live in cities, or densely populated suburbs, which are not the best places to learn from nature. Live in cities and have less contact with nature, but have less impact on it or reduce the number of people over time so that there’s room for people to live in rural places and there’s space for intact ecosystems to thrive. I know which one I choose.

Barefoot Walking and Running: Best of Both Worlds with Vivo Barefoot Sneakers