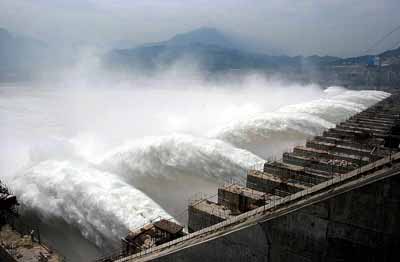 Within the last 24 hours, the final temporary retaining wall that held water intended for the Three Gorges Dam project was destroyed in order that the water may enter and discharge through the dam. Three Gorges Dam is on.  This is the largest dam ever constructed in the world and is surrounded by controversy from groups concerned with the environment, human rights, and history/archeological. Construction of this monstrosity began in 1993 and was officially completed in May 2006, 13 (lucky) years. The government of China, unmoved by international appeal to the contrary, went ahead with the project and displaced over one million people. The construction was possible in part by funding from countries including the United States, Canada, and Germany. Exact numbers are not known, but the total cost exceeds $25 billion dollars and may be as much as $100 billion. The dam is located on the Yangste River, stretches 1.3 miles and is just over 610 feet high. The hydropower generation will not be fully functional until 2009, but is expected to generate 18,000 megawatts of electricity.

Goin' Nuts for the Palma Collection

“We want to protect our lands, but we also need to awaken the people in The North. You are living in a dream, what you are doing is destroying the Earth.”