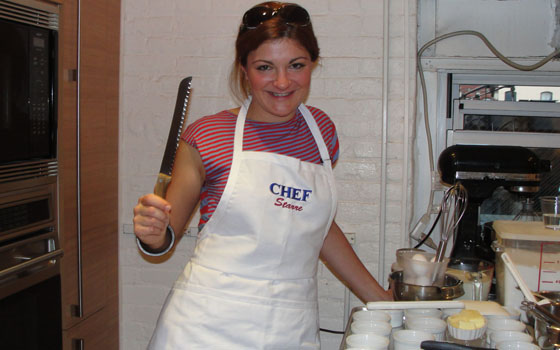 See, I’m putting in serious effort at learning to cook! 🙂

My love of food comes from three main sources; one primal, one inculcated, the third learned as an adult. First, my natural appetite for delicious, healthy meals and snacks is fairly well-known (I think I can count on one hand the times in my life when I wasn’t hungry!), and I can eat absolutely anything, with no known food allergies or sensitivities.

Second, my grandma raised me on garden-fresh produce and a combo of Lebanese (hummous, tabouli and pilaf being staples), Armenian that she learned from her mother-in-law as a young wife (green bean and local beef stews, lentil dishes, chee kufta), Jewish (picked up through osmosis as she grew up in NYC- she made a killer matzoh ball soup for an Episcopalian!) and American food from the Joy of Cooking and the Settlement Cookbook (written in 1901 and hilariously subtitled “The Way to a Man’s Heart”). Grams was a legendary cook, and I was lucky to grow up in a home where 90% of what I ate was made from scratch (we even had our own apiary for the freshest of honey, and eggs from the chickens that roamed the woods between our house and our neighbors’. And homemade bread!).

Third, for three years, I wrote about food for The Fairfield County Weekly, a job that gave me a culinary education in my twenties I couldn’t have paid for. (Actually, I paid for it as I gained about 15 pounds during my tenure at that job! But honestly, it was kinda worth it.) I got to eat at pretty much every restaurant in Fairfield County, which is in Connecticut just north of New York City, and has a very rich combination of predominantly Italian and Greek cuisines, which has been supplemented more recently by excellent Indian and Asian, and in the last 5-7 years wonderful raw, vegetarian and health foods.

But truth be told, I’m not the world’s most accomplished cook, though I can put together a beautifully-sourced, complementary tableaux of appetizers. But when it comes to cooking a ‘real’ meal, my only saving grace is those great ingredients and some talent with baking pies and cookies (so at least I end on a good note!). The last few years, however, I’ve made a slow and determined march forward in teaching myself to cook, and recently have been enjoying the books below. While I’ve been vegetarian for 17 years, both these books are great for veg and non-veg alike (I use them regularly without problem, but there are plenty of meaty dishes in each too). What unites the two tomes is that they focus on local, healthy, seasonal, whole foods cooking, which I am naturally drawn to as it’s what I was raised on. 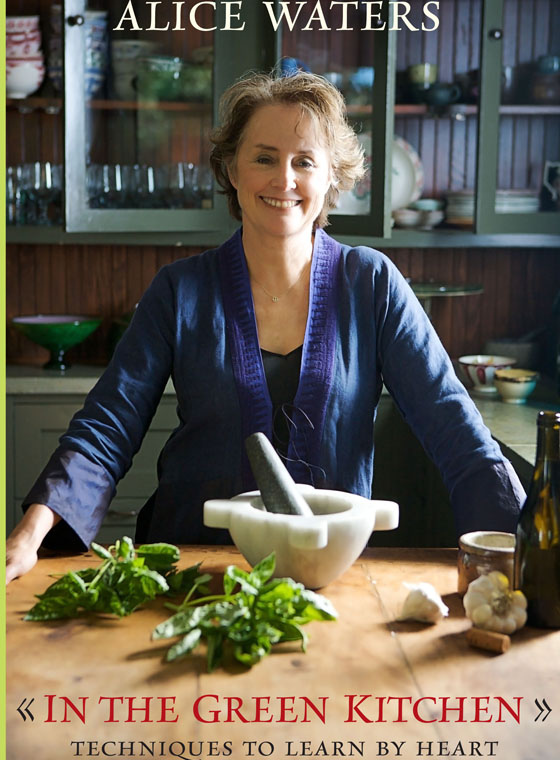 In the Green Kitchen, by Alice Waters

This is not a traditional cookbook, though it does contain plenty of recipes. But instead of simply a compendium of delicious food combinations, this book focuses on what kitchen pioneer Alice Waters (of Chez Panisse restaurant and Edible Schoolyard fame) has realized was missing from the aspiring conscious chef’s shelf: A technique-driven, full-of-instructions volume that includes how to’s from the prosaic to the intimidating.

Beginning with washing lettuce and dressing a salad, through making bread, to poaching an egg, blanching greens, pickling vegetables and filleting a fish, and onto baking fruit, the instructions here are based on recipes (the bread baking chapter includes general instruction, as well as specifics for creating soda bread, buttermilk biscuits and a no-knead loaf), which is perfect for someone like me who learned some basics but not others – or only half remembers what my grandma taught me ages ago.

Gorgeously designed and photographed, I’ve given myself the challenge of working through most of the 28 chapters (excising the meaty ones like grilling a steak and roasting a chicken). I feel like I’ll come out the other side with a much more solid knowledge of food processing and a few new recipes to work into my retinue too.

“Proceeds from the book benefit the Chez Panisse Foundation in support of Edible Education – a national movement to change the way children eat and and how they learn about food in the public schools.”

And now it’s a TV series! You can see the first episode here, featuring Alice Waters and her daughter, Fanny Singer. 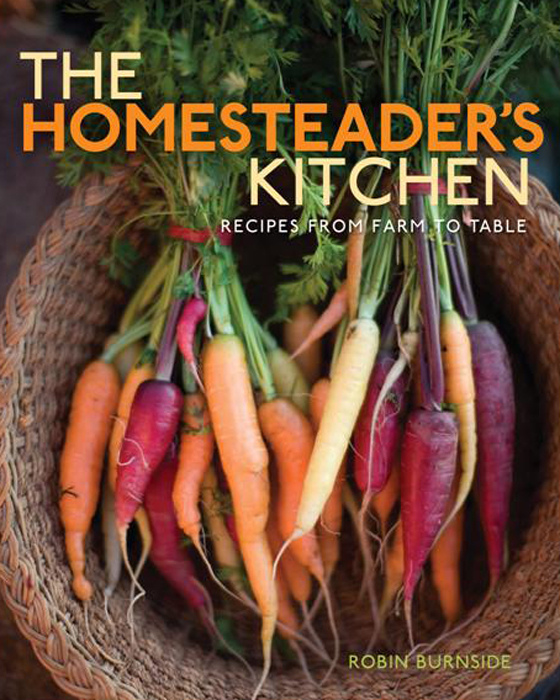 The Homesteader’s Kitchen, by Robin Burnside

One of the first sentences in Burnside’s book really resonated with me: “The very act of making a meal from scratch fills an ancient need in us that cannot be met with even the tastiest store-bought products. We miss that primal process of making food; the creativity and attention it demands, the delightful alchemy of ingredients coming together to form so much more than the sum of their parts.”

Burnside was also heavily influenced by her grandmothers- Italian on one side, a professional caterer/chef on the other. She went on to open her own specialty cheesecake bakery in Monterey, California, which eventually blossomed into the Carmel Cafe, and then following a move to Big Sur, opened the famous Cafe Amphora at Nepenthe, right on the bluffs overlooking the Pacific. Finally, Burnside worked at the Esalen Institute, feeding the staff and attendees from the huge gardens there. Despite her serious cred in the natural foods movement, Burnside is incredibly encouraging towards those of us who are starting from scratch.

“Begin creating your kitchen by doing what you can, wherever you are, with what you have on hand. Your kitchen can be a knife and a cutting board balanced on the tailgate of your truck parked at the beach.” (Here I wonder if Burnside has been peeking inside my dreams at night, that sounds like the best ‘kitchen’ ever!). She then starts us off easy with a chapter on beverages, and moves on to Morning Meals, Soups and Sauces, Salads, Veggie Entrees, Fish and Meat and finishes with chapters on Breads and Desserts. Some of the recipes I’ve marked are “Asian Salad Rolls with Chile-Lime Dipping Sauce and Gado-Gado”, “Granny’s Stuffed Artichokes” and Tempeh and Chard Enchiladas.” The salad dressings chapter is especially exciting to me as I’ve long spent way to much on pre-prepared (and less-fresh) versions.

The photography is gorgeous and inspirational, and most chapters have instructional pages; for instance, the Salads section has details about how to sprout various seeds, what kinds of roots and firm veggies combine well in salads (and how to cut, grate, or chop them).

You can read an informative Q&A with author Robin Burnside here (details on how to prepare egglplants and artichokes!)