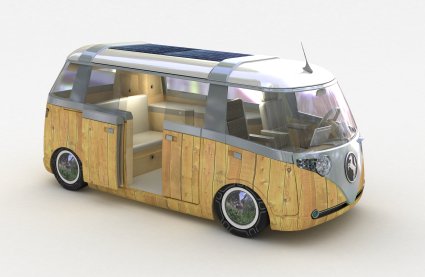 Twenty years ago when I travelled all over the country to see the Grateful Dead, I always thought it would be cool to have a Westfalia VW van to travel around in. Cruising the parking lot of a show I loved to poke my head in the Westfalia’s, checking them out and fantasizing about the owner’s seemingly carefree life. While that was a long time ago, the idea has been stored way back in my subconscious, until now.

Flipping through Time Magazine’s November supplement Style & Design I discovered the Westfalia Verdier Solar Power.  Created by Alexander Verdier, this hybrid camper is outfitted with solar panels that provide electricity for the on-board accessories while the vehicle is stationary.  There is an on-board computer and a GPS (Global Positioning System) that calculates the optimal position for the solar panels which are dubbed “Sun Tracker.” 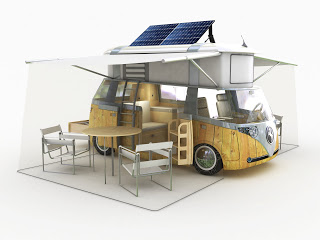 Some other improvements from the 1960’s version include, a pneumatic suspension, which lowers the vehicle and sets its structure on the tires for improved comfort and a better stabilization in the stationary position. The sliding half-door on the passenger side has an integrated folding staircase which makes the second stage area accessible from outside the vehicle. The passenger seat is transformed mechanically into stairs so that the second stage area (top level) can be easily reached from inside. A swivel cooking range makes it possible to cook outside as well as inside.  And of course, there’s a multi-media computer with a wireless Internet connection.

To really see how cool this “van” is, check out out a video by clicking here.

Jerry Garcia might be dead but the dream is alive today! I’m fantasizing right now about going with my husband and kids across country in this chic and environmentally friendly Westfalia rendition. Oh how I am ready to go on the road again! The Verdier will not be available until 2009 but they are taking reservations now.  Shoot, it’s $129,000.  Ok the dream is dead.

Best Office Air Cleaners: Get Your Indoor Plant On

In Case You Needed Another Reason to Bring Your Own Bottle