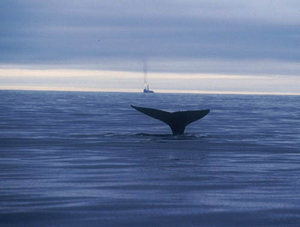 Sometimes environmental victories come in unlikely packages. The Russian government announced this week that it is putting the nix on Shell Oil Company’s plans to pursue the “Sakhalin II” project, a project to extract, exploit, and transport fossil fuels through both on and offshore pipelines in a remote part of Russia, Sakhalin Island. Sakhalin Island is off of the East coast of Russia, right above Japan. The Russian government is claiming environmental concerns for their decision. The international money grabbers (the usual players; Western governments and international money lenders) are pissed, but environmentalists are celebrating.

Sakhalin Island was once a prison colony; it is located far enough north that the sea freezes above the island every year. There are 11 endangered species in the waters off its shore, including the Western Grey Whale, whose populations are really endangered. Pipelines would also run over a thousand waterways on the island where endangered salmon spawn. The threat of the project is its potential to dump, spill, and leak oil, and then what to do with the resulting dredge material. The safety specs for the project do not meet international environmental standards.

WWF has been monitoring the situation and putting pressure on the money lender.

And there is a specific website dedicated to an environmental watch of the island if you are interested to know more. For now, this decision by the Russian government (even if it is politically charged for selfish reasons) sends a message to those hellbent on exploiting as much as they can while supplies last; protecting the environment can be more important than extracting the fossil fuel.