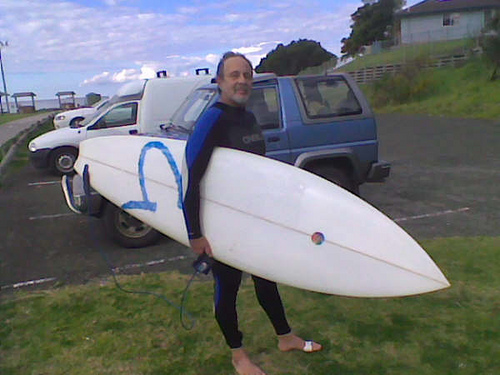 Ed. Note: My Dad, Gerry Vartan, is a lifelong surfer (see bio below); this is him with his board. I can never remember a time when my Dad wasn’t scanning the ocean near his Sydney home to check out the breaks; he’s been surfing much longer than I’ve been around. I asked him to write about what surfing means to him.

International Surfing Day is on June 20th, which this year is a Saturday & also my wedding anniversary! I hope everyone has a good time and catches lot of waves & cleans up all the mess. It’s for a worthy cause (leave nothing on the beach except your footprints). I applaud all the sponsors for their doing something for the ocean & promoting themselves rather than just promoting themselves.

Will I be out in the water? Well after you’ve read my piece below you will see that it will depend.

1. What Surfing Is Not

Surfing ain’t no sport. If you think that surfing is a sport you’re wrong. And it has absolutely nothing to do with the Internet.

Making personal outdoor physical activity into a sport has taken away the subtle & personal interaction people have with the natural environment. The sport of surfing is the antithesis of surfing.

This idea is nothing new. Sport is a great way to pit one person against another, get the crowds to gather around to cheer & boo, place bets and see which gladiator can kill the other first! The winner used an Acme sword so there will be a run on those in the stalls. People will proudly display their own Acme sword and so convince everyone they are as brave, powerful and as strong a fighter as the winning gladiator! If they can’t afford the sword or have no need of one they’ll buy the t-shirt!

Competitions, competitions, competitions, all the time. Everything shown or talked about surfing today is about COMPETITIONS! Even Rip Curl, one of the founders of surfing equipment has changed. They used to have a slogan: The Search; which promoted the idea of the lone surfer or small group searching for the perfect solitary break somewhere in the world, where you could get away from rat race world and enjoy and play in nature’s backyard. That has all changed. It’s now “know your weapon” when choosing a board; they are promoting themselves as a competitive surfer’s company. News is about competitions and they make mountain gear, eyewear, footwear, watches, and bloody little blue or pink vests for being towed behind a power boat on a water ski!! Rubbish!

Even the big wave riders now must COMPETE with the wave. The tired, old “man against nature” religious fear trip will be forever pushed upon us so we can be controlled.

Aside from NOT being a sport, surfing IS NOT a lot of things. It’s not dry, not comfortable, not easy, not organised, not authoritarian, not predicable & has no rules (except one: do not drop in). It has nothing to do with a ball, a team & does not require mechanised or motorised equipment.

There are no crowds, no one organising you, no one bossing you around, no ripping off of shirts and running around, and no punching the air with your arm (their ain’t no one to see you). You hardly need any money to do it. And it’s not good for hairstyles.

Which, in the “cathedrals of commerce” world we live in is just not on?!?!

Surfing is YOYO – (You’re On Your Own) It probably the most exciting immersed-in-nature activity you can do. It is solitary, addictive, unorganised, gimmick free, full body, full on senses activity. It can be dangerous. And it’s remarkably free from bullshit.

And surfing is about THE WAVE. The shape of the wave, riding the wave, dancing with the wave, feeling the wave and being part of the energy of the wave. The rest of surfing stuff it is ancillary.

Sometimes you might get lucky & see a smiling dolphin surfing just inside the face of the wave next to you! Or you’ll be out there waiting for a wave just talking to the sea gulls or cormorants.

To surf you have to feel at home in the water. You have to feel part of what’s going on around you; the natural peace, sounds, movement of the water, the hypnotic sparkles of sunlight on the sea, And you have to be AS ONE with the sea, you have to flow with all of it. No matter how great & wonderful you think you are you are not going fight it and win.

Just because you are good at another physical activity don’t think you can just rush out and start riding waves. It ain’t going to happen. I have seen very fit people who excelled in another type of sport get angry with themselves (“I can’t believe I can’t do that”). You will have to spend many, many hours in the water to get even reasonably OK at surfing. The older you are the harder it is. And remember most of the time the surf is not conducive to surfing.

And nature, not this or that organisation, the calendar or your wife, husband, girlfriend, boyfriend, mother or father determines when you surf. It is not a case of “hey, let’s go surfing next Thursday at 2:15″.

EXPERIENCES THAT COME CLOSE TO THE FEELING. Riding a roller coaster, snowboarding, hang gliding & Parkour (even though it’s an urban environment activity it comes very close in terms of fitness, balance, timing, 3 dimensional movement & fast use of your body and mind).

1. Where you want to surf
2. Size of swell.
3. Direction of swell
4. Wind speed
5. Wind direction
6. Incoming or outgoing tide

If after all this you feel that you must at least try to surf, rent or borrow a board & GO OUT WITH SOMEONE WHO IS WATER SMART OR ALREADY SURF PROFICIENT. You’ll probably start by flouncing around in the white water and tumbling around in the shore break. But much later, if you get addicted, you’ll end up spending every spare minute in the water winter or summer. You’ll get up very early, before work, and be doing the ‘dawn patrol’. And probably be out in the water as the sun comes up!. You’ll know when it happens. Do it for yourself alone, not peer pressure or because you must do the ‘latest thing”.

Surfing has had its ebbs & flows. Up to 15 years ago it was an ‘anti-social’ activity (which it really still is) that had a ‘rebel’ image about it. And not many people did it. It has now come back even bigger than during the 60’s with the Beach Boys and all the corny Hollywood surfing movies. If you’re also interested in paddle boarding, check out SUP Boards Review here.

And it will probably go out of fashion again (I can’t wait).

Gerry Vartan began surfing in 1964 when he was a lifeguard at Rockaway Beach, New York. There he joined 2 other crazies who started the first east cost surfing magazine, Atlantic Surfing. He opened up Puerto Rico to surfing and named a number of breaks including Rincon East (where once stood only palm trees, the surf break & Marie’s little general store wooden shack, and is now a 5 star resort). After a 9 year break in Canada because of the illegal war in Vietnam ( didn’t want to shoot anyone or get his ass shot off) he moved to Sydney, Australia and has surfed the Maldives 5 times, Java any number of times and the east coast of Australia constantly. He now lives by the sea in Coledale about 50 miles South of Sydney. He surfs when there’s surf, which is least twice a week. He has been married to painter Kris Ammitzboll for 20 years, and has one daughter, Starre Vartan, one lovely cat, Chloe, and the heart of a 35-year-old man (literally, as he had a heart transplant three years ago).

If Trees Could Talk Caption Contest

Change of Consciousness or Change of Advertising Strategy?