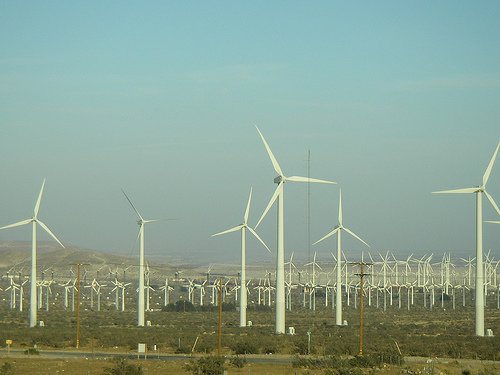 I took this photo of the wind turbines in Palm Springs, CA

I’ve heard the two windiest spots on our planet are the Coachella Valley of California and South Africa. The wind in California has prompted the installation of thousands of windmills in the Coachella Valley, which generate electricity for nearby Palm Springs and areas spreading toward the Los Angeles basin.

Standing majestically, like some invasive alien lifeform or uniform militia, the windmills have now become the major landmark of the Palm Springs region. Assembled in the desert like something out of a Pink Floyd movie, with towers as high as 150 feet and turbines as wide as the wings of a 747, the windmills are striking. 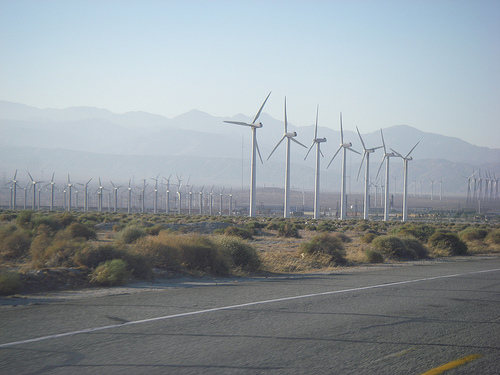 The American Wind Energy Association calculates there is enough available land in the Midwest or in just 100 square miles of Nevada’s windiest regions, to house enough wind farms to supply the energy needed to power the United States. The U.S. has been slow to move into wind power, although it is now picking up significantly. In the early years of development, windmills were simply too expensive to produce, install, and maintain. However, over the last ten years, the expense of windmill power has dropped over 80%. Following in the footsteps of progressive countries, such as Denmark, where over 10% of energy is windmill generated, the U.S. has finally been increasing wind energy production.

There are three main arguments against wind farms:
-the environmental impact of the windmills
-energy used to produce and store energy
-the usual NIMBY (Not In My Back Yard) syndrome.

As far as the environmental impact goes, massive turbines can disrupt local ecosystems and wildlife. For example, flight patterns of migratory birds have been altered and birds have died due to collisions. A solution to this is that wind farmers and scientists are working together to avoid placing windmills along flight and migration paths, while also working to avoid endangered plant and animal territory.

The production of the windmills is not without the depletion of non-renewable resources. The storage of the energy harnessed requires battery use, which means toxic waste. The windmills can be massive, which requires large transportation services as well as the use of raw materials to build them.

As for NIMBY, the windmills can cause a fair amount of noise pollution. Besides noise, some people consider windmill farms eyesores. Some people think these problems can be avoided through decentralization of power generation. By going ‘off the grid’ and building homes in windy areas, people can have their own windmills right in their back yard. (RITBY?) Excess energy can be sold to local utilities, which makes the turbines a good long-term investment.

In this time of climate crisis, utility companies need to be willing to participate in a metering program in order for this to happen and right now, the U.S. still has a far way to go before this works as well as it could. Energy utilities generally only pay 35-40% of the retail rate (due to government energy subsidies.) This could be interpreted as a way to dissuade individuals from pursuing this type of self-sufficiency. Wind certainly seems to be a better option, in comparison to coal, oil or nuclear energy. 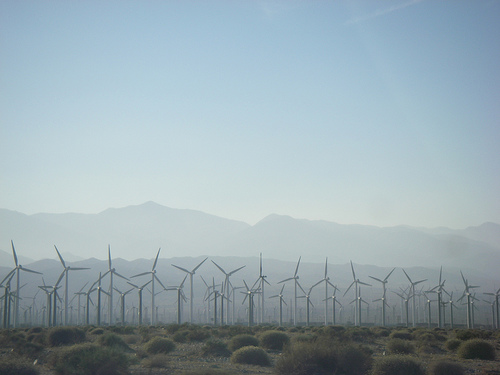 Consumer Reports Does It in Green

Play the Stars and Stinkers Game!