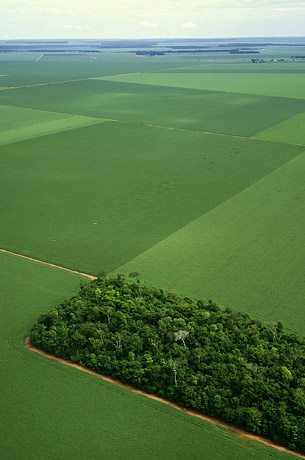 This image of razed rainforest in Brazil’s Mato Grasso that’s now planted with soybeans (from which to make fuel) is my definition of a travesty. That’s a bit of transitional forest in the foreground, nature hemmed into a tidy square so the developer can claim ‘conservation’ not doubt.

Time Magazine’s cover story, “The Clean Energy Scam” goes into the details of why ethanol and biofuels made from planting crops aren’t going to solve our global warming problems and in fact, may exacerbate them, creating food shortages to boot. Check it.

From his Cessna a mile above the southern Amazon, John Carter looks down on the destruction of the world’s greatest ecological jewel. He watches men converting rain forest into cattle pastures and soybean fields with bulldozers and chains. He sees fires wiping out such gigantic swaths of jungle that scientists now debate the “savannization” of the Amazon. Brazil just announced that deforestation is on track to double this year; Carter, a Texas cowboy with all the subtlety of a chainsaw, says it’s going to get worse fast. “It gives me goose bumps,” says Carter, who founded a nonprofit to promote sustainable ranching on the Amazon frontier. “It’s like witnessing a rape.”