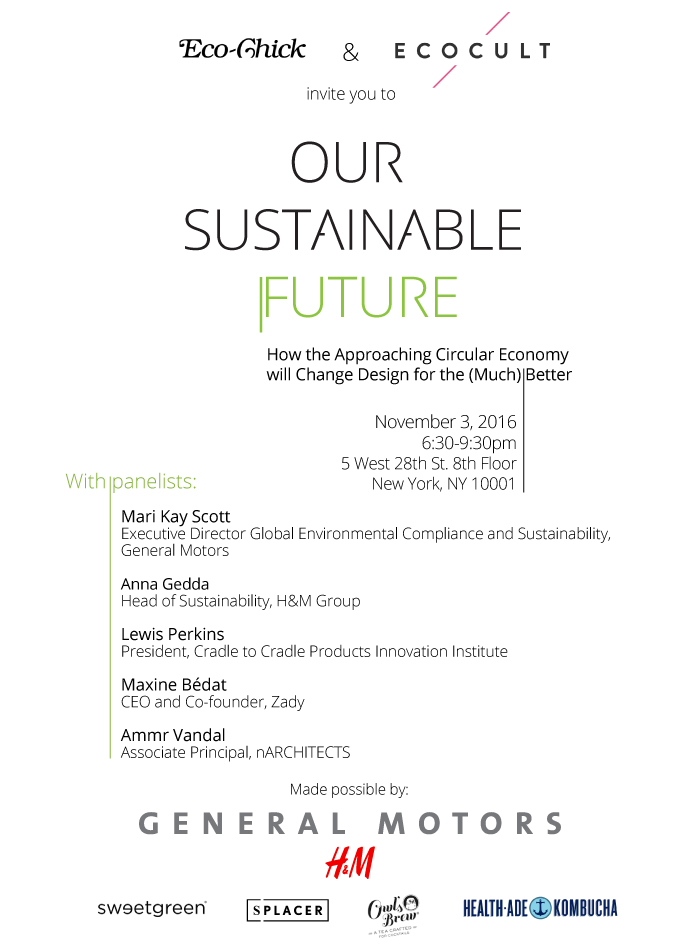 We’ve teamed up with Alden Wicker over at EcoCult for an incredible event on November 3rd in NYC: We hope you can join us!

But what does it mean to be circular?

The next step in sustainable production is the circular economy. We are leaving behind the old ideas of make, use, dispose and the wasteful world that is the result of that tired, linear thinking. The future is one in which products are made transparently; are built to last; hold value throughout their use phase; and at end-of-life can be transformed, recovered, or otherwise improve the environment.

Circularity means asking the question: What if making stuff not only had less impact, but had none—or even improved our air, water, or soil?

To entice you even further, we’ll have cocktails by Owl’s Brew, healthy bites by SweetGreen, beverages by Health-Ade Kombucha, and we found the gorgeous venue through the platform Splacer! It’s at: 5 West 28th St. 8th Floor, New York, NY 10001 (between B’Way and 5th) 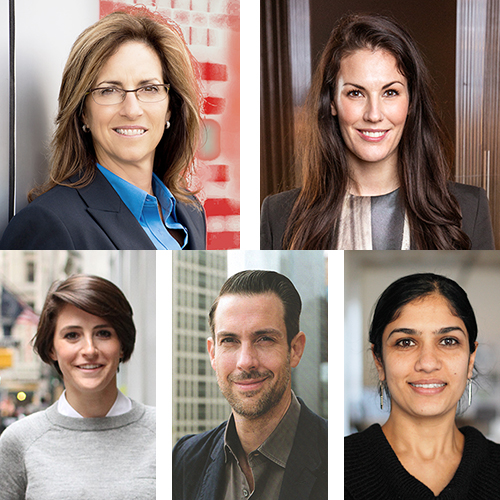 Our Panelists Are (Clockwise from top):

Mari Kay Scott – Executive Director Global Environmental Compliance and Sustainability, General Motors. Scott ensures GM’s operations effectively measure and manage their environmental performance and reduce their carbon footprint through energy efficiency, water conservation and renewable energy use. Scott joined GM in 1984 and has held positions in engineering, maintenance and manufacturing. More than half of her career has been spent in the GM Worldwide Faculties Group managing environmental compliance. Scott earned a bachelor’s degree in general engineering from the University of Illinois at Urbana – Champaign.

Ammr Vandal – Associate Principal, nARCHITECTS. Ammr received a Master of Architecture from GSAPP at Columbia University, after earning her Bachelor of Arts in Economics from the College of Wooster, in Ohio. Prior to joining nARCHITECTS, she trained in New York, Caracas, and Pakistan. At nARCHITECTS, Ammr has led several award winning projects at the office, including Carmel Place (micro apartments), Wyckoff House Museum in Brooklyn, and Forest Pavilion in Taiwan and is currently Associate Principal-in-Charge of A/D/O in Brooklyn.

Lewis Perkins – President, Cradle to Cradle Products Innovation Institute. Prior to joining C2C, Lewis consulted to companies both big and small on creating programs and awareness for environmental and social initiatives. Perkins led the “green” charge as director of sustainable strategies for The Mohawk Group, a leading carpet manufacturer and commercial division of Mohawk Industries.  Perkins has served in a strategic role with such organizations as The Clean Air Campaign, 360i, USWeb/ CKS and The Robert W. Woodruff Arts Center.

Maxine Bédat – CEO and Co-Founder, Zady. As the co-founder of Zady, which empowers customers to learn about the conscious consumer movement and purchase beautifully constructed goods created with craftsmanship and artisanship, Bédat is a leading authority on sustainability in the apparel supply chain and applying a mission and storytelling to brand development. Previously, Bédat worked in international law and advocacy, first at the UN General Assembly and later at the International Criminal Tribunal for Rwanda.

I’ll be moderating (I’m the founder and editor of Eco-Chick!)

It’s going to be a wonderful night, and we love to meet our fans and friends, so we hope you’ll reserve a ticket and come see us!