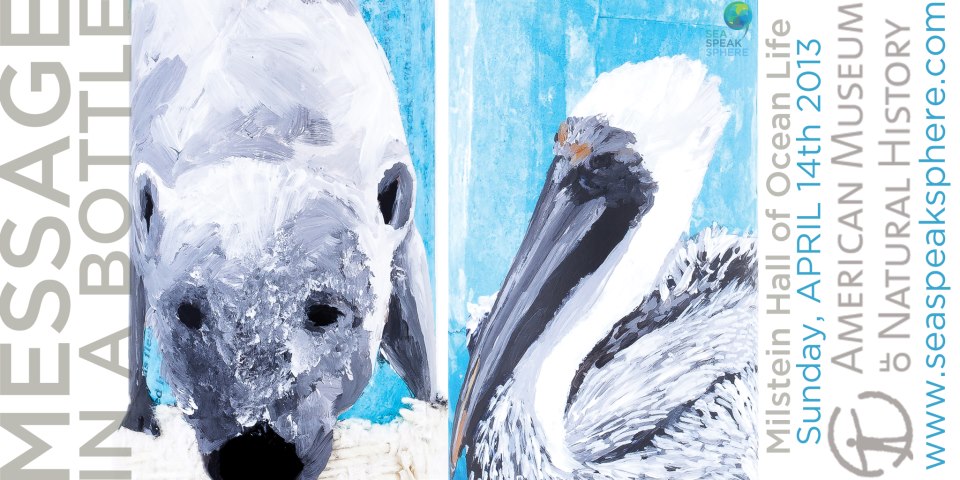 A special installation of Asher Jay’s visually arresting campaign of hand-painted PET bottles titled SEA SPEAK SPHERE: MESSAGE IN A BOTTLE will be on display this Sunday at the American Museum of Natural History at “Island Life.”

Asher Jay’s Message in a Bottle showcase presently consists of a hanging display of 200 plastic bottles, each eloquently hand illustrated by Jay to represent a unique message from an illustrious conservation-aligned individual. The campaign now contains 200 messages by 200 prominent ocean voices.

“To me, Message in a Bottle is a growing participatory movement that involves people from all age groups and walks of life. It is both democratic and universal in its appeal; thus it serves as an effective visual petition and time capsule for the environmental concerns and conservation agendas of the Anthropocene. It offers a singular creative platform for the simultaneous address of diverse perspectives, so viewers can be engaged by a multitude of insights, ideas, and personal experiences. It is important we each find a way to connect with the world around us, and through this campaign I am able to facilitate the internalization of interdependence in every person that interfaces with it.

My passion for all things wild imbues me with the motivation to produce concise, relatable mixed media artworks that empower the people who encounter them. The images I have illustrated on each PET bottle that encompasses this showcase, portrays the message each individual has dropped into their respective synthetic vessels. This way I have metaphorically and literally fed every eco-conscious memo contributed to this undertaking through the neck of the plastic age.”

From the Cocos Island off of the coast of Costa Rica to the famed Galapagos, oceanic islands foster a vast array of cultures, wondrous biodiversity, and diverse environments. Their pristine waters are home to fascinating species ranging from sharks to corals, while the islands themselves feature a variety of plant and animal life, much of which is uniquely endemic to specific islands, and others of which have yet to be discovered. Join scientists Jenny Newell, Christopher Filardi and Chris Meyer as they explore what scientists have learned about island species with a focus on current island discovery, adventure, and cutting-edge science. Experience a live animal encounter with Zoologist and naturalist Jarod Miller.