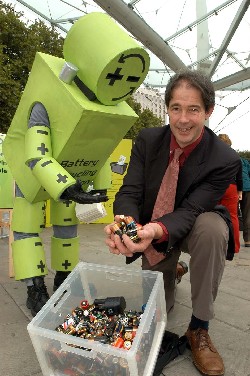 I don’t know who the heck that guy is on the right, but wouldn’t it be cool if a giant battery robot showed up at your house to help you recycle?

How can I recycle batteries?
—Barbara Kenopsky, Milford, CT

Somehow, it happens: You end up with a drawer full of spent batteries and no idea what to do with them. You have a nagging feeling they shouldn’t be thrown in the trash, and you’re wise to be cautious. “Batteries contain heavy metals such as mercury, lead, and cadmium, which can contaminate the environment when improperly disposed of,” says Roxanne Smith, a press officer for the Environmental Protection Agency. “When incinerated, certain metals might be released into the air or can concentrate in the ash produced by the combustion process.”

Among the most worrisome of those metals is mercury, which is toxic on its own but even more so when it binds to organic molecules in the environment and becomes methylmercury. Increasing in concentration as it works its way up the food chain, methylmercury accumulates in fish, birds, and humans. The good news is the mercury found in some disposable batteries has fallen by 97 percent since 1984. The bad news is the mercury reductions can allow municipalities to exempt some single-use batteries from hazardous waste regulations. (Find out if yours accepts them by calling your town’s sanitation department.)

Using rechargeable batteries reduces the volume of single-use ones headed for landfills, but keep in mind that they also contain heavy metals. Rechargeables in gadgets like cell phones, computers, and power tools are now accepted at many stores. (Find a drop-off site near you at the Rechargeable Battery Recycling Corporation or Earth 911.) Most jewelry stores collect button batteries (like those found in watches), and auto repair shops are required to take used lead-based car batteries.

Send your most vexing questions to [email protected]

Simple Ways to a Green 2008 Holiday