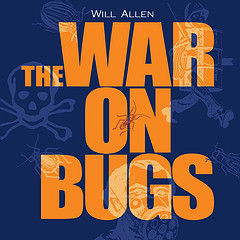 For anyone else who digs on books that examine how PR shapes public perception, Will Allen’s new book, The War on Bugs is the latest in a genre that includes The Best War Ever and Toxic Sludge is Good for You. Instead of the now-tired observation that much of our food supply harms our bodies and destroys the land, Allen looks at the historical connection between advertising and agriculture and how toxins were marketed and sold to farmers to create The War on Bugs. (Fans of The Lorax might be surprised to see how else Dr. Suess put his talents to work — shilling for DDT and Standard Oil — before he spoke for the trees.)

Here’s an excerpt from a Q&A with Will Allen that I did for Chelsea Green.

BG: You’re an organic farmer, but you’re also an ex-Marine – and you were arrested and sentenced to a year in jail during the early 70s for civil rights and antiwar activism. That’s not a one-track life. Were there noticeable turning points for you?

WA: A turning point for me came during my time in the Marine Corps when I was dispossessed of the belief that as Marines we were protecting democracy, liberty, and freedom. I learned we were mostly protecting corporations. Some of our military actions, which may also include some kind of military analysis, while I was a Marine were in Lebanon, Cuba, and Vietnam. In Lebanon, we protected American corporations in the mid-East and mid-East allies, no matter how corrupt. In Cuba, we protected American businesses, a dictator, the ruling class that fled to Miami after the Revolution, and the Mafia drug cartels. In Vietnam we protected business interests, rice interests, illegal drug interests – the opium trade – and religious interests. We installed a Catholic president in a nation where 95% of the population was Buddhist and were shocked when he was assassinated. By 1963, I was protesting the Vietnam War in Chicago rallies and campus teach-ins.

WA: Advertising agencies made a quantum leap during the First World War. They did contract work for the government to sell the war and recruitment work for the Army, Navy, and Marine Corps. The country was isolationist at the time and not interested in getting into another of Europe’s seemingly endless string of wars. Advertisers were able to get enlistments up and the public to buy war bonds. The themes were: a “can do attitude”, (such as, if America enters the war we will win it), a patriotic obligation, and protecting the civil rights of occupied countries.

When the same advertising agencies sold chemicals to farmers and householders, their pitches were similar. We are at war, be patriotic, and “a can do attitude.” That attitude encouraged such boasts as “. . .We can grow more than any other farmers in the world”, which led to the common belief that American farmers are feeding the world.

WA: I think that when someone becomes as anti-war as I am, then whatever one does – whether it is organic farming or something else – the irrationality and injustice of war is never far from their consciousness. While farm wars and military wars are of a different scale, many of the chemical and mining corporations that make fertilizer and pesticides are also manufacturers of bombs, and other military hardware and software. I think the sooner we can stop the chemical and genetic war on the farms, and the mindset that we are at war with nature, the better we will be as a species. In a sense, it is hard to not think of the war every time I fire up a tractor or pump or generator or heater that runs on gas or diesel from war zones around the world, especially Iraq. For that reason, we are looking at all the alternatives to fossil fuels for moving vehicles and for stationary heaters and generators.

War is not what is going on at Cedar Circle Organic Farm (in East Thetford, Vermont). We have struggles with pests, including woodchucks, voles, birds, worms, fungi, insects and weeds and we’re able to overcome it. If your neighbors don’t invest in pest control, it doesn’t mean you shouldn’t do it too. We develop and copy strategies that are softer, non poisonous, and often very effective, and if those adopted strategies are not effective, then we contact a pest removal service. It is a process. We don’t have all the answers, but we have a lot more now than when we started in the 1960s.

Not Your Granny's Panties