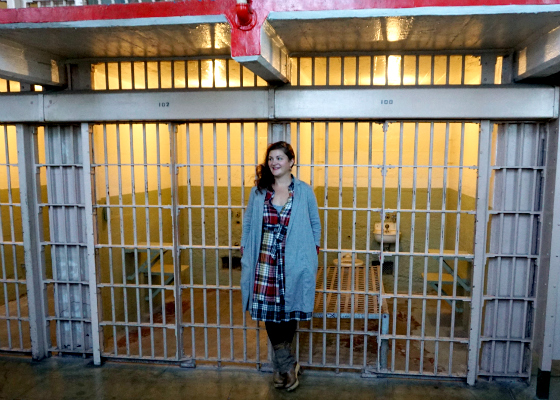 I’ve been living in the Bay Area for almost a year now, but I still hadn’t been to Alcatraz, the infamous prison that’s now a national park. You have to reserve ferry passage to the island several weeks in advance, so my partner and I finally got organized and we went last week. It was a fascinating experience, and I thought it would be an interesting place to show off some of the ethical fashions that UK’s Braintree Clothing have on offer for autumn.

(Use promo code ECOCHICK15 for 15% off at Braintree Clothing: No minimum spend necessary. Code can only be used once and not together with any other promotional code. Valid through 11/30/15. ) 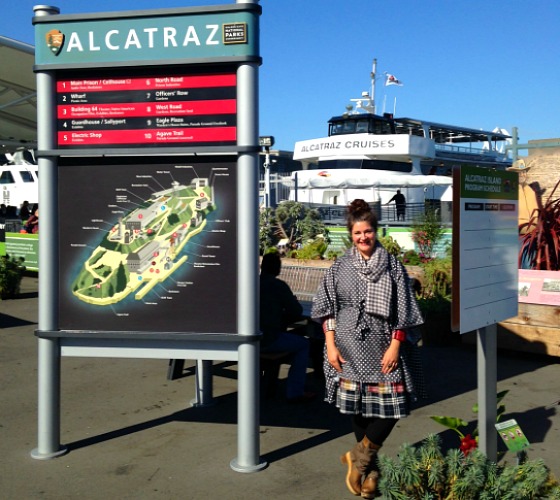 As mentioned above, to get to Alcatraz (which is an island with a former prison on it) one has to take a ferry, which you board at Pier 33 in San Francisco. 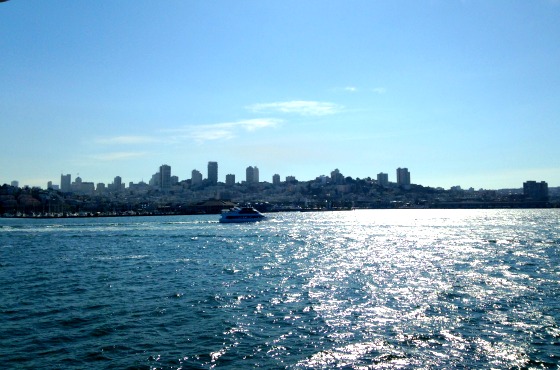 And then you head out into the open seas! (Just kidding, it’s the very protected San Francisco Bay and the voyage is all of 12 minutes, tops). But the views are fabulous. 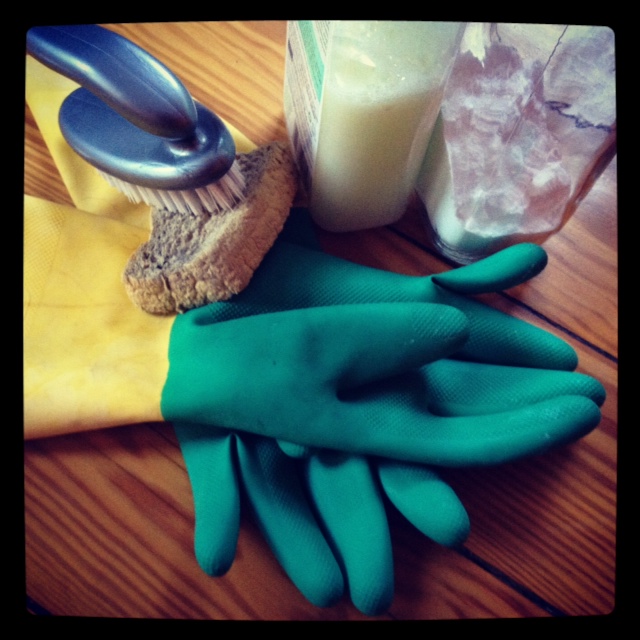 For the ride over I wore Braintree’s showerproof Cappa poncho made from 100% recycled PET (Yup, this poncho was once plastic water bottles!), and the Yalla Zee organic cotton and hemp-mix scarf over my dress and grey linen Notch jacket, which is by Ali Golden and Made in California. 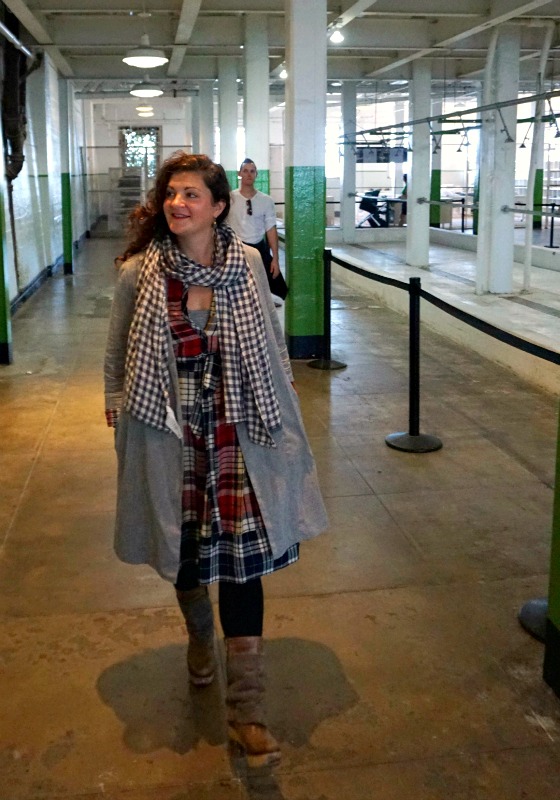 And then we arrived at the famous Alcatraz, which is managed now by the US Parks Service. The island was first a lighthouse, then the first West Coast military fortification, then a military prison, and then a federal penitentiary, from 1933-1963. It’s known not only for being very close to the city of San Francisco (just 1.5 miles) but for the famous criminals who lived here and for the daring escapes made from the prison. In 1969, the island was occupied by Native Americans and was a key part of the First Nations activism of that time period. 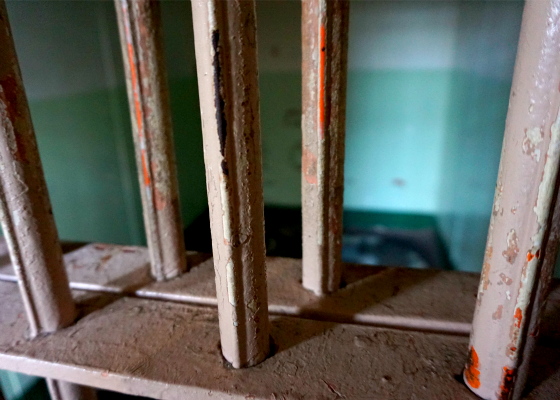 After a quick briefing from a Parks employee, we were free to roam the island and prison on our own time. We started where the prisoners used to—the shower room (you can see the showerheads in the image above on the right side behind me), and donned our headsets for the really well-organized audio tour that lets you hear about the former prison as told by the former prisoners who lived there. 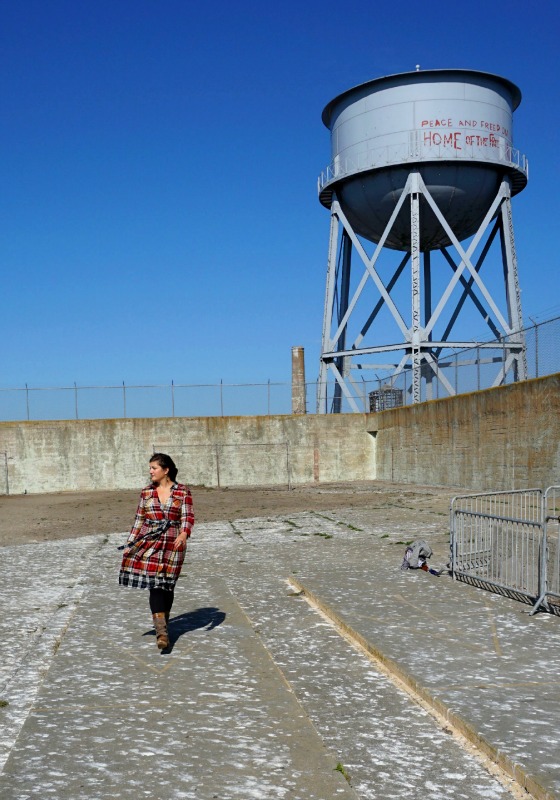 The yard was the only place prisoners were allowed outside, and it was precious to them.(In the image above, you can see the protest painting on the water tower done by the Native American occupiers of Alcatraz in 1969, which the Parks department has preserved as a part of the history and story of the island). 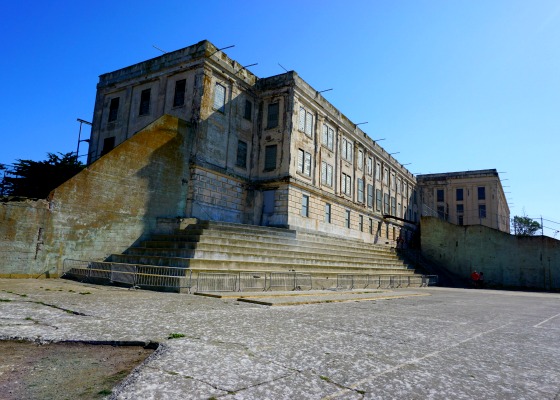 From the upper “gallery” or spectator area of the yard, you can see beautiful views of the Bay Area mountains and hills dipping into the sea, but from inside the yard, all you can see is the prison and the high walls covered in razor-wire. Standing out there, I closed my eyes and imagined what it must have looked like in the past when the men used to play baseball out here, and the steps were occupied by inmates, gathering in groups and those who were loners, likely smoking on their own. 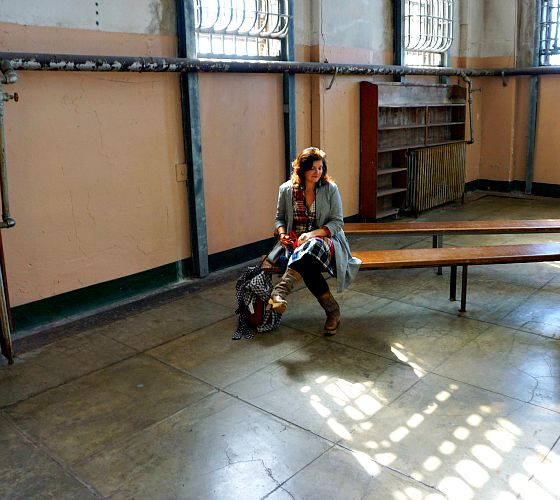 It has been a long time since anyone was a prisoner at Alcatraz; even the very youngest men who were there in the early 1960s are now older men. With time comes new perspectives; I found this former prison, now home to mostly birds and other wildlife, and parks employees, to be a gently crumbling beauty, which is why I shot these clothes there. I don’t mean to downplay the seriousness (or unfairness) of incarceration in America currently, and I hope nobody takes these images that way, since it has been more than 50 years since anyone was housed in these cells. Alcatraz is a relic and has had many lives. 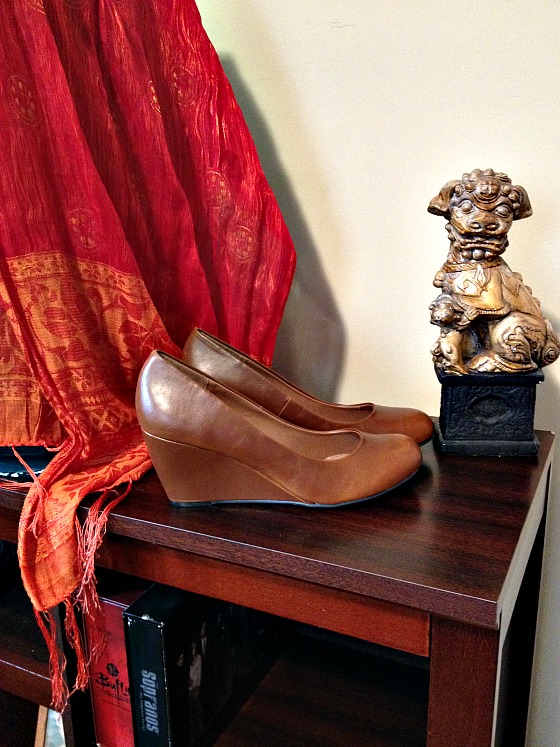 I was more interested in the slow decay of a once-feared institution and how nature expresses the passage of time on human buildings, which I found beautiful, frankly. Alcatraz, as it is today, is quite an interesting combination of military history, human experience, and the way nature washes away and blunts what people create. 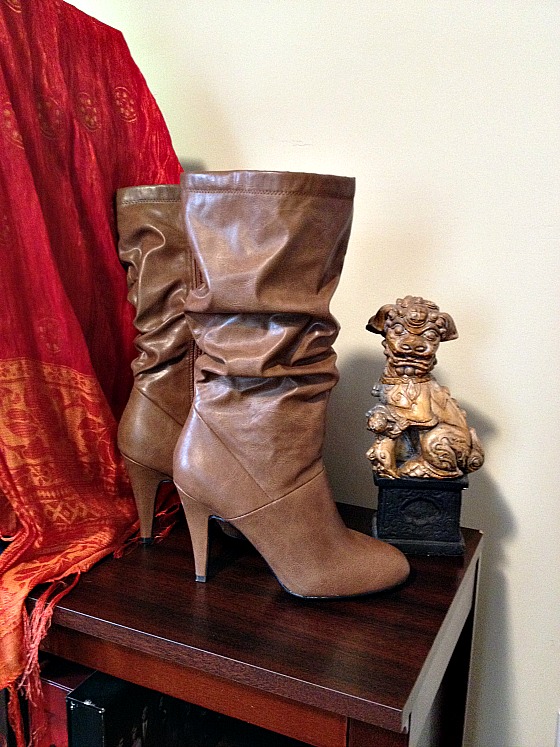 Braintree’s Macquairie Dress is probably the most perfect fall frock for adventures such as these. Its vibrant plaid pattern is a striking woven organic cotton and hemp mix, so it’s strong and will last for many, many years. Its versatile styling options (buttoned up to the neck for a vintage prairie girl look, or open as I have, with a cute camisole underneath; sleeves rolled up or down) are fun to play with, and it was comfortable to wear all day long. 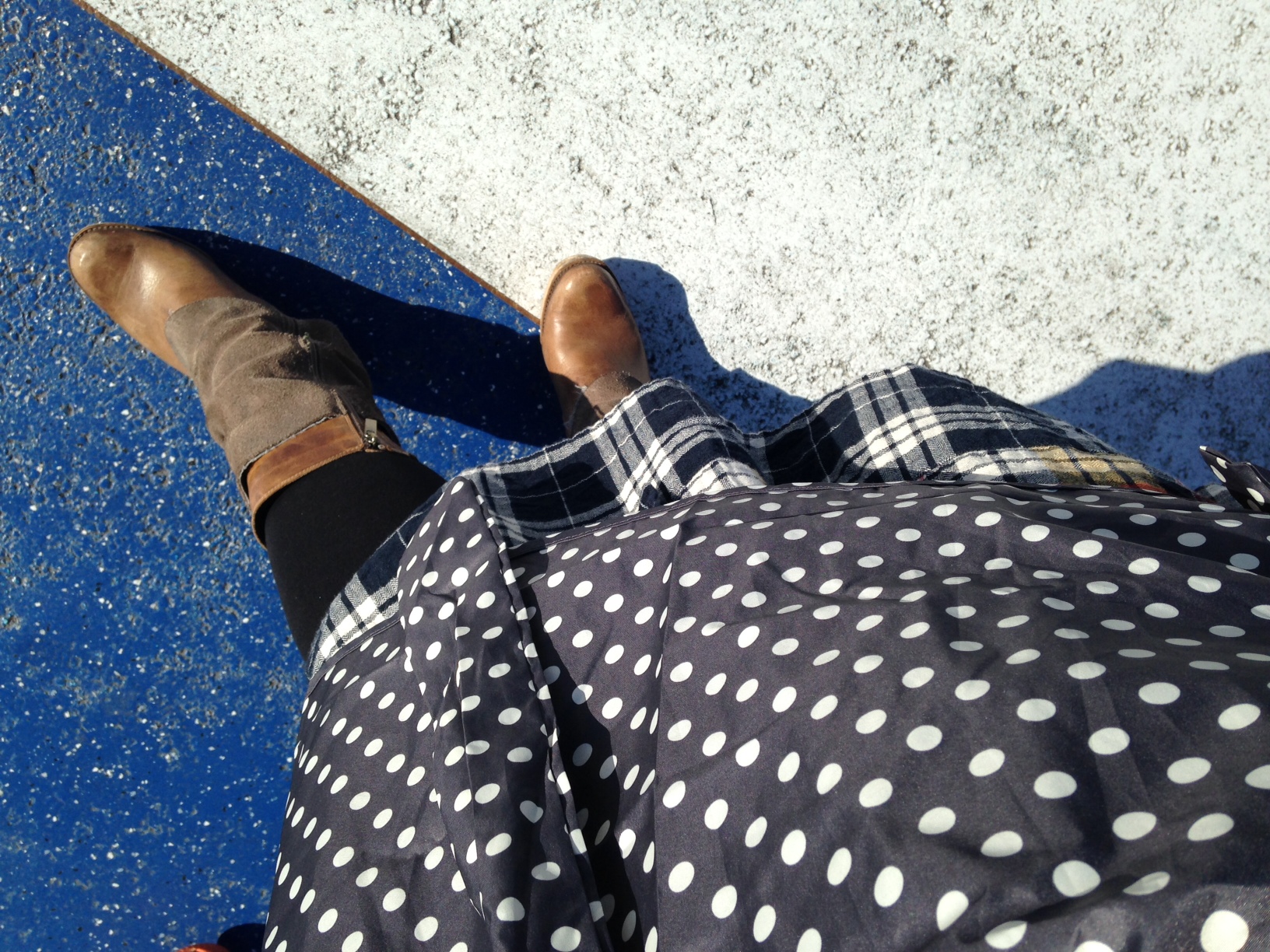 It was a long day we spent at Alcatraz (we brought a picnic—there’s no food for sale on the island), checking out all the nooks and crannies and enjoying the beautiful views. Soon, we were headed back across the Bay on the short ferry ride. 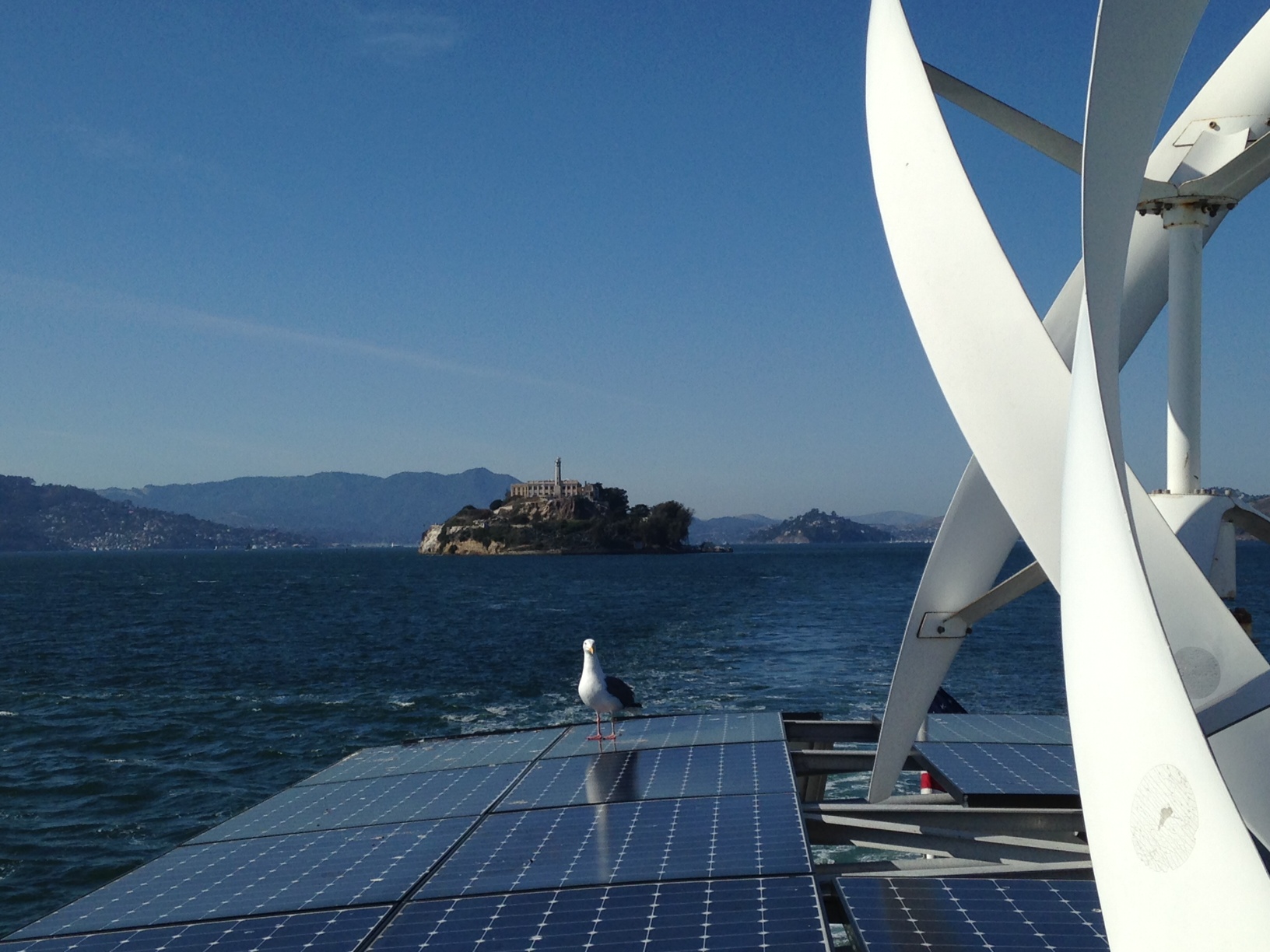 Loved the juxtaposition of this seagull hanging out on the solar panels, next to the wind turbine (which helped power the Alcatraz Ferry) with Alcatraz island in the background, which really tells the story of the past and future of the Bay Area melding in this particular voyage.

The Most Beautiful Shirt EVER