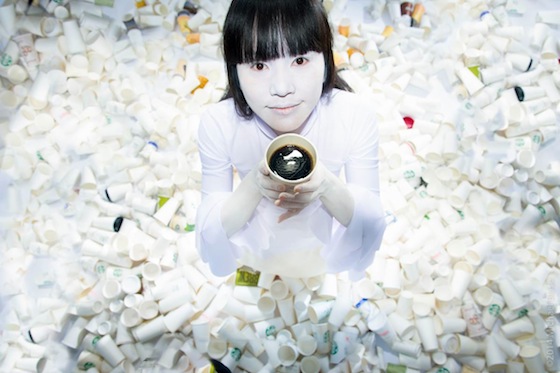 In the face of the seemingly insurmountable challenges and irrevocable damages that define the health of our planet, it is easy to deny or become apathetic. Endless blame games quickly become caustic and corrosive. Awareness easily morphs into paralysis.

Some struggle for measurable, easily-articulated and formulaic resolutions. Others process through dance.

I recently sat down with Butoh artist Vangeline to discuss her upcoming piece, WAKE UP AND SMELL THE COFFEE, which grapples with the weight of our habits—particularly the sacred practice of coffee drinking.

{WAKE UP AND SMELL THE COFFEE will run at the Triskelion Arts Center in Greenpoint, Brooklyn on Friday June 26th and Saturday June 27th at 8p. Tickets are available via Brown Paper Tickets (the Fair Trade Ticketing Company).} 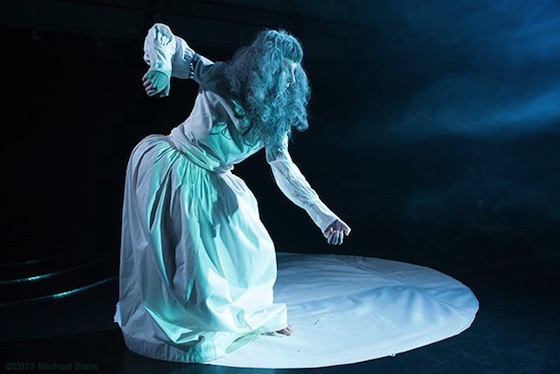 Butoh artist Vangeline was born in Burgundy, France and spent her childhood exploring dinosaur tracks with her paleontologist father and reading with her writer mother. Though she’s been happily ensconced in New York for 23 years, she still yearns for nature.

Her first gig was as a translator at the UN, after which she quit her job to become a jazz dancer and became a part of the burlesque revival. After 8 or so years dancing in night clubs and cabarets, a friend took her to see the Sankai Juku Butoh company at BAM and she says “…[my] world completely flipped and changed—upside down—in one hour and fifteen minutes. It was very profound and I quit everything I was doing… you have an awakening and you realize, ‘Well, I could get paid and continue what I’m doing comfortably, but it’s not really who I am.’ There’s a calling.”

Vangeline began studying, and her first Butoh piece was performed in December, 2002. Her company, Vangeline Theater, has been creating work ever since.

Vanity Fair Italia – Behind the Scenes with Vangeline Theater from Geoff Shelton on Vimeo.

Butoh, by nature, defies explanation. Its roots run deep into the subconscious and it often deals with taboo subject matter.

“Butoh is the things that we don’t want to look at—what we’re not exactly comfortable with—the taboo… It is linked to the parts of ourselves—the garbage—literally from the subconscious or the dark side that we don’t want to confront. For me garbage is the manifestation of our collective shadow and our lack of responsibility. I really don’t want to do this show to blame or to point fingers at people—for me it’s more of an admission of lack of responsibility—I’ve been drinking coffee from paper cups for 10 years. I’m doing something about it and I hope to inspire others to do the same.” 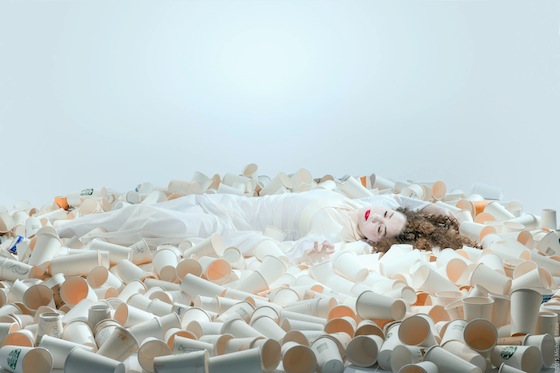 Vangeline’s own awakening to the impact of coffee cup waste inspired her to act. “Coffee cups are not recycled and they just pile up in a landfill somewhere. I was not aware of that at first, I actually really love drinking coffee—it’s one of the reasons that I wanted to do this show. I did research and found out that the coffee cups aren’t going anywhere—500 years from now they’ll still be sitting there in a landfill.”

The piece is heavily inspired by the weather and acts of nature (particularly Hurricane Sandy). The structure of the story follows the rise and fall of a great civilization. Once a major storm is weathered, people quickly try to continue moving in the same direction, but refusing to clean up their act causes them to fall once again.

In the program for the show, Vangeline quotes NYC-based artist Mary Mattingly on our approach to the world’s increasingly dramatic responses to its current condition. “In the face of every new disaster, media and the marketplace continue to endorse a techno-utopian idealization of the future: As we alter our own ability to inhabit the planet, we continue to believe we can counter the damage with another technological innovation.” 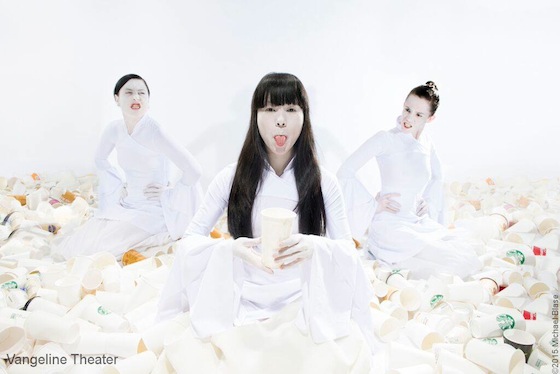 An excerpt from the program:

The set in front of you is made of over 1000 used coffee cups that Vangeline Theater dancers have been patiently collecting and cleaning between March and May 2015. This is the amount of coffee trash five individuals are able to generate in the course of three to four months. Coffee cups are generally coated with plastic, which makes them neither recyclable nor compostable. Paper and cardboard make up over 40 percent of the solid waste sent to die in North American landfills.

Massive efforts are undeniably necessary to reverse the trend, but the first step my indeed be the smallest. Recognizing the weight of individual choices and the consequences of passivity can empower and legitimize solo-actions which form communities over time.

All photos by Michael Blase.

Summer Reads: Back in Time to One 70s Counterculture Experiment in Vermont

Landfills Shouldn’t be Laundry Piles: We Are Tossing WAY Too Much Clothing