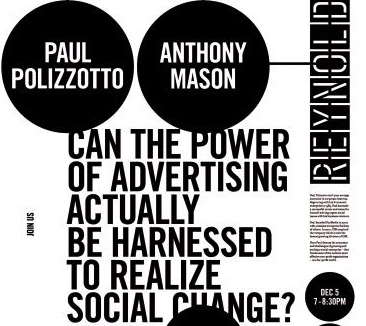 Can the Power of Advertising Actually Be Harnessed To Realize Social Change?

PAUL POLIZZOTTO’s career in social enterprise began in 1989 with his first venture, the industrial/environmental cleaning company Property Prep. A lifelong surfer, Paul melded his passion for the ocean with his talent for entrepreneurship and pioneered Urban Watershed Cleaning and Zero Discharge — two technologies which scrub toxins from parking lots and industrial sites, thus preventing run-off from entering storm drain systems and polluting the waters into which they feed.

As president of EcoMedia, the company he founded in 2002, Paul created and oversees the EcoAd, WellnessAd, and EducationAd programs. The EcoAd program was an Edison Award winner in 2012 for social innovation and the EducationAd and WellnessAd programs are 2013 winners for social impact.

Paul serves on the Board of Directors at Publicolor, the Board of Advisors at Waterkeeper Alliance, and is a Grades of Green Board Member. He is a frequent guest lecturer at business schools throughout the country, including at USC’s Marshall School of Business, where he is a Senior Fellow as well as an inaugural member of the Board of Advisors for the Society and Business Lab.

ANTHONY MASON is the co-host of “CBS This Morning: Saturday” and CBS News’ Senior Business Correspondent. He is also a frequent contributor of cultural stories to “CBS News Sunday Morning with Charles Osgood.” Mason has spent more than 30 years as a television journalist. In a quarter century as a correspondent for CBS News, he has reported from more than 30 countries and won eight Emmy Awards.

Mason joined CBS News in 1986. He was assigned to the London Bureau from 1987-1990 and traveled extensively, reporting for all CBS News broadcasts. He went into Afghanistan with the Mujahideen guerillas to cover the Soviet pullout; reported from Pakistan on the assassination of General Zia ul Haq and the rise of Benazir Bhutto; and went to the front lines in the Iran-Iraq war to witness Saddam Hussein’s use of chemical weapons on the Kurds. He also covered the bombing of Pan Am flight 103 over Lockerbie, Scotland.

In 1989, Mason was the first journalist to report on the exodus of East German refugees through Hungary as the Iron Curtain began to crack. He followed the story to Czechoslovakia and Poland as their communist governments collapsed. Mason’s work on the story won him the prestigious Alfred I. duPont-Columbia University Journalism Award presented to CBS News for its coverage of Eastern Europe.

From 1991 to 1993, Mason was CBS News’ Chief Moscow Correspondent, where he reported on the coup attempt against Mikhail Gorbachev in August 1991, the rise of Boris Yeltsin and the demise of the Soviet Union, coverage which won him an Emmy Award.

Mason was named CBS News’ Business Correspondent in 1998. His series, “Life and Debt in America,” which aired on the “CBS Evening News” in early 2008, underscored some of the problems that ultimately led to the financial crisis and won him another Emmy. At the end of 2008, the business website Marketwatch.com named him the “Broadcast Journalist of the Year.” Marketwatch.com’s media critic wrote that Mason “personified a dying art in the media today: explanatory journalism. Night after night, Mason took pains to help his viewers understand what was unfolding on Wall Street and in Washington – and, most important, why they should care.”

Mason hosts the annual “Money Issue” for “CBS News Sunday Morning with Charles Osgood“, in addition to serving as a regular contributor. He has profiled politicians (Bill Clinton), business leaders (Henry Paulson), and musicians (Bruce Springsteen, Paul McCartney, Keith Richards.) His series on crime writers – he profiled more than 40 of them over a decade – won the Raven award from the Mystery Writers of America. Mason was awarded another Emmy in October 2013 for his profile of Glen Campbell and the singer’s battle with Alzheimer’s disease.

For the past decade, Mason has also been involved in election coverage for CBS News, providing exit poll analysis during the primaries and on election night.

Prior to joining CBS News, Mason worked at KJRH-TV in Tulsa, Okla.; WCAU in Philadelphia; and WCBS-TV in New York City. Mason was born in New York City and is a graduate of St. George’s School and Georgetown University (B.A. 1980). He and his wife, Christina, have three children and live in Westchester County, N.Y.

Nuclear Power is NOT the Wave of the Future